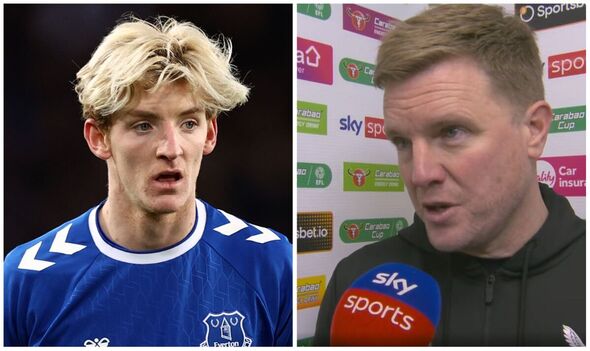 Newcastle United boss Eddie Howe declined to comment on speculation regarding a potential move for Everton forward Anthony Gordon after watching his side beat Southampton 1-0 on Tuesday night. The Magpies have reportedly held talks over a big-money transfer for the England Under-21 international to take place before the January 31 deadline, with Chelsea also in the race for his signature.

It is understood the two clubs have begun ‘formal discussions’ over a deal, with Everton hoping to receive around £55million for their academy star, who has scored three goals in 15 appearances this season in the Premier League.

After watching his side impress once again, Howe was asked for an update on the situation but the 44-year-old provided a predictable response, refusing to divulge information and claiming he had been focusing on the game instead.

“I can tell you absolutely nothing, I’ve been preparing for this game for two days,” Howe told Sky Sports after the game.

Newcastle are showing their ambition to break into the Big Six in the Premier League by rising to third in the league standings, having only lost one game of 19 this season. The signing sof Kieran Trippier and Bruno Guimaraes have underlined their hopes to play European football next season.

They already have one foot in the Carabao Cup final too after a 1-0 win at St Mary’s, with Joelinton’s close-range strike enough to give Howe’s men the advantage heading into the second leg.

And with success happening on the pitch, Howe is hoping for more good news away from it as the club chase several deals in the final days of the transfer window. Nicolo Zaniolo and Ivan Fresneda have both been linked with the club in addition to Gordon.

Gordon, who reportedly missed Everton training on Tuesday in a ‘planned absence’, has played a bit-part role in recent weeks after being benched by Frank Lampard.

The Everton boss was relieved of his duties on Monday after a run of nine defeats in 12 games left Everton down in 19th place in the Premier League, with relegation a real threat to the Merseyside club.

The Toffees could offload Gordon and midfielder Amadou Onana this month as the club prepare to bring in a new manager and that could work to Newcastle’s advantage, having had £35m and £40m bids rejected in the summer.

However, with Everton said to be holding out for a £55m fee, it remains to be seen whether the North East outfit – who have been careful not to risk a Financial Fair Play breach – would be willing to pay such an amount.