Two former Western Sydney Wanderers favourites have taken aim at the embattled A-Leagues club, with one accusing the current management of overseeing “the most toxic environment I’ve seen in 20 years of football” as Carl Robinson’s tenure as coach hangs in the balance.

Former Socceroo Dean Heffernan, who was the Wanderers’ A-League Women coach until this season, and Patrick Zwaanswijk, who joined as a senior men’s assistant last year and was seen as a coach on the rise, both spoke out after Saturday’s 1-0 defeat to the Central Coast Mariners continued the team’s miserable run. 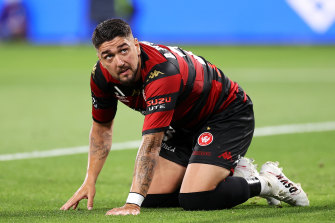 Dimitri Petratos and the Wanderers are flattering to deceive under Carl Robinson.Credit:Getty

Robinson’s position appears to be untenable, having won just two of his past 11 games at the helm, while the team has shown no other markers of progression during his 14-month reign. The Welshman admitted in his post-match media conference that he did not have the answers to Western Sydney’s attacking problems.

“It’s a really, really good question,” Robinson said when asked why his players, despite their experience and apparent quality, are not creating more clear-cut opportunities on goal. “The answer is I’m not sure.”

It was a clip of Robinson posted by a Wanderers’ fan media account on Twitter that attracted a pointed response from Heffernan, who said chairman Paul Lederer was completely unaware of the scale of the problems within the club.

“I can tell you Carl,” Heffernan wrote. “It’s because JT [CEO John Tsatsimas] and Gavin Costello [general manager of football operations] have created the most toxic environment I’ve seen in 20 years of football. Paul Lederer wouldn’t be aware of what goes on. How can 60-odd players and 4 coaches over 5 years be wrong. I rejected a 3rd year due to the above.”

In other tweets, he said: “It’s not the players. This has been happening for years now, most former players that walk in there say something’s not right here anymore. It [is] an energy and you feel it, and can smell it from the car park. It slowly seeps into you without even knowing. I was an empty shell in that place mate. It was a slow football death over 3 years of coaching. I’m happy in the corporate world now, where everyone works together to achieve goals.”

Zwaanswijk, who was deemed surplus to requirements by Robinson when he was appointed head coach late last year, replied: “I know 100% I wasn’t the only one. We will keep our heads up but won’t be silenced anymore. Truth hurts but is healing at the same time.”

On Saturday night, after their defeat to the Wanderers, Zwaanswijk wrote: “I once coached for this proud and fantastic supported club and because of 2 of the most mentioned names in the comments I’m no longer there. Unfortunately no club identity beside amazing supporters. I wish you all the best and good luck with the season.”

Zwaanswijk and Heffernan played together for the Central Coast Mariners, while Heffernan also played nine games for the Wanderers at the end of his professional career. 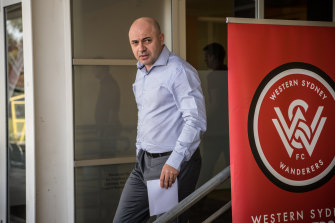 Wanderers CEO John Tsatsimas has been at the club since its inception in 2012.Credit:Wolter Peeters

Tsatsimas declined to comment on behalf of the Wanderers while Lederer did not return calls from the Herald.

Robinson, who was handed full control of the Wanderers’ football department when he controversially left the Newcastle Jets to join them in October 2020, said on Saturday night that he felt his players were shying away from taking shots on goal.

“I think we turned down too many opportunities, especially in the first half, to shoot, looking for the perfect goal,” he said. “If you’re waiting for the perfect goal, they don’t come along. It’s ricochets, it’s rebounds, it’s touches. There’s so many little things at the moment not going our way, that we haven’t got right, and we have to own it.”

Only Melbourne City have taken more shots on goal than the Wanderers in the A-League Men. Sources say patience is running thin with Robinson internally, and his removal appears to be a matter of time.

The Wanderers have not made the A-League Men finals in the past five seasons and have only one win from five games this term, as well as an embarrassing loss to APIA Leichhardt in the FFA Cup. In the A-League Women, they remain winless after their first three games.

Tsatsimas has been the club’s chief executive since the Wanderers were founded in 2012. Despite some initial success, including the famous 2014 AFC Champions League triumph, Tsatsimas and Lederer have overseen a disastrous on-field period for Western Sydney, having burned through four men’s coaches since the departure of Tony Popovic on the eve of the 2017-18 campaign – while in the A-League Women, they have only made the finals once in nine seasons.