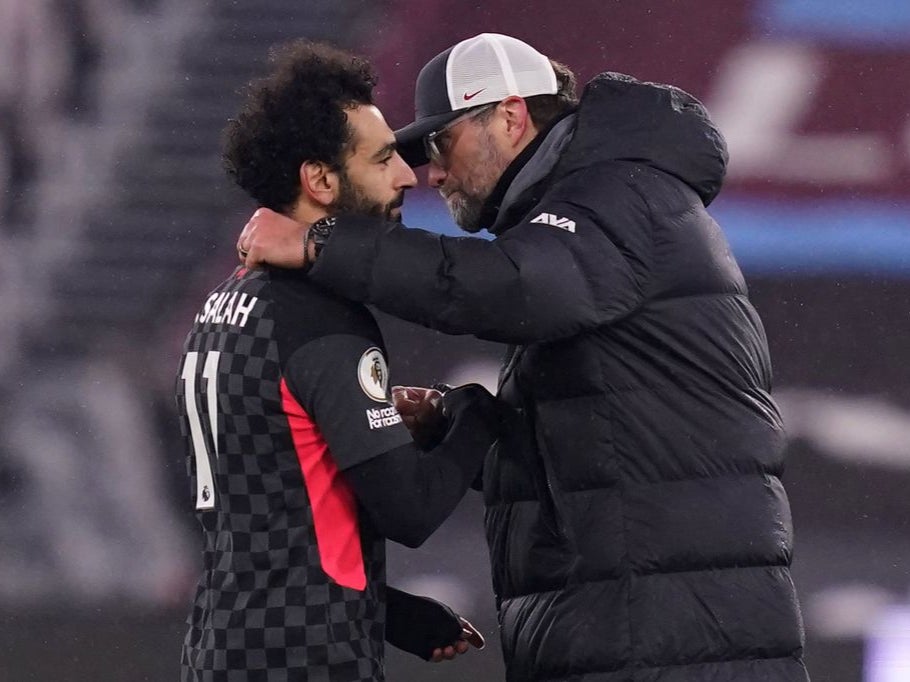 Mohamed Salah and Xherdan Shaqiri, both stationed inside West Ham’s box and aware of the right-back’s range, instantly turned and motored up the pitch.

The 22-year-old took the ball under his control, picked his head up once and parted West Ham with a long diagonal that perfectly fell into Shaqiri’s path.

The Swiss international gloriously hit a first-time cross that looped over Vladimir Coufal and Andriy Yarmolenko for Salah to swallow.

The Egyptian applied a heavenly touch to cushion the ball with his weaker foot before caressing in a delicate flick with his left.

A counter par excellence. A frame of Liverpool at their most fearsome: four players, two passes, a few seconds and … see you later.

“It was a lovely ball from Shaq for the second goal, I want to give him credit,” Salah said. “If it was a little bit short, I would have taken it with my left foot, but the ball was exactly at my feet so I had one touch with the right and then the finish.”

That was the second of three masterful goals from the Merseysiders at the London Stadium.

The Scouser delivered, driving the ball up before Alexander-Arnold fed him again. Jones played a one-two with Shaqiri, then supplied Salah hanging on the wide right of the box.

The forward kept the ball wrapped to his left and transformed Aaron Cresswell into a mere screen as he curled a precise strike into the far top corner.

Klopp revealed: “The last words I told Curtis was, ‘Please be cheeky, be cheeky and try something, be active and these kind of things.’ I didn’t think that he’d start that with his first touch! But it was good.”

The third was conjured from a pass masterclass before substitutes Alex Oxlade-Chamberlain and Roberto Firmino came alive, exchanging passes with the former sweetly flicking through for the Brazilian.

Liverpool’s No 9 dummied to shoot, but instead gift-wrapped a pass for Gini Wijnaldum to tap in.

All three efforts, different in nature, could be filed under art and when West Ham did showcase their prowess from a set-piece – Craig Dawson heading in a corner – the damage was already done, designed in beautiful fashion.

Salah was the chief artist in repainting Liverpool.

“Mo had a super game,” Klopp said. “He was really involved, he was flexible and all these kind of things.

“He kept the ball, passing was good, in the end with the controlling of the game he was really good. The first goal is just a super smart goal. I didn’t see it back, but from my perspective I think Fabianski couldn’t see the ball really because the box was full and he chipped it into the far corner.

“The second goal, what a counter-attack – two passes until Mo got the ball. The last pass was obviously spectacular from Shaq, the first touch from Mo outstanding, outstanding, world-class and then nice finish. Top game, top goals.”

For the second fixture in succession, both difficult away encounters made more taxing by their centre-back crisis, Liverpool have looked like themselves again.

Their key men – Alexander-Arnold, Salah, Firmino – have rediscovered their mojo, while Nat Phillips and Jordan Henderson have been steely in the heart of defence.

Shaqiri was a constant creative outlet on Sunday and Thiago continues to shape the team’s play while Wijnaldum sweeps up and serves it.

Liverpool seem to have weathered the worst in returning to their offensive best, and with Manchester City posting elite numbers since November, it’s not a second too soon.