Mikel Arteta says it is “time to deliver” for Arsenal as they chance a European place on the final day as Roy Hodgson is ‘knocked over’ by his Selhurst Park farewell.

Late goals from Gabriel Martinelli and Nicolas Pepe secured a 3-1 win for Arsenal against Crystal Palace, giving them a chance of finishing in a European place.

They remain in ninth, a point behind Tottenham in seventh on 59 points and Everton sandwiched in the middle. However, they can only secure a place in the Europa Conference League with hopes of finishing in the Europa League spots now out of their reach.

Arsenal host Brighton in their final game on Sunday, and Arteta wants his side to deliver. 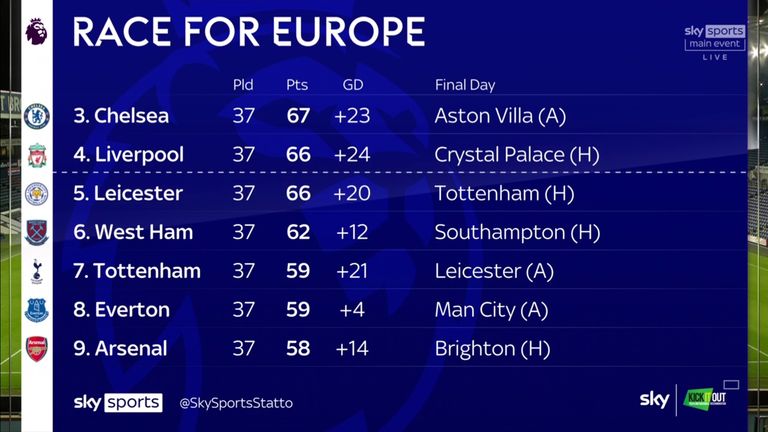 He said: “It was a crucial moment because we wanted to go into the final day with every chance to be in Europe next season. In order to do that we knew we had to win today and wait for some results, and with the way the game was developing, we were running out of time and it looked difficult. But at the end, we found a way to do it.

“You saw me on the touchline. I’m so happy. When you’re able to win a game in the last minute, it’s always really pleasing because it shows the team how much they want it and [how much they] believe up to the last whistle, so really good.

“We have to handle that situation [on Sunday]. If somebody were to say to us in November or December that we could be in the position that we are in to have the chance in the last game to qualify for Europe, we would have said you are crazy, but we have done it. I think with the results and the number of points that we have managed to get in those months, we have earned the right to be in that position. Now it’s time to deliver on the final day, but unfortunately, it’s not in our hands.”

It was an emotional night for Roy Hodgson and Crystal Palace too, with the manager announcing his departure from the club at the end of the season on Tuesday.

Hodgson was given a guard of honour by both teams ahead of kick-off, with a warm reception from the returning Crystal Palace fans. After the game, both Hodgson and his long-time assistant, Ray Lewington, were presented with keepsakes by club chairman Steve Parish.

But Hodgson was still in manager mode in his post-match press conference, and believes Crystal Palace deserved a point for their performance. 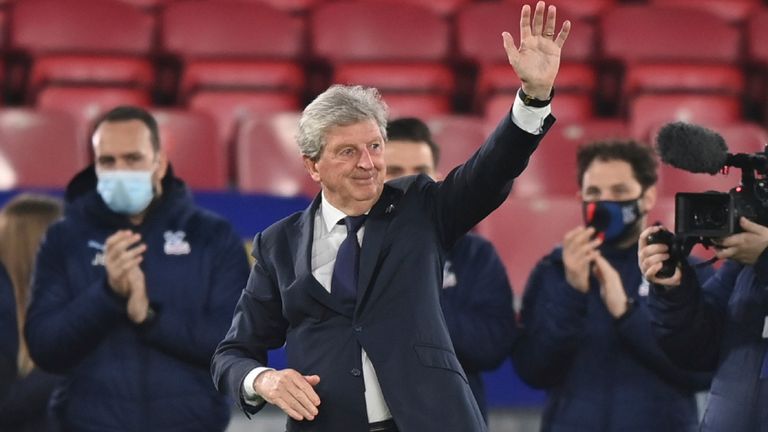 He said: “I’m a bit drained I suppose, it’s been such a fantastic couple of days. I’ve been really quite knocked over by all the kind words and everything that happened here tonight, and yet I’ve seen us lose a game in the last four or five minutes in which we were good value for at least a point.

“The football part of me still feels that, but I know that I should be seeing the bigger picture and celebrating the reception that I got – the guard of honour, I’ve never seen that happen before, the reception from the fans and what’s more, the performance the players gave me, especially in the second half when we really took the game to Arsenal and it looked as though we were capable of scoring against them.

“I hope when the dust settles, I’ll have a happier feeling about what happened here tonight, but one thing I certainly will never forget is the reception that I’ve been given or all the incredibly nice things that have been said about my career. I suppose that does count for more than 90 minutes at the end of the day.

They've given everything for the club 👊 pic.twitter.com/cNuV7C6CUi

“I thought Arsenal started well and we weren’t getting as close to them or stopping them in the way we would like, but we certainly did in the second half. I thought we were in control for large periods of the game so that makes the actual defeat a tough pill to swallow.

“I’ve got no regrets at all for the performance and I’m full of praise for the players in light of what they’ve had to deal with over the last couple of days.”

In another post-match interview, Hodgson had described football like a drug, and despite his imminent departure, has not ruled out a return in the future.

He added: “I don’t have a drug that I’m contemplating replacing it [football] with, but as I’ve said, I’m stepping aside and I don’t know what the future will bring. But I’m not making the fanfare announcement that I’m retiring and you’ll never see me anywhere near football again. I prefer to leave avenues open, because who knows what the future will bring. I’m enthusiastic and energetic enough to go back into football in some capacity, and it’s a question of if I want to.

“Am I going to be able to wean myself off something that I have got some much pleasure from for the last 45 years? Selfishly, I’ve pursued it at the cost of all else, least of all my wife and sons.

“I’m hoping I’m going to be clever enough, sensible enough, intelligent enough to find other areas and other aspects of my life that I want to really follow and do something. But I would be lying if I said it’s going to be easy for me to forget all about football.”

Hodgson on Eze: No one knows what happened

The love I have received the past couple of days from my teammates, staff, fans and friends has been so powerful and I can’t tell you all how much it means to me. It’s not ideal but I trust Gods plan for my life. His will, not mine. ❤️ pic.twitter.com/5xB53jAsQB

Crystal Palace were dealt another blow before the game as Eberechi Eze picked up a serious Achillies injury that could rule him out until the new year.

Speaking about the training ground incident, Hodgson added: “No one knows [how it happened]. He received a short pass, he controlled the ball and went to turn with it and the next thing we know, he’s lying on the floor and in extreme pain. He felt something in his Achilles… That was confirmed by the MRI and now an operation has been planned for him.”