Middlesbrough condemn vile racist abuse of Yannick Bolasie after winger was called the n-word on social media and insist ‘we need to see demonstrable actions rather than gestures,’ with Bournemouth’s Arnaut Danjuma also getting called a terrorist

Middlesbrough have condemned the ‘vile and unacceptable’ racial abuse directed to Yannick Bolasie on social media on Wednesday.

Bolasie, on loan at the Sky Bet Championship club from Premier League Everton, revealed he had been called a ‘n*****’ on social media in a Twitter post on Wednesday.

In a statement, Boro said the abuse ‘demonstrates exactly why more has to be done to identify the perpetrators of such comments and bring them to justice.’ 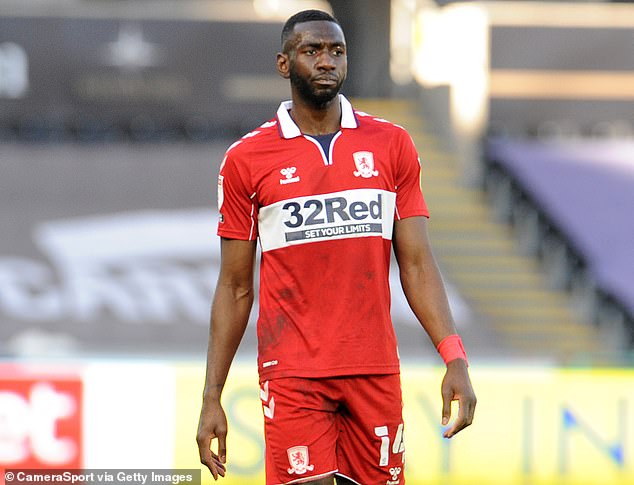 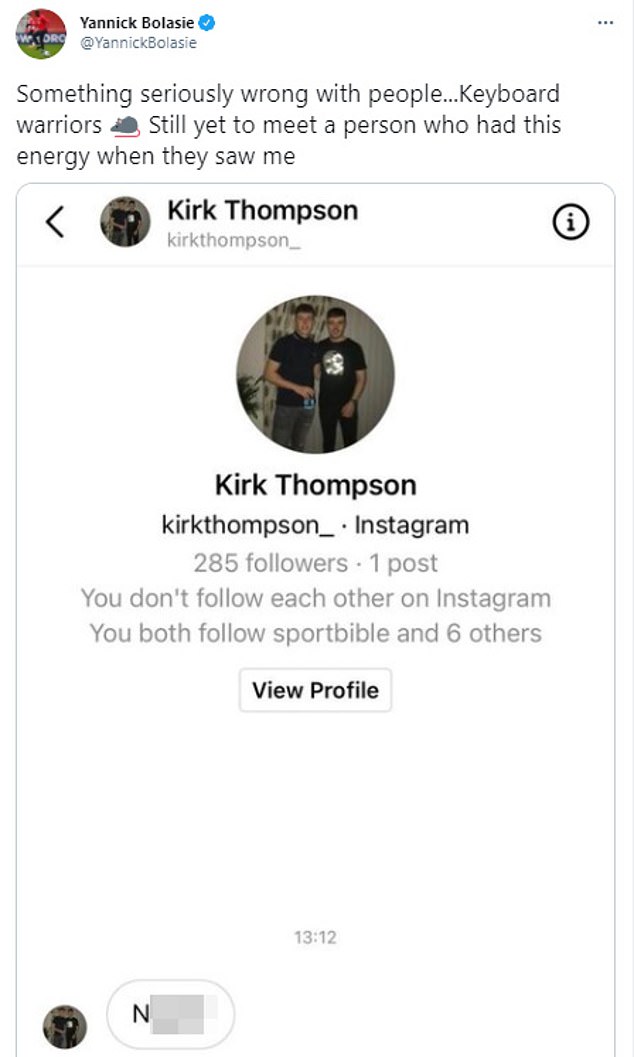 The club confirmed the matter has been reported to the relevant authorities, by both Bolasie and the club, with the 31-year-old receiving Middlesbrough’s full support.

The statement continued: ‘It is of great concern to the club that we are witnessing behaviour of this type and it cannot be allowed to continue.

‘As our players said when responding to the debate on taking the knee we now need to see demonstrable actions from those who have the power to implement them rather than further gestures. Actions must speak louder than words.

‘We repeat that we will not tolerate abuse of any form and any individuals who are identified to us will not only face the prospect of criminal charges but will also be banned from the Riverside Stadium.’

Instagram has confirmed that the account in question has been blocked from sending messages for a set period of time following an investigation, and that further violations will result in its removal.

Bolasie tweeted on Wednesday: ‘Something seriously wrong with people… Keyboard warriors. Still yet to meet a person who had this energy when they saw me.’ 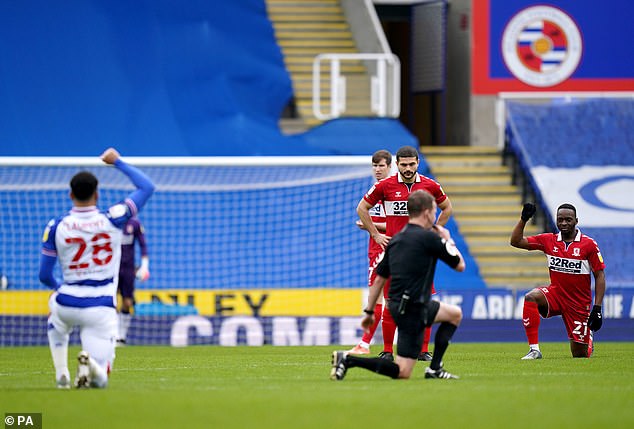 Middlesbrough, who have seen the majority of their players stop taking the knee before games, have urged football bosses to do more and show demonstrable actions’

Bolasie’s parent club also condemned the attack on their player, with a statement from Everton reading: ‘Everton has a zero-tolerance approach to any kind of racism or discrimination. There is no room for racism in football or society.

‘By working together, we can fight discrimination wherever it exists. Everybody has a part to play and social media abuse should never go unreported.

‘We also urge social media platforms to strengthen measures to prevent this kind of behaviour. Through challenging it and reporting it, we can all play a part in changing it.’

Democratic Republic of Congo international Bolasie joined Boro in January for the remainder of the season and has made four appearances for the club to date, the most recent of which was Saturday’s 2-1 defeat at Swansea.

Bournemouth forward Arnaut Danjuma also received racist abuse and was called a ‘terrorist’ on social media after an interview on Thursday in which he expressed his frustration at people calling taking a knee a waste of time.

Danjuma told Sky Sports: ‘I think fans who boo, they are not educated about it. They need to look into the history, what actually happened, and find out how we got to where we are today.’ 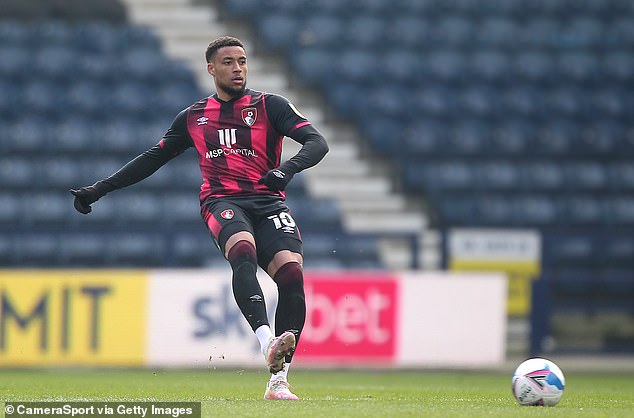 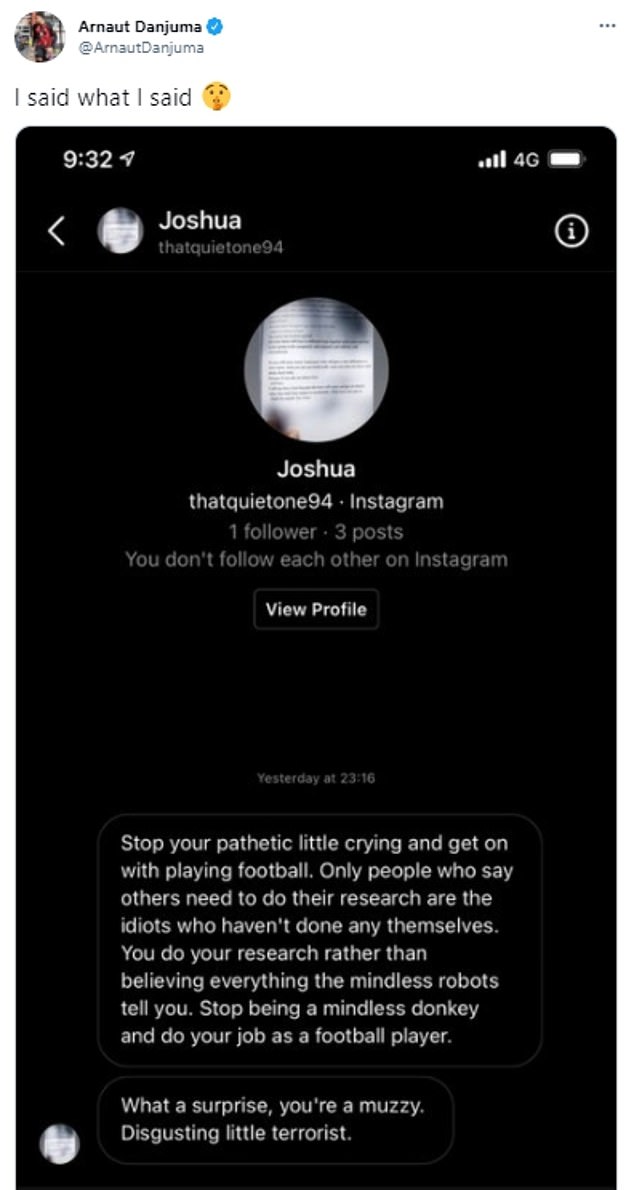 Along with a screenshot of the abuse he received, Danjuma wrote: ‘I said what I said’

He added: ‘It really frustrates me when people say (taking a knee is a waste of time)… it is a very important subject to speak about, and reach out to others about. Anyone who says that should educate themselves more’

Along with a screenshot of the abuse he received, Danjuma tweeted: ‘I said what I said.’

Bournemouth shared their support of their player, with a statement on Twitter reading: ‘The person in question has already deleted their account. This has to stop.

‘Thank you for speaking up and we stand with you, @ArnautDanjuma’

Osayi-Samuel, who played for QPR at the time, was racially abused in an Instagram post after their 1-1 draw with Norwich in December.

However, the Metropolitan Police said: ‘Police received a third party report of racial and abusive messages directed at a person via social media on 30 December 2020. The comments are believed to have been posted the previous day.

‘Officers made repeated attempts to contact the alleged victim with a view to taking a statement. However, he declined to support any police action and so the case has been closed.’