Report and highlights from the Sky Bet Championship clash between Middlesbrough and Huddersfield at the Riverside Stadium as Isaac Mbenza scored the opener for the Terriers, but Boro bounced back thanks to a Duncan Watmore and an Ashley Fletcher penalty.

Middlesbrough claimed their first home win since mid-December as first-half goals from Duncan Watmore and Ashley Fletcher secured a 2-1 comeback win over Huddersfield.

An Isaac Mbenza free-kick fired the visitors into an early lead, but a superb solo goal from Watmore and a penalty from Fletcher ensured Boro were ahead at the interval.

Paddy McNair’s late red card ensured Neil Warnock’s side endured a nervy finale, but the 10 men held on to close to within three points of the play-off positions.

Defeat for Huddersfield means they have now gone nine games without victory in all competitions and are in serious trouble towards the foot of the Sky Bet Championship table. 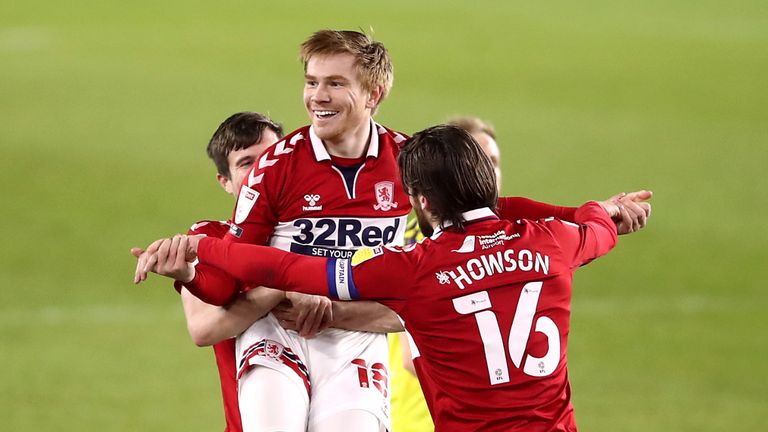 The Terriers have not won in 2021, but they were bright and incisive from the off and claimed a deserved lead after just nine minutes.

Marc Bola fouled Pipa close to the edge of the area, but there was still plenty to do as Mbenza stepped up to fire in the resulting free-kick.

The Belgian scored in Saturday’s home defeat to Wycombe and made it two goals in two games as he curled a superb strike over the Middlesbrough wall and into the left-hand corner.

Mbenza almost added a second four minutes later as he broke into the right-hand side of the box before dragging a low strike across the face of goal but – having started extremely sluggishly – Middlesbrough gradually got themselves back into the game.

Grant Hall should have done better when he directed a free header straight at Ryan Schofield midway through the first half, but the Teessiders levelled shortly after the half-hour mark thanks to some fine skill from Watmore.

The winger wriggled past Lewis O’Brien and Naby Sarr after cutting in from the right flank and opened up his body before curling a superb left-footed finish into the bottom corner.

Hall had a headed effort chalked out for offside as Middlesbrough began to dominate, but the hosts were not to be denied for long and claimed the lead from the penalty spot on the stroke of half-time.

Darnell Fisher got to Neeskens Kebano’s low cross ahead of O’Brien and was tripped by the Huddersfield full-back.

Fletcher, who was making his first start since September, stepped up and squeezed his spot-kick past Schofield’s right hand.

Whereas the first half was an action-packed affair, the second period was much cagier with Boro largely content to sit on their lead.

The away side enjoyed plenty of possession after the interval, although they struggled to carve out clear-cut chances against their opponents’ five-man defence.

They came close in the 74th minute, but while Kieran Phillips met Aaron Rowe’s cross with a glanced front-post header, the ball spun across the face of the Middlesbrough goal-line before it was hacked clear.

Fraizer Campbell sliced a shot wide as Huddersfield threatened again with 12 minutes left and Boro were forced to play the final nine minutes with 10 men after McNair was dismissed for a studs-up challenge on Juninho Bacuna.

Huddersfield almost made their man advantage count with one minute left, but while Phillips’ low shot beat Marcus Bettinelli, the ball rebounded to safety off the inside of the post as Middlesbrough sealed maximum points.