Michael Carrick the manager! Man United legend succeeds sacked Chris Wilder to become Middlesbrough’s new boss – as he makes his first permanent foray in the dugout after a caretaker spell at Old Trafford

Carrick, 41, had long been the favourite to take over from Chris Wilder following his sacking earlier this month and has been appointed to his first major role since leaving United last month.

The midfielder, himself a native of the north-east, first joined Middlesbrough as a nine-year-old. 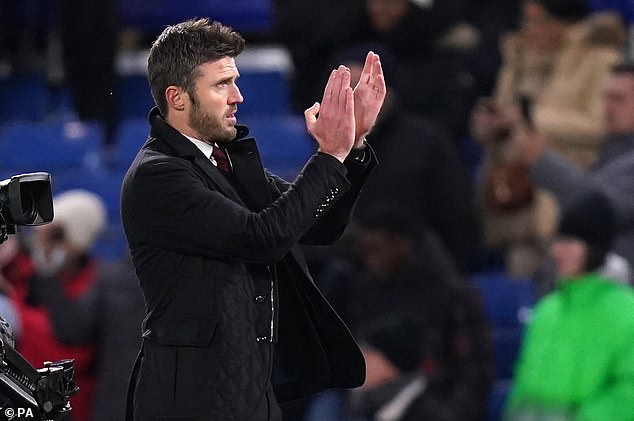 He arrives at the club with Middlesbrough struggling. They are 21st after 16 games, having only won four times.

Announcing the appointment across their social media channels, the club’s chairman, Steve Gibson, said that Carrick was the ‘outstanding’ candidate.

‘We’re delighted to welcome Michael to the club,’ said Gibson. We had identified a number of potentials for the vacancy who we spoke with, and were impressed by all, but Michael was the outstanding candidate.

‘Michael has the same values as the club, and we are very much aligned in our ambitions.

‘We see Michael as the perfect fit for us and he believes this is the right club at the right time.’

Meanwhile, Carrick, who formed a key part in some of United and Sir Alex Ferguson’s finest ever teams, winning everything there is to win in the club game, spoke of his excitement at being appointed to the role.

‘I’m really excited to be here and to be part of a club with such a deep history and tradition,’ he said. ‘Middlesbrough was the first professional club I played for as a nine-year old boy, so it’s a very special feeling to be back here as a head coach.

‘Growing up in the north-east myself I’m fully aware of what football means to people. It’s a real privilege for me to be in this position and to feel all the passion and enthusiasm you’ve got for the game and for Boro.

‘I’ll give everything to help develop the team and keep moving the club forward and make you the supporters proud. I can’t wait to get started.’

Middlesbrough have struggled this season and a poor run that included just two wins in their opening 11 games saw Wilder pay with his job. Having taken over at the club in November last year, he took them to seventh and it had been expected they would improve on that this term.

The club’s position does not necessarily spell doom, however, with the Championship proving to be extremely bunched at this stage of the season. Just eight points separate Middlesbrough in 21st and Millwall in sixth.