Paulo Fonseca will leave Roma at the end of the season, with former Chelsea and Juventus boss Maurizio Sarri favourite to replace him as manager.

Roma announced Fonseca’s planned departure on Tuesday, with the Portuguese set to leave the club at the end of the two-year deal he signed when arriving from Shakhtar Donetsk in 2019.

Sky in Italy report that the Serie A side are targeting Sarri as his replacement, although no talks have yet been held with the 62-year-old.

He has been out of work since being replaced at Juventus by Andrea Pirlo last summer, although he is still contracted to the team until June 30.

Sarri won the Serie A title during his single season in Turin, and also led Chelsea to Europa League victory in his sole campaign in England.

Fonseca’s exit comes after he failed to return Roma to the Champions League, which would have triggered an extension to his contract. 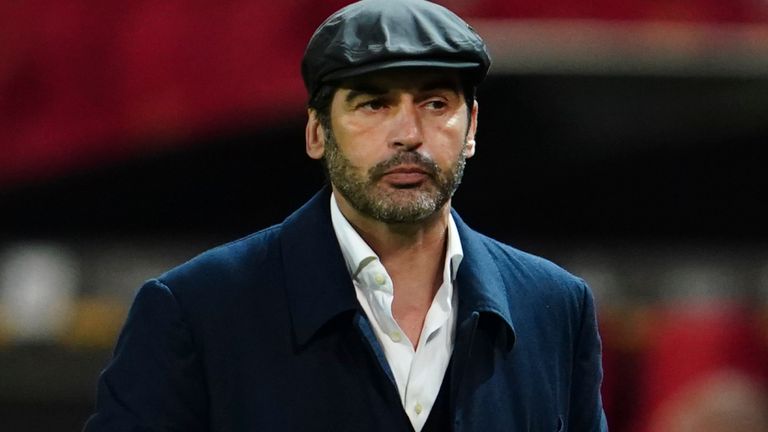 He took the club to fifth in Serie A last season, but they are seventh this campaign, nine points behind city rivals Lazio, who are sixth and have a game in hand.

Fonseca did lead Roma to this season’s Europa League semi-finals, but they were thrashed 6-2 by Manchester United in last week’s first leg.

The 48-year-old held talks on Monday with chairman Dan Friedkin and general manager Tiago Pinto following Sunday’s 2-0 loss at Sampdoria, after which it was decided that he would leave at the end of the season.

Fonseca told Roma’s website: “Over these last two years we have experienced a number of highs and lows, but I have always given my all for this club and this city – a city that has always been so welcoming.

“I would like to thank the Roma fans, everyone we have worked with at Trigoria, the players, and all those who have helped us during this journey – in particular Dan and Ryan Friedkin, for their continuous support since they arrived, and Tiago Pinto, an incredible professional, whom I wish the best as he continues his work for the club.

“We still have some very important games in front of us this season that we want to win, and we will continue to give our all in order to do so.”