Mauricio Pochettino has suggested there should be a UEFA investigation into claims made by his Paris Saint-Germain players that referee Bjorn Kuipers swore at them during their Champions League semi-final defeat to Manchester City.

PSG’s Leandro Paredes and Marco Verratti were allegedly verbally abused by Kuipers, who had angered the French side after sending off Angel Di Maria in the 69th minute for an off-the-ball stamp on Fernandinho.

Verratti made the claim in a post-match interview, while his team-mate Ander Herrera also spoke to reporters about Paredes. Sky Sports News has contacted UEFA for comment.

“We talk about respect towards referees,” Herrera told French media outlet RMC Sport, while revealing the expletive allegedly aimed at Paredes. “If we say that, we get a three or four-match ban.”

Pochettino later told his news conference he believed his players and suggested UEFA open an investigation into the matter. 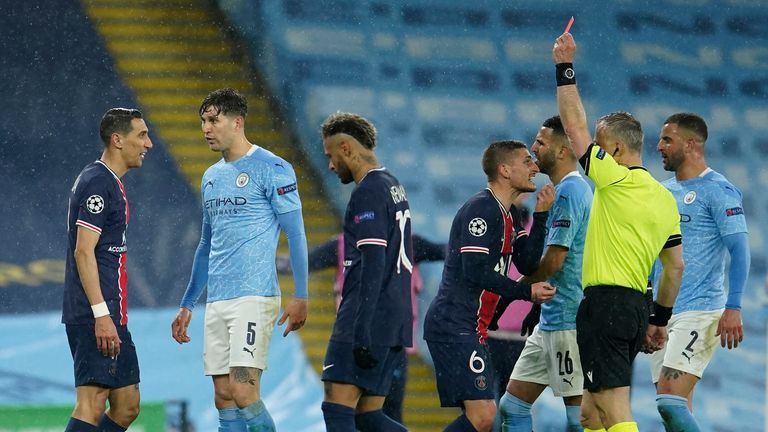 “Verratti explained to the TV in an interview,” Pochettino said. “We need to believe in what they are telling us.

“I didn’t hear nothing from the touchline. If something is there and it is how they explain, maybe UEFA will investigate the situation.

“That is not an excuse. The most important is that we’re not in the final, that is why we feel really sad.”

Riyad Mahrez scored goals in each half as the Premier League leaders beat French champions PSG 2-0 at the Etihad Stadium to complete a 4-1 aggregate success in their second Champions League semi-final.

It means Guardiola, who reaches the Champions League final for the first time since he won the competition with Barcelona in 2011, will now lead his side against either Chelsea or Real Madrid in the final in Istanbul on Saturday, May 29 as City bid to claim the major title missing from their trophy cabinet.

Before that, they have domestic matters to attend to and could add the Premier League title to the Carabao Cup they won last month with victory against Chelsea at the Etihad Stadium on Saturday, live on Sky Sports (kick-off 5.30pm), as they bid to complete a treble.

And speaking in his post-match press conference, Guardiola was full of praise for the achievements of his players in what has been an extremely tough season.

“We beat a team that knocked out Barcelona and Bayern Munich,” he said.

“We struggled early on but were much better in the second half. It was an incredible, huge victory for us.

“What the players have done this season is incredible in the toughest year for everyone. Being so close to winning the Premier League and in the final of the Champions League is so good.”