Tottenham have agreed a transfer fee for Wolves defender Matt Doherty, which is believed to be in the region of £15m.

The 28-year-old made 50 appearances for Wolves last season and has enhanced his reputation as both a reliable defender and significant threat going forward, scoring seven times in all competitions last term.

Spurs have already sold young right-back Kyle Walker-Peters to Southampton this summer and are also prepared to sell Serge Aurier for the right price. He has interest from AC Milan, Bayer Leverkusen and Monaco.

The 27-year-old Ivory Coast international has two years left on his Spurs contract having joined from Paris Saint-Germain in August 2017 for £23m. 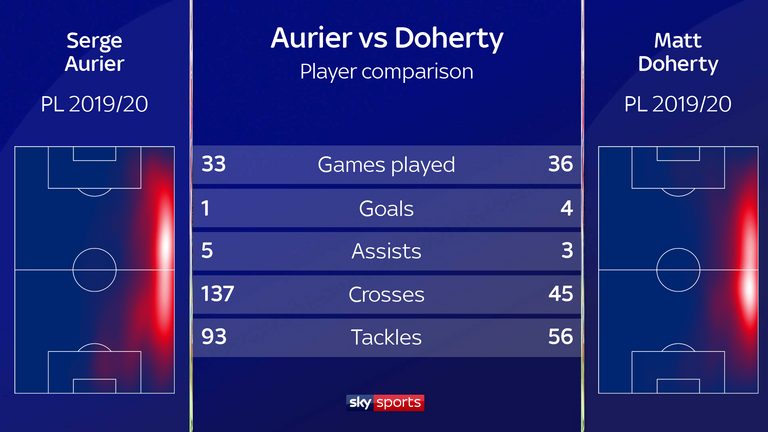 Wolves, meanwhile, remain in talks with Arsenal over a deal to sign Ainsley Maitland-Niles after having a £15m bid rejected.

Matt Doherty plays as a right wing-back for Wolves but he interprets that position in an unusual way.

He does not just hug the touchline and provide width but acts as a genuine penalty-box threat. Freeze the frame and he can appear to be Raul Jimenez’s strike partner at times. Doherty is reinventing the role. He is Wolves’ defender-turned-poacher extraordinaire.

Doherty’s off-the-ball movement and aerial ability in both boxes would appeal to Jose Mourinho. There are prettier players but few in his position who can impact the game quite so much. A move in this transfer window would solve a problem for Spurs – and create one for Wolves.

Read the full story on why Doherty’s role is unique