Manchester United have a fine line in teenage prodigies. The best part of two decades ago, Cristiano Ronaldo was one. Mason Greenwood was a toddler then. Now has joined a tradition that includes Duncan Edwards and George Best, Ryan Giggs and Marcus Rashford. While someone will have to make way in United’s forward line when Ronaldo rejoins, Greenwood is making a strong case that it should not be him, extending his goal-a-game start to the season to show he is their form forward now.

If it can feel United have limped into the history books, he has taken them there. An equaliser at Southampton was followed by a winner at Wolves. United are now unbeaten in 28 away Premier League games, taking the record from Arsenal’s Invincibles on a day when they looked all too beatable. That they left Molineux with three points owed something to Greenwood’s predatory streak, even if Wolves goalkeeper Jose Sa should have saved his low shot, but also to the finishing of their hosts.

United were unconvincing but triumphant, Wolves impressive but overcome. Bruno is proving the attacking antidote to Nuno and Bruno Lage’s team are entertaining anomalies, chalking up 57 shots this season without mustering a top-flight goal. They completed a hat-trick of defeats in controversial fashion, feeling Paul Pogba had fouled the excellent Ruben Neves seconds before Greenwood struck.

But his goal brought a debut assist for Raphael Varane. In a summer when United are recruiting Ronaldo to join Jadon Sancho, it felt unlikely that the centre-back would be the first to contribute to a goal. That he did completed an encouraging display for him, though United’s clean sheet also owed something to David de Gea and Wolves’ inability to find the net. 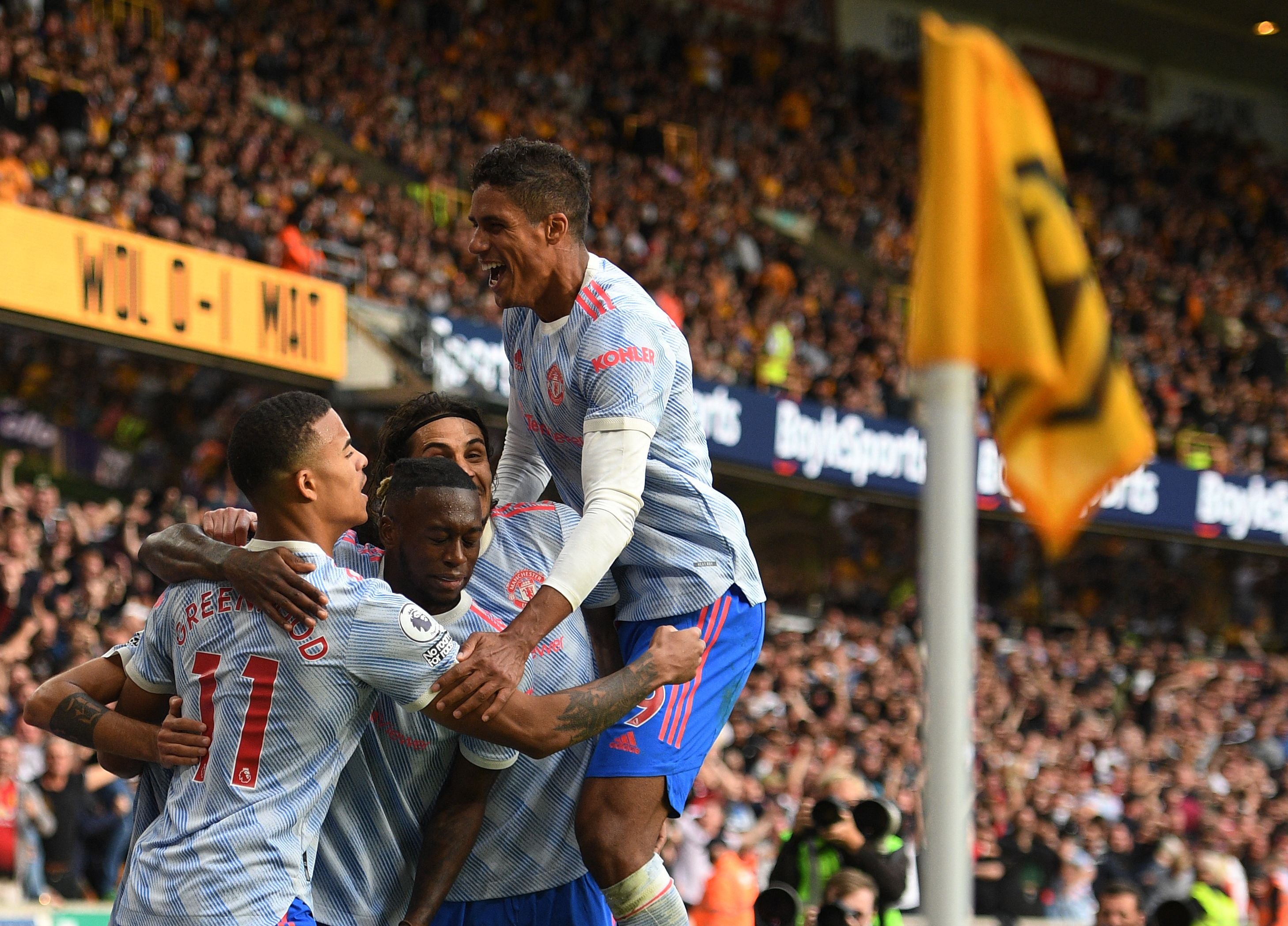 But Varane may feel he was afforded insufficient protection as United rode their luck. Ole Gunnar Solskjaer’s fondness for the safety blanket of dual defensive midfielders is well known. With Fred instead accompanied by Pogba, United appeared too open. First neither midfielder could stop Adama Traore when he was in full flight and De Gea was required to save well from Raul Jimenez. Then the ball cannoned off Fred, in rather embarrassing fashion, fell to Francisco Trincao and Aaron Wan-Bissaka made a magnificent goal-line clearance to keep his shot out.

The turbo-charged Traore kept on beating defenders, but Wolves kept on missing. Romain Saiss’ overhead kick dropped agonisingly wide, Trincao scuffed a shot wide from Traore’s pass. De Gea made a superb double-save from Saiss; the second, reacting swiftly when on the ground, may have cemented his place as first choice even when Dean Henderson is available.

Meanwhile, United’s finer movements tend to revolve around the Portuguese talisman they already have. Bruno Fernandes was sufficiently irritated to collect a caution for dissent but he also showed a catalytic streak. He finished emphatically from Pogba’s lovely wafted pass, but he was offside. He released Greenwood with a deft flick when the youngster almost scored. Solskjaer substituted the subdued Sancho and Dan James and shifted Greenwood to the right as he looked for a breakthrough. That United found one showed the difference a finisher can make. How Wolves could have done with one.