Borussia Monchengladbach forward Marcus Thuram has been banned for five games after he spat in the face of Hoffenheim defender Stefan Posch.

Thuram was sent off after spitting at Posch during a confrontation between the pair in Monchengladbach’s 2-1 defeat on Saturday.

The France international clashed off the ball with Posch and was dismissed after a VAR review upgraded his yellow card to red.

The German Football Association (DFB) say Thuram will serve a five-game ban immediately, with a sixth suspended until December 21 next year, and have handed the striker a fine of 40,000 euros (£36,600).

Thuram, 23, apologised on Saturday and said he would “accept all the consequences” of his actions. 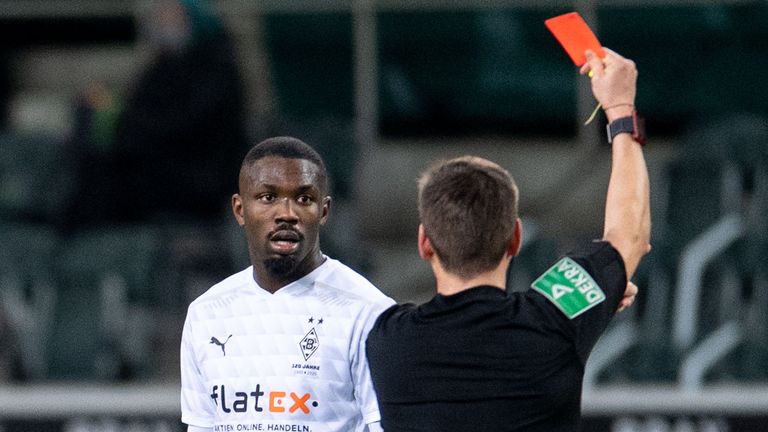 Writing on social media, Thuram said: “Today something took place that is not in my character and must never happen.

“I reacted to an opponent in a wrong way and something occurred accidentally and not intentionally.

“I apologize to everyone, to Stefan Posch, to my opponents, to my teammates, to my family and to all those who saw my reaction.

“Of course, I accept all the consequences of my gesture.”

Thuram’s ban is a major blow to Monchengladbach’s hopes of qualifying for the Champions League for a second consecutive season.

Saturday’s defeat to Hoffenheim left them eighth in the Bundesliga, six points outside the top four after 13 matches.