Everton’s Jordan Pickford looks shaky, Phil Foden is out injured and wantaway Harry Kane has been isolating… many of England’s Euro 2020 stars have come down to earth since Wembley heartbreak

And just like that football’s never-ending schedule swings back round to the Premier League season, the weekly grind where consistency is rewarded.

This summer galvanised England fans in tournament football, a penalty shootout all that separated them from a first major international trophy since 1966.

For Gareth Southgate’s stars it is back to the day job and for many it has been far from a seamless transition. 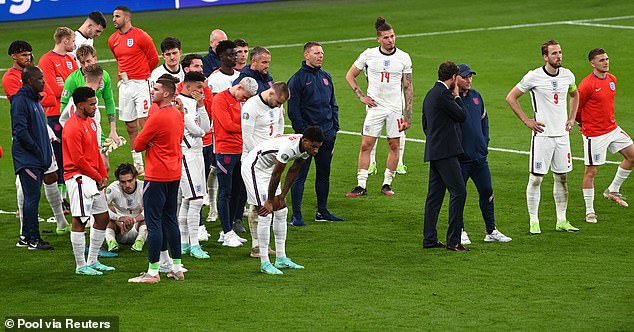 For every Luke Shaw, who slotted in seamlessly for Manchester United against Everton in the final round of pre-season fixtures at the weekend, there is Jordan Pickford.

England’s summer success ensured a number of the squad got lucrative summer moves with £50million Ben White and £100million Jack Grealish among the pick of the bunch.

Sportsmail takes a look at the Three Lions squad, how it has fared since losing to Italy and who needs to buck their ideas up with the new season a matter of days away.

HARRY KANE: Messy. Very messy. The England captain is in the middle of a huge fall-out with Tottenham as he looks to seal a £150m switch to Manchester City.

Following an extended post-Euros break to the Bahamas and Florida, which prevented Kane reporting as expected last week, the 28-year-old is now in quarantine — but is available for the first game against, ironically, City.

Kane has been isolating at the Spurs Lodge hotel facility and training alone since Saturday and had to release a statement to rubbish reports he deliberately returned later than team-mates to training.

He claimed in a social media post last Friday that the club always knew when he was arriving back. 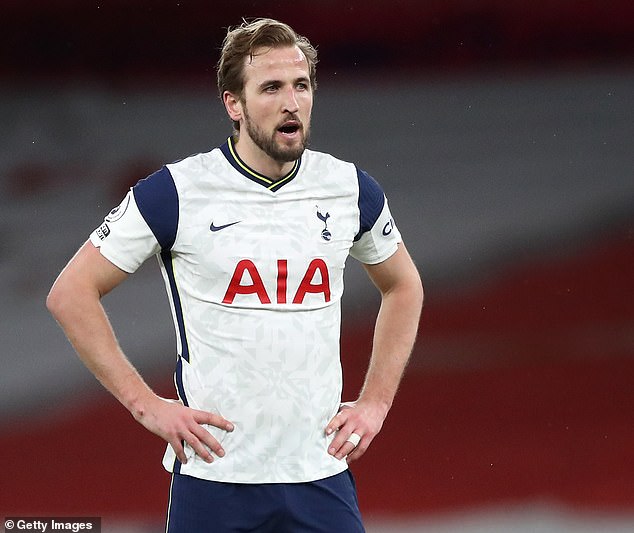 All other international players had reported back on August 2 but no other Spurs player had played through to the Euro 2020 final, as Kane did, which was only four weeks ago and which is why Kane understood his return date was delayed.

‘It hurts to read some of the comments that have been made this week, questioning my professionalism,’ said Kane.

‘While I won’t go into the specifics of the situation, I want to clarify that I would never, and have never, refused to train. I will be returning to the club tomorrow (Saturday), as planned.

‘I wouldn’t do anything to jeopardise the relationship I have with the fans who’ve given me such unwavering support.’

Kane is expected to make his return to group training on Friday, just two days before Spurs’ season kicks off, pending a negative PCR coronavirus test following his arrival from an amber list destination.

The ball is firmly in Man City’s court as to how high their offer will go. But, nonetheless, Tottenham remain deeply upset at how Kane and his brother, Charlie, have set about trying to extract himself from the club. 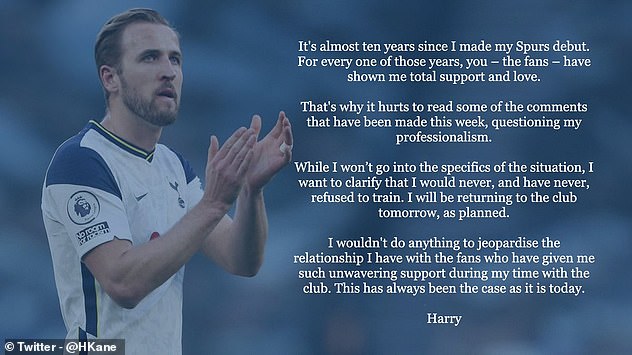 PHIL FODEN: It was injury that cost Foden any involvement in that Wembley final against Italy – and he is still yet to recover.

The 21-year-old’s foot injury remains problematic and it appears he is still getting to grips with the issue.

The Telegraph report that Foden is expected to be out of action until after next month’s international break – ruling him out of City’s first three league games.

Foden is said to have flexed his foot during a training session with England in the build-up to the Italy final, which the Three Lions lost on penalties.

City’s medical staff, according to the report, viewed the injury as ‘unusual’ and are keen to err on the side of caution in bringing him back into the side.

With Kevin De Bruyne already out, the early part of the season was a chance for Foden to further stamp his authority on this side, only for injury to rob him of the chance to do so. 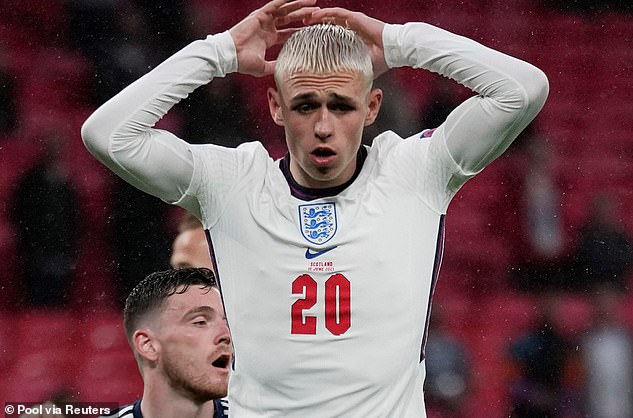 JORDAN PICKFORD: Talk about crashing back down to earth.

While Kane and Foden’s issues have been unavailability, Pickford got his first outing under new boss Rafa Benitez and he will hope the Spaniard is not too fussed on first impressions after his early mistake at Old Trafford.

The England No 1, who was superb throughout Euro 2020, allowed Lucas Digne’s headed backwards pass to bounce off his body and into the path of Mason Greenwood who gleefully fired United ahead.

A few minutes later, Pickford spilled a tame Bruno Fernandes effort and was relieved Anthony Martial couldn’t get onto the rebound but the respite didn’t last long. It was a thorough examination and not one the ex-Sunderland goalkeeper will have enjoyed all that much.

And just like that the discourse returns around Pickford, a player people were questioning as England’s No 1 before he backed up his selection and then some during the summer tournament. 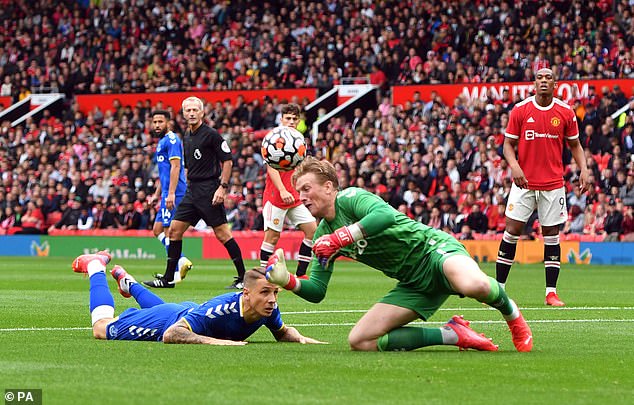 THOSE WITH REASON TO SMILE…

BEN WHITE: Perhaps a tad fortunate to even earn a spot in Southgate’s England squad but that should change now after he sealed a £50m switch to Arsenal from Brighton.

White made his first start for the Gunners against bitter rivals Tottenham on Sunday and while Mikel Arteta’s side fell to a 1-0 defeat, White impressed.

Arteta described his centre back’s display as ‘really good’ and the challenge now is for White to make himself an undisputed starter for club and country.

He’s developed at Leeds and Brighton and now he’s been handed the chance to kick on to the next level. A big season ahead for the 23-year-old.

JADON SANCHO: Another who, perhaps more surprisingly, saw limited minutes at the Euros, Sancho is back in England and has the chance to make his mark at Manchester United.

The ex-Man City academy star attended his first training session on Monday at United after completing his £73m switch from Borussia Dortmund earlier this summer. 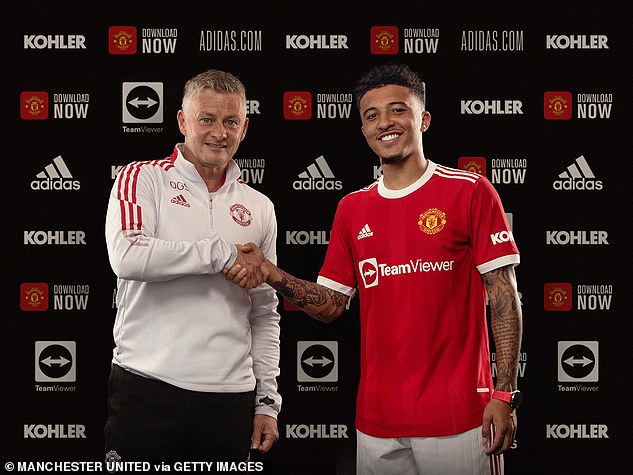 The 21-year-old established himself as one of Europe’s most exciting wingers after moving to Germany and now back in England he will look to light up the Premier League down United’s right flank.

Sancho’s switch is good news for England too given he will link up with Shaw and Harry Maguire, as well as young goalkeeper Dean Henderson, who is pushing for the No 1 jersey.

Whether he is ready for the season opener against Leeds remains to be seen but Sancho has the world at his feet and has all the attributes to carry over his form from Dortmund.

JACK GREALISH: So, no Kevin De Bruyne and no Foden, for Man City to kickstart their title defence… enter Jack Grealish.

Grealish was one of the standout performers for England this summer and his £100m switch to the Etihad Stadium is expected to allow him to add Champions League football and the game’s biggest trophies to his CV.

Don’t read too much into his cameo in the Community Shield, Grealish will be pushing for a start against Tottenham in the opener and with the quality around him he will expect to hit even greater heights than he managed as the lynchpin of Aston Villa’s team.

His British record move will carry plenty of pressure and expectation but Grealish seems to shine under the brightest of lights and so City are unlikely to be too concerned of him shrinking.

More of the same this time round and that £100m may seem a bargain.

STILL TO MAKE THEIR MARK…

Quite a few, actually.

Many of England’s Euro 2020 heroes are still to get a taste of club action again following extended holidays.

The likes of Ben Chilwell and Reece James have yet to get a run out for Chelsea while Mason Mount was restricted to a cameo role off the bench in the Super Cup victory against Villarreal.

Manchester City will be counting their lucky stars that as injuries pile-up their Three Lions contingent of Kyle Walker, John Stones and Raheem Sterling are back in training and pushing to be involved for the season opener against Tottenham.

All three sat out the Community Shield, which was won from the penalty spot late on by Leicester.

Manchester United’s Marcus Rashford has been under the knife for surgery and is facing a longer spell on the sidelines. 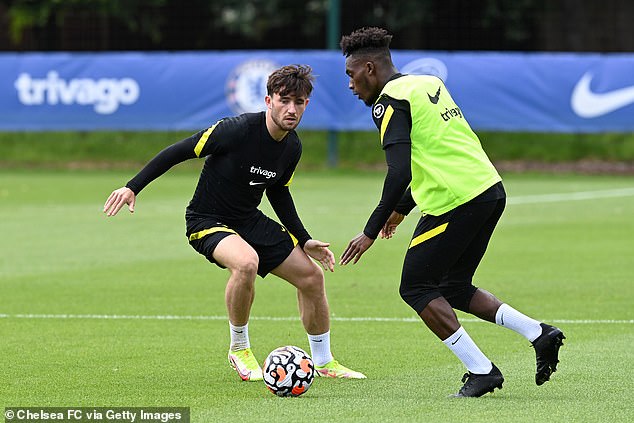