Manchester United latest LIVE: Ole Gunnar Solskjaer is clinging onto his job after the humiliating defeat at Watford… with chiefs discussing when to get rid and Zinedine Zidane in the frame to take over at Old Trafford

Manchester United chiefs are locked in talks over whether to sack Ole Gunnar Solskjaer in the wake of their embarrassing 4-1 defeat at Watford on Saturday.

The Norwegian, who will reportedly get a £7.5million pay-out if he is ousted, would leave the club in seventh and 12 points off Premier League leaders Chelsea.

Zinedine Zidane is the favourite to take over if the club can convince him to join, while Brendan Rodgers is another of the names in the frame.

Defeat to Watford has pushed Ole Gunnar Solskjaer to the brink at Manchester United and the boos rang out from the away end following a 4-1 humiliation at the hands of Claudio Ranieri’s side.

Losing 5-0 to Liverpool was galling, losing so convincingly at Old Trafford to Manchester City was another but losing at Watford, who had not picked up a win since Ranieri took charge – until today – was something else.

United fan and writer Scott Patterson, of the Republik of Mancunia website, gives an insight into the mood of the fanbase after this latest humiliation and why there is no way back for Solskjaer…

Solskjaer arrived at United’s Carrington training base in his Range Rover at around 9am this morning. United’s executive vice-chairman Ed Woodward is also on site.

Sacking Solskjaer won’t come cheap for United with the Norwegian due a compensation payment of £7.5million if the axe falls.

Reports claim Solskjaer would be entitled to a full year’s salary and he is the fifth-best paid manager in the Premier League behind Pep Guardiola, Jurgen Klopp, Brendan Rodgers and Marcelo Bielsa.

– Man United chiefs held an emergency board meeting online after the 4-1 defeat at Watford on Saturday afternoon
– It’s the clearest sign yet that the manager will be sacked imminently following a torrid run of results in the Premier League
– Former United midfielder Darren Fletcher, who is technical director at Old Trafford, would take over for the upcoming games with Villarreal and Chelsea or until a permanent successor could be found
– Zinedine Zidane, the former Real Madrid boss, and Leicester’s Brendan Rodgers top the club’s wishlist

It now seems a matter of when rather than if Ole Gunnar Solskjaer is sacked by Manchester United.

Saturday’s humiliating 4-1 defeat at Watford led to a crisis meeting involving Old Trafford chiefs last night and it now appears to be simply a matter of timing.

It means the Norwegian, who would reportedly receive a severance payment of £7.5million if he is sacked, will leave after almost three years in the job and with United languishing seventh in the Premier League – some 12 points behind leaders Chelsea.

The latest debacle against Watford followed defeats to Aston Villa, Leicester City, Liverpool and Manchester City in recent weeks that pushed Solskjaer to the brink.

The travelling fans at Vicarage Road turned on the club legend as he held his hands up in apology after a loss in which captain Harry Maguire was sent off.

Sportsmail will bring you all the latest on Solskjaer throughout Sunday plus all the comment and reaction on a fast-moving situation. 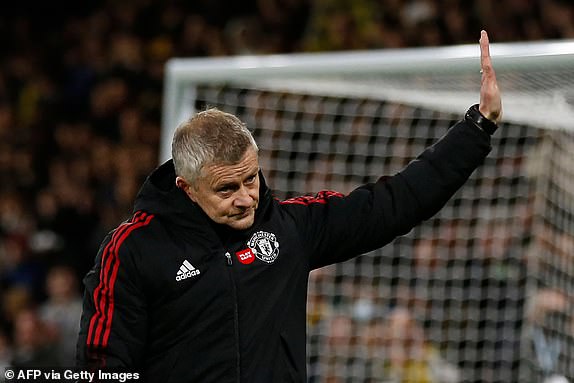