Manchester United star Bruno Fernandes has insisted he and Anthony Martial didn’t plan out the Frenchman’s goal against Manchester City. Many thought the routine between the two was practiced given how well it came off. But the Portugal international has insisted that wasn’t the case.

Manchester United beat Manchester City 2-0 in March, with Martial and Scott McTominay both finding the net.

Many thought the routine for the Frenchman’s goal had been rehearsed before the match – but Fernandes has now insisted that wasn’t the case.

Speaking to the club’s official website, the 25-year-old said: “It was not a plan.

“Against Everton, it was my bad ball, [which] was not really good. I needed to put the ball more inside of the box, more in the direction of the goal.

“So it was one of those things: when you are in the pitch, you know your team-mates when you look at them. It’s like a pass.

“You look at him, and you feel something. You feel, [and] it goes. So in the free-kick, I start talking with Fred, because normally we talk [about who’ll take]. 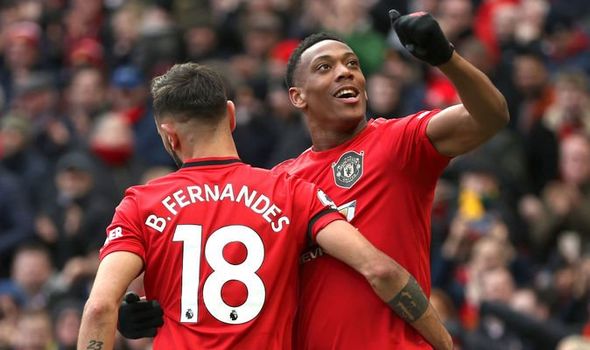 “There were eight in the area and the left foot [delivery] was better for us, for attacking the ball.

“I started talking, and I already saw Anthony look at me. He looks at me, I look at him, I feel he wants the same as me. So you go off feelings, you know? Maybe I will put the ball in sometimes and Anto doesn’t go.

“In that moment, I talked with Fred, and I talked like: ‘Okay, Fred, you go.’ So if someone of Manchester City listens [they think] I’ve told Fred to go and they can relax.

“For example, in the wall was [Sergio] Aguero, on the other side [Ilkay] Gundogan I think. Maybe when they saw Fred going back and me on the ball, they think: okay, Fred goes [to take the kick].

“And they relax a bit. I started to look at the edge [of the area] and [motioned] ‘Go second post, go second post. In the moment that the referee whistled, I feel Anto is just ready and think: ‘I go now.’

“And you need to try, you need to improve. Maybe the next one I do like that the defender takes the ball and goes to counter, and it’s a difficult situation for us because our defenders are up in the area for the cross. 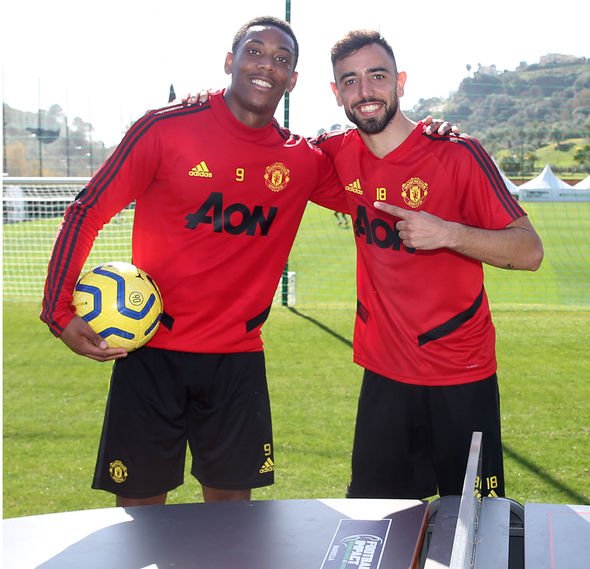 “So you need to take some risks in the game, because the game is risk. If you don’t risk, normally… If you saw most parts of the games, when you take a goal, it’s from a mistake.

“It doesn’t matter if the mistake was from two minutes ago, or not – it was a mistake, because you lose the ball. Normally, you lose the ball, or you do a foul and a free-kick, or a penalty. It’s always a mistake. A mistake is not always your fault, no.

“Mistakes happen in football, it’s normal. Every game you have a lot of mistakes from everyone. So we, Manchester United need to improve, to try.

“You need to feel that positive energy, because I know also – if I try this ball – Anto knows this is a difficult ball. ‘I need to give my best.’ So he will shoot the best way he can. You just need to keep improving, and keep trying.”

Fernandes then admitted he hopes to win trophies at United, adding: “Two targets, no! Four. I want four, because we have league, Champions League, Carabao and FA Cup.

“I came to Manchester to win, to win titles, league, Champions League, everything. We know the potential Manchester have, because we are a young team, young players, but we’ve a lot of quality.

“Doesn’t matter if we’re young and the others have more experience than us because we have also experienced players who can help the youngest. The mix we have now and in the future, I don’t know what will happen in the next season, of course Manchester is a big club and normally they buy someone because you are a big club and everyone wants to come here.

“It’s easy for Manchester and I hope to build a big team, you know? We already have a big team, but whoever comes needs to come to win. Just to focus to win, I want people hungry for titles and everything.

“I feel this now in the group, everyone wants to win. For example, Juan Mata. He’s won, if not everything, then most things, and I feel on him he wants more. He wants more.

“When you feel this from players like Juan who won the World Cup, the Euros, the Champions League – if I’m not mistaken – a lot of things you know. When you feel he wants more, you want more also. It’s good for you.”