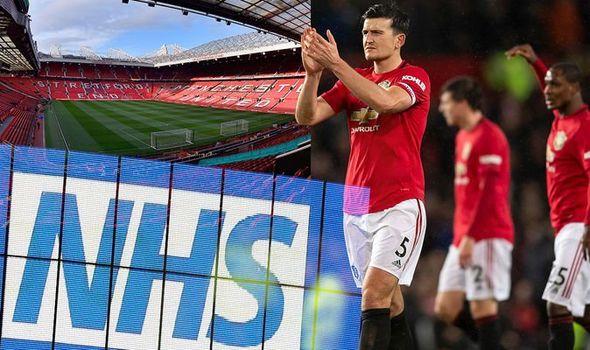 Manchester United players will give 30 per cent of their wages to the NHS in order to help the fight against the coronavirus for one month. Premier League clubs have come under fire, with Matt Hancock urging them to do their bit. And the Red Devils have now responded, with players agreeing to give up 30 per cent of their salary in a charitable donation in order to help hospital and health centres throughout Manchester.

Captain Harry Maguire was approached by Ed Woodward about the idea, with the centre-back then talking it over with the rest of the squad.

And, in a major boost to the strained NHS, players were overwhelmingly in agreement about making a donation.

United want to be seen leading the way in the fight against the coronavirus and their gesture will see millions injected into the crisis that has hit Britain hard.

The PFA (Professional Footballers Association) recently declared that players would not be accepting pay cuts.

But United’s own squad have decided to go ahead and donate millions anyway, determined to see the crisis end as early as possible and to ensure emergency services are well-protected at this difficult time.

United currently spend the most when it comes to players’ wages, forking out a huge £332million every year.

That has grown by more than £100m – a big 43 per cent – in the past three years and the Red Devils have now decided to give something back.

David De Gea is the club’s highest-earner, with the Spain international taking home £375,000 each week after signing a new contract back in September.

And the likes of Marcus Rashford and Anthony Martial earn more than £200,000 a week each.

We’ll be bringing you the very latest updates, pictures and video on this breaking news story.
For the latest news and breaking news visit: express.co.uk/sport/football
Stay up to date with all the big headlines, pictures, analysis, opinion and video on the stories that matter to you.
Follow us on Twitter @DExpress_Sport – the official Daily Express & Express.co.uk Twitter account – providing real news in real time.
We’re also on Facebook @DailyExpressSport – offering your must-see news, features, videos and pictures throughout the day to like, comment and share from the Daily Express, Sunday Express and Express.co.uk.