Manchester United legend Peter Schmeichel believes Ole Gunnar Solskjaer must stick with David De Gea next season. De Gea has come under pressure for his position following a string of mistakes for United this season. The Red Devils have Dean Henderson out on loan at Sheffield United who has excelled in his first campaign in the Premier League.

Henderson is now set to return to Old Trafford ahead of the start of next season.

But Schmeichel believes the hype around Henderson is largely because he is English and says the criticism of De Gea has been unfair.

The pundit can still see De Gea being United’s first-choice goalkeeper for a number of years.

“Richard [Keys] you’ve been working in the media for so long, you know precisely what this is all about,” Schmeichel said on beIN SPORTS.

JUST IN: Kai Havertz has contacted two Chelsea players ahead of expected move 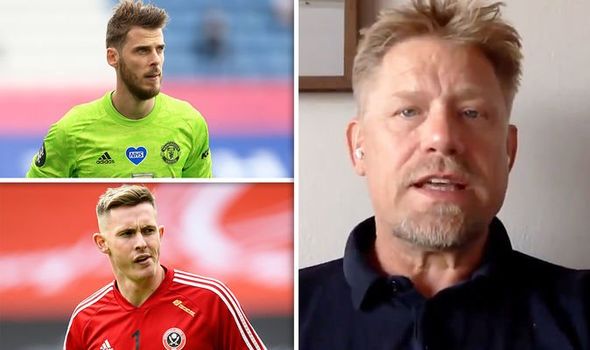 “[But] De Gea’s one of the best goalkeepers in the Premier League for the last I don’t know how many years.

“One of the things I believe is that the way Ole’s changed the way the team plays hasn’t fitted in with the way that De Gea has played in the last couple of years and so he would have had to make changes to his game.

“They’ve now got third place, they’ve got the Europa League to focus on now, he comes back with a couple of weeks break, comes back to a new season, he’ll be alright.

“I see David de Gea as the goalkeeper for Manchester United for many years to come and I think he has been treated unfairly in all honesty.”

“You say [I’ve been] outspoken, I’ve never been a big fan of his, it’s as simple as that,” Keane said on Sky Sports.

“He makes far too many mistakes and big mistakes that cost United points.

“So we talk about recruitment, it’s obviously a difficult part of the game, but that’s just my opinion.

“I think if United want to get back challenging for league titles then they need a better goalkeeper.”