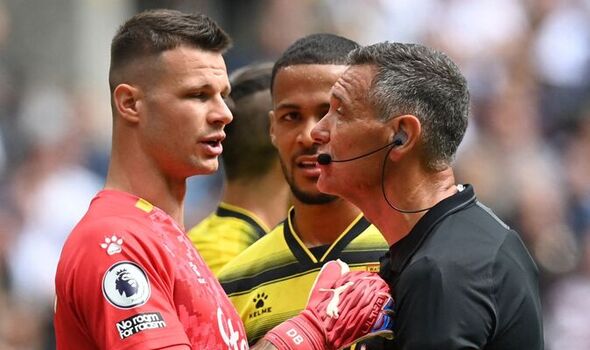 Manchester United have begun formal talks with Watford over a surprise deal to sign Austria international goalkeeper Daniel Bachmann, according to reports. The Hornets shot stopper, who had been battling Ben Foster for the No 1 shirt at Vicarage Road last season, looks in line for a shock move to Old Trafford where he could provide healthy competition for David de Gea.

Despite weeks of negotiations with Barcelona for Frenkie de Jong, Bachmann could well become the first signing of the new era under Erik ten Hag.

The Dutchman is keen for the club to ramp up their recruitment drive and finding a replacement for Dean Henderson is top of the agenda ahead of his proposed loan move to Nottingham Forest.

Fabrizio Romano confirmed the developments on his Twitter account. He said: Manchester United are in talks with Watford to sign Daniel Bachmann as 2/3 goalkeeper. Watford will only consider a permanent deal.

“Bachmann, among options for Man United to replace Dean Henderson who’s one step away from joining Nottingham Forest as revealed last week.”

Bachmann hinted towards the end of May that a summer deal could potentially be on the cards but still, it would be a signing that not many saw coming.

He told Austrian newspaper Krone at the end of May: “There was contact, it wasn’t out of thin air.

“I don’t know if the team boss [Rangnick] has a say in the transfers. Hey, it’s Manchester United, a huge honour if a club like that is interested in you.”

Despite his departure, Ralf Rangnick’s fingerprints are all over the deal following his appointment as manager of the Austria national team.

He is understood to have recommended the signing of Bachmann to United towards the end of his reign as interim boss, before he briefly moved upstairs into a consultancy role.