Manchester United and Manchester City not pursuing a deal for Chelsea transfer target Kai Havertz is “weird”, according to European football expert Gabriele Marcotti. Bayer Leverkusen forward Havertz is reportedly desperate for a move to Chelsea this summer. Personal terms are said to be agreed but the Blues are yet to match Leverkusen’s asking price for the 21-year-old.

Attacking midfielder Havertz had a fine season for Leverkusen, scoring 12 goals and contributing six assists in his 30 Bundesliga appearances.

And Marcotti admits he is confused as to why the likes of United and City are not interested in the Germany international as well.

“Do you know what’s really weird to me?” Marcotti said on the Gab and Juls podcast.

“City, United both have a lot of money, both could use strengthening in that area – those names haven’t been mentioned at all. They haven’t been linked one bit. 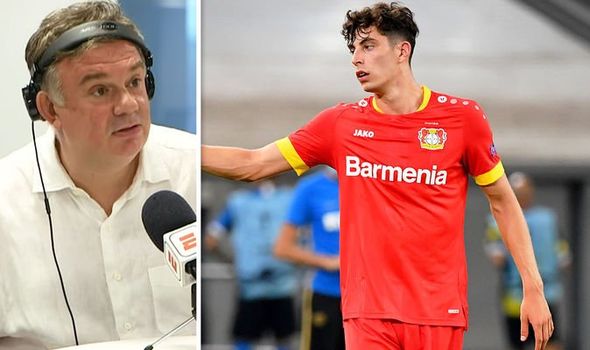 “Also, Bayern Munich, if Thiago goes all of a sudden you’re going to have money and flexibility.

“They were strongly linked with him a year ago. An odd story.”

Earlier this week, Marcotti claimed Chelsea would only agree a deal for Havertz at a price that suits them.

“This idea that personal terms have been agreed, that’s been out there for a while,” Marcotti told ESPN FC.

“I stick to what I’ve said before that Chelsea I think will only sign Havertz if they can get him at a price that they really, really like.

“There are suggestions that Leverkusen have put a deadline on this, at the end of August which of course is just around the corner.

“But again, if you’re Chelsea, why would you be pushed into observing any kind of deadline?

“If you show up later with money and the guy still wants to come and you’ve got a deal in place with him, it’s not like he’s not going to come.”

“To me, and this is just a gut feeling, this is Havertz’s people and Leverkusen trying to hurry this thing along and Chelsea saying ‘let’s take our time with this and if we do this we get it on our terms’ and I don’t think it’s going to be €20m a year as it has been reported in Germany.”