Manchester City are the masters of illusion. They can sign up for the European Super League but then withdraw early enough to recast themselves as reluctant participants who only joined for fear of being left behind.

On the pitch they have that knack of disguising reality, too. At Selhurst Park they created a mirage of a competitive Premier League – at least in the first half. Pep Guardiola made eight changes to the side that beat Paris Saint-Germain 2-1 in Paris on Wednesday. His second team – which included Raheem Sterling, Sergio Aguero, Gabriel Jesus and Ferran Torres – made hard work of proceedings in the opening period. Crystal Palace had the better chances. The champions-in-waiting were challenged. It was possible for observers to fool themselves. This was a contest.

Unlike against Chelsea earlier in the month when Roy Hodgson’s team were blown away in the first ten minutes, Palace showed some ambition. Three times in the first 45 minutes Christian Benteke had opportunities to score. First he muffed a header after a fine cross from Andros Townsend and then he shot straight at Ederson from distance.

Townsend enjoyed himself in the space left behind Benjamin Mendy and the winger played in Joel Ward, who drove into the area. The full back’s cross ricocheted around the box and fell to Benteke, whose close-range shot was blocked by Ederson.

City, with Aguero, Sterling, Jesus and Torres switching positions across the front line, created a number of half-chances. Sterling chased a long ball into the area and emerged with possession on the edge of the six-yard box after the defence let it bounce twice. Tyrick Mitchell’s last gasp challenge blocked the shot. Jesus had the ball in the net but his neat volley from Fernandinho’s cross was ruled out for offside. City were far from their best and the game was less than thrilling but the consolation was that it was competitive.

Of course it was an illusion.

Guardiola was effectively playing the reserves – a second-string squad that are in a different league to Palace. Their class was eventually going to show. The home side had a warning when Scott Dann was forced to head over his own bar when Torres tried to dink a cross to Jesus. The reprieve did not last long. Three minutes later City imposed themselves.

Mendy fired in a cross from the left and Aguero, showing exquisite control, took one touch to tee himself up and another to score. The previous 57 minutes proved meaningless. Reality hit hard in south London.

It took just 83 seconds for City to double their lead. Torres picked up a loose ball on the edge of the box and coolly curled it into the corner past Vicente Guaita. It almost looked casual. 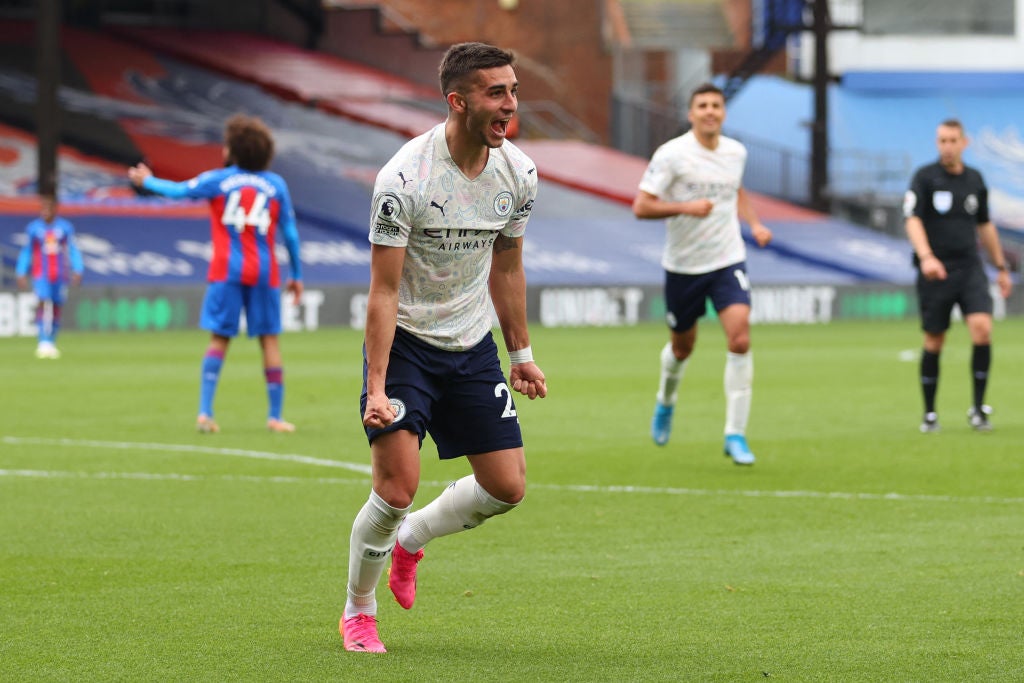 Palace were in trouble. Sterling hit the post from a narrow angle and Benteke made a remarkable block from Aymeric Laporte when it seemed the Frenchman was certain to score. Hodgson’s team battled but City cut through them with ease. The pace and power of the visiting side’s attacks exposed the gulf in class.

This was a living incarnation of a superclub’s dream: a quality XI for domestic consumption that can be replaced almost wholesale with even better players for the Champions League – or whatever competition comes along next.

It was a glimpse of the two-tier future envisioned by the architects of the Super League and, whether they want to admit it or not, the strategists at the Etihad. And it was never really a contest.

City can now become champions tomorrow. They would take extra pleasure because for that to happen, Liverpool need to beat Manchester United at Old Trafford, a scenario that would inflict pain on both of City’s main rivals. There should be no sympathy for the traditional north-west powerhouses, though. They want to do exactly what City are doing.  They wish they had Abu Dhabi’s money and are equally keen to treat the likes of Palace as second-class citizens.

Whatever team they play, City are the best in Europe, if not the world. They will be back to full strength against PSG on Tuesday. Enjoy them. Embrace the illusion. The reality is a game changing beyond recognition in front of our eyes.