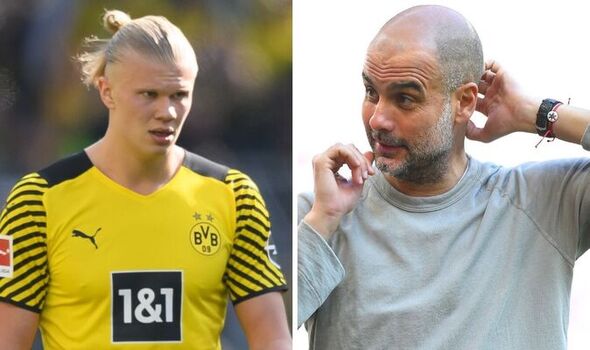 Manchester City are edging closer to agreeing a blockbuster move to sign Borussia Dortmund superstar Erling Haaland, but there are reportedly still several details to sort out before any deal is finalised. When Haaland originally joined Dortmund back in January 2020, the £63million release clause in his contract was noted by clubs all over Europe.

That buyout fee is now active this summer and a host of European clubs have been lining up to prise Haaland away from Signal Iduna Park. Real Madrid and Barcelona had originally been the frontrunners for his signature, but it appears as though Haaland will now be heading to the Premier League.

Reports emerged on Monday night that City had made a breakthrough in talks with Haaland and his representatives. And The Athletic now claim the striker has ‘given the green light’ to join Pep Guardiola’s squad this summer.

However, the same report adds that any deal is far from being finalised with three details still to be agreed. City have not yet agreed on their payment to Dortmund while the Premier League leaders will also need to finalise commission to Haaland’s representatives.

It’s been suggested that Haaland will sign a deal worth £500,000-a-week, but the final details of his contract are also not finalised. City have declined to comment on the speculation over Haaland’s future and Guardiola was equally less forthcoming when asked about the rumours in his press conference on Tuesday.