Manchester City officials have held talks over the possibility of signing Barcelona superstar Lionel Messi, according to transfer expert Ian McGarry. City are the favourites to sign Messi following Tuesday’s bombshell news that the 33-year-old wants to leave Barcelona. City have long been linked with a move for the Argentina star, with club chiefs previously stating their wish to sign him.

And McGarry claims City’s interest has gone as far as holding conversations regarding contract details for Messi.

City officials have also discussed where Messi would play and what would happen if his former Barca boss Pep Guardiola left the club in a year’s time.

McGarry said on the Transfer Window podcast: “Having had conversations with people close to this particular situation, it’s our information that an intermediary, and it’s not the case that this intermediary necessarily represents Leo Messi or his interests, has had conversation with Manchester City officials regarding what the possibility of moving to the Etihad would be for the Argentine captain.

“And in doing so, they have discussed salary details, contract details, and how things would work out with regards to of course his rather strained, in the end, relationship with Pep Guardiola [at Barca], the current coach, who’s out of contract a year from now, and what kind of situation City would see Messi being in with regards to how long he would be at the club, what his position would be, and indeed how he would fit in with regards to Guardiola in the first instance, but also post-Guardiola.

JUST IN: Man Utd can exact Gabriel revenge on Arsenal after enquiring about Arteta target 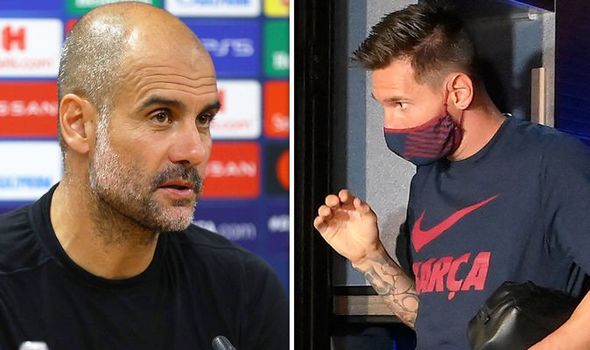 “This is the transfer that City have publicly admitted they would have loved to have done in the past.”

Meanwhile, former Arsenal midfielder Stewart Robson believes City is the most realistic option for Messi if he were to leave Barca this summer.

“He’ll probably play him slightly off the front, maybe slightly wider with players in front making runs off him.

“The midfield would have to be better defensively because he wouldn’t be asked to track back and defend.

“I think it works at Manchester City, I’m not sure if it would work at many other clubs.”