James Maddison had a word in the ear of Mohamed Salah before the Liverpool star had his first-half penalty saved but as the Leicester playmaker heads into the decisive phase of his career, he should listen carefully to the words of two Premier League greats.

Maddison turns 26 on November 23, five days after the opening game of the 2022 World Cup is due to take place. For a player of his talent, it seems remarkable that he has only one England cap – as a second-half substitute in a 7-0 win over Montenegro in November 2019 – to his name.

With six goals and five assists in his last eight matches before this encounter, Maddison faced Liverpool in prime form. Just as he was last winter, Maddison has been one of the best creators in the country in recent times. The challenge now is to maintain this level for the remainder of the season, and those that follow. 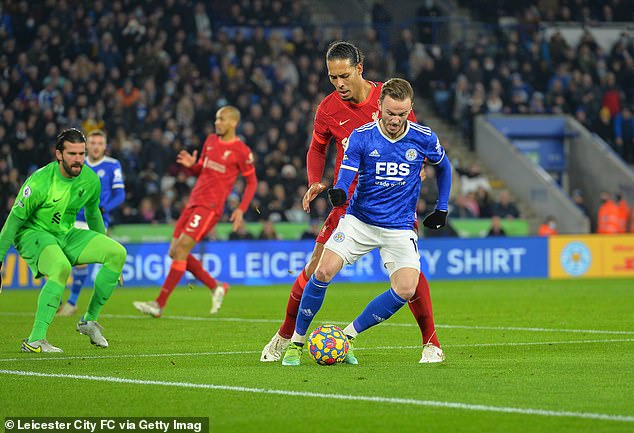 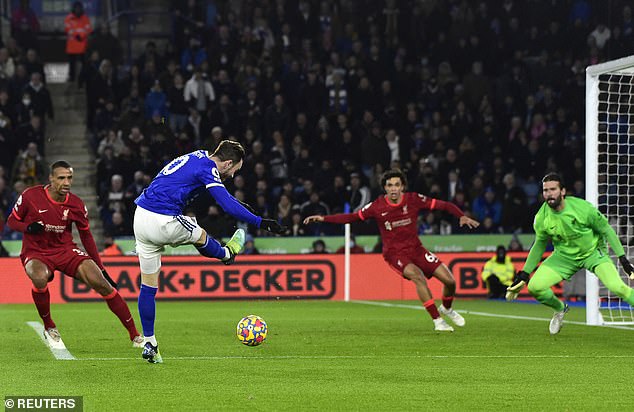 Thierry Henry and Alan Shearer are among English football’s greatest players because they did precisely that. Shearer’s 260 goals in 441 Premier League appearances is unsurpassed, while Henry’s 175 – plus 74 assists – in 258 games for Arsenal guaranteed his place in the pantheon.

‘It’s about consistency,’ said the Frenchman, in his role as a television pundit for this game. ‘I have a lot of people in my neighbourhood who have talent but some of them are still in my neighbourhood. You have to show that all the time – give me 10 years.’

‘It’s one thing being at the top of your game – and he’s been somewhere near there in the past – but it’s another thing staying there,’ added Shearer. ‘He’s got to do that on a consistent basis for years.

‘He’s brave on the ball. If you want to ping that ball into him, he can control the ball, he can take a touch, he can bring other people into the game. His weight of touch is superb. He can go past people and use his ability.’

Maddison is a football obsessive who grew up idolising the Premier League stars of the early 2000s, and he will surely take these opinions to heart. Leicester boss Brendan Rodgers believes he is maturing as a player by showing greater defensive discipline. It is for Maddison to prove he is also doing so away from the game, after high-profile mistakes in the past.

At times, Maddison reminds you of Kevin Pietersen, capable of moments of brilliance on the pitch and occasional daftness off it. Though he is some way from matching the achievements of the great former England batsman, he is just as exciting to watch when in full flow.

Operating just behind strikers Jamie Vardy and Kelechi Iheanacho, Maddison was paid close attention by Liverpool midfielder Fabinho yet still shone when he had the chance. A clever spin in the 35th minute allowed Maddison to release Vardy, who saw his shot blocked by Joel Matip after a clever exchange with Timothy Castagne.

Another Vardy-Maddison combination gave Leicester’s No 10 room to drive a low ball across the six-yard box, which would have provided a tap-in for Kelechi Iheanacho had the Foxes man run to the near post instead of staying deeper. 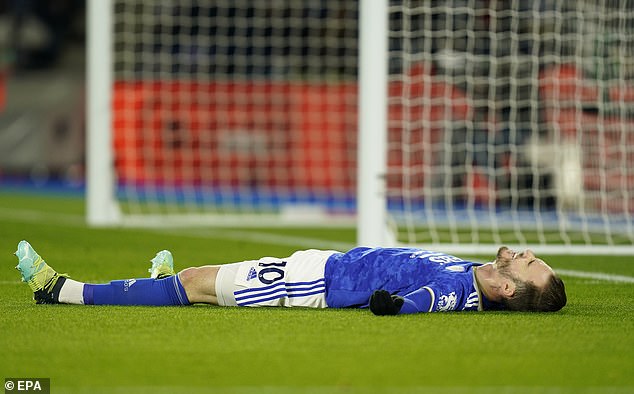 Though this was his third match in seven days, Maddison showed impressive durability here, blocking a cross from Sadio Mane one moment before charging on to a pass from substitute Ademola Lookman the next, and then tracking back with Kostas Tsimikas to concede a corner as the visitors probed for an equaliser.

Sadly for Maddison, that was his last contribution. After sliding in on Tsimikas, he signalled immediately to the bench that he was in pain and was quickly replaced by Marc Albrighton.

Ever the showman, Maddison applauded all four sides of the ground as he left the field and shook hands with Liverpool boss Jurgen Klopp before being embraced by Rodgers. Maddison deserved the appreciation after showing once more he has substance to go with the style.