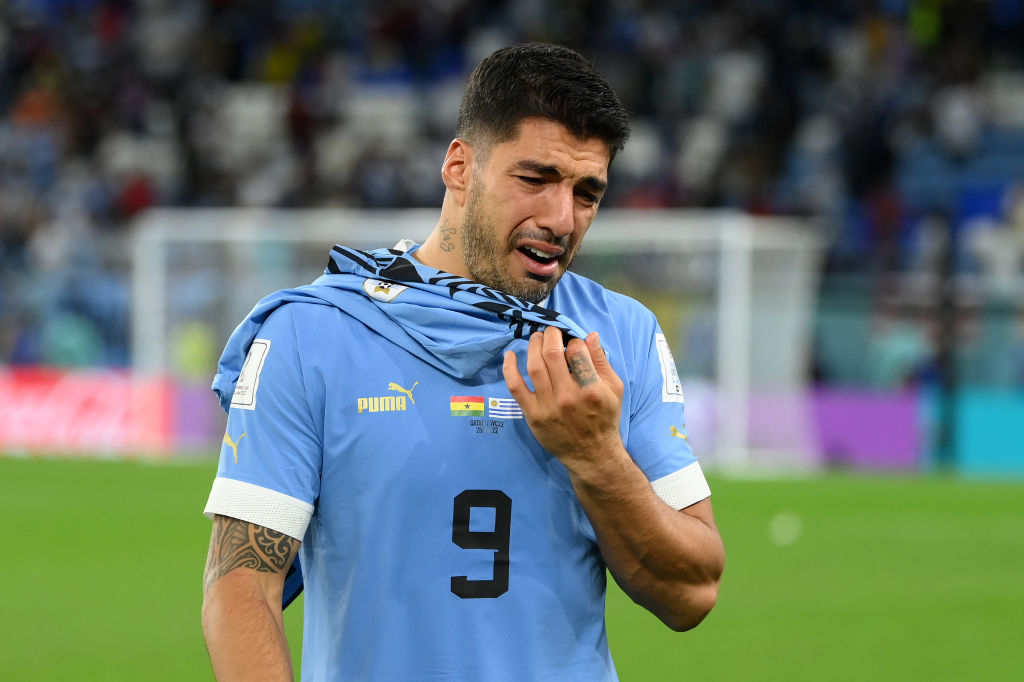 Uruguay legend Suarez broke down in tears as his team were knocked out of the Qatar World Cup despite beating Ghana 2-0 in their final group game.

It looked as though that win would be enough to send Uruguay through to the knockout stages but South Korea’s injury-time winner against Portugal turned Group H on its head.

Friday’s results meant Portugal topped Group H while South Korea and Uruguay both finished on four points, with the former going through having scored more goals during the group stage.

Suarez gave a measured reaction to Uruguay’s World Cup exit on social media but ripped into FIFA in a post-match interview.

Writing on Instagram, he said: ‘Saying goodbye to a World Cup hurts a lot, but we have the peace of mind that we left everything for our country.

‘Proud to be Uruguayan even though they don’t respect us. Thanks to each of the Uruguayans who supported us in every part of the world!’

Speaking to TeleDoce, the former Barcelona and Liverpool striker added: ‘I feel sadness and disappointment.

‘My son is also leaving the stadium with the image of that sadness, so for a father it is difficult.’

Suarez blasted FIFA and the officials at the Al Janoub Stadium for refusing to award Uruguay a penalty against Ghana. Both Edinson Cavani and Darwin Nunez appealed for spot-kicks in the second-half of Friday’s clash.

‘I see a penalty for Cavani because he is cut off by the defender and he puts his body in front of him,’ Suarez said. ‘Darwin’s is very clear too.

‘They are not excuses, but incredible penalties are being awarded in this World Cup. And there is the committee of referees and FIFA, and they have to try to explain themselves better, at least.’

Suarez then claimed he tried to greet his wife and children in the stadium but was denied by FIFA, adding: ‘I saw a France player with his children on the substitute bench.

‘So why always [is it a problem] against Uruguay? It seems that we have to have another power at the media level to have access and to allow my children to come down for a second to greet me, but hey, that’s FIFA.’