Liverpool host Leicester live on Sky Sports this Sunday with just one point dividing the sides – but how do the teams shape up and what tactical battles could emerge?

Tottenham, Chelsea and Aston Villa are all gunning to reach the summit on Saturday but Leicester will guarantee top spot for another round of fixtures if they pull off a win at Anfield.

Indeed, Liverpool could reign supreme if results go their way – but Jurgen Klopp’s side will be only too aware of how their upcoming opponents turned over arch-rivals Manchester City two months ago.

Brendan Rodgers’ side rocked City with a 5-2 win at the Etihad in September, when Pep Guardiola started understudy centre-back Eric Garcia to cover Aymeric Laporte, who was benched after recovering from coronavirus, and partner Nathan Ake – two days before the club signed Ruben Dias. 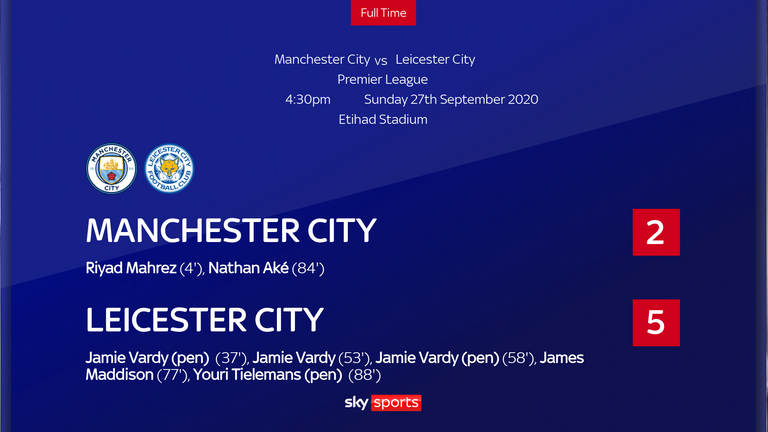 Can Leicester reap similar success against the injury-ravaged champions this weekend? We tackle the major talking points and take a look at the clubs’ strengths, weaknesses and styles…

What about the injury lists?

Liverpool’s injury woes were dealt another blow during the international break after Joe Gomez suffered a serious knee injury, Jordan Henderson was forced off with a leg injury and Mohamed Salah tested positive for coronavirus.

Reserve centre-back Rhys Williams looked set to challenge Nat Phillips for a start against Leicester if Fabinho is ruled out – but he too withdrew from the England U21 squad as a precaution on Tuesday with a hip problem.

Those casualties add to a raft of team-mates already in the treatment room, including Virgil van Dijk, Trent Alexander-Arnold, Thiago and Alex Oxlade-Chamberlain, while Fabinho is close to a return.

Andy Robertson also missed Scotland’s 1-0 win against Slovakia with a strained thigh but returned to action without any issues in the defeat to Israel on Wednesday evening.

Leicester have had their fair share of crocked stars but a host of those are back in contention to start this weekend, including Wilfred Ndidi, Ricardo Pereira, Timothy Castagne, and Wesley Forfana.

But centre-back lynchpin Caglar Soyuncu is not expected to return until December and defensive midfielder Daniel Amartey remains sidelined with a hamstring injury.

The Foxes topped the league table heading into matchday nine despite creating a mere 45 chances – only Burnley have carved fewer. And, as of Friday, only five clubs have recorded fewer than their 55 unblocked attempts at goal.

Last season, only Manchester City, Chelsea and Liverpool created more chances than Leicester – so there is clearly a creative drought this term.

But what is behind the dip?

Primarily, James Maddison’s game time has been limited to just 270 minutes out of a possible 720 as he returns to full fitness, having carved a team-topping 79 opportunities last term.

In terms of the full-backs, James Justin is creating fewer chances per 90 than Chelsea-bound Ben Chilwell achieved last term – although summer signing Castagne is on par with Ricardo’s impressive creative returns.

So how have Rodgers’ men climbed to the Premier League summit? Some wild results across the division have helped the cause – but the numbers also reveal their strengths: accuracy and economy in front of goal. The Foxes are clinical.

In total, 38 of their 55 unblocked shots have been on target – producing a league-high accuracy rate of 69 per cent going into this round. And they have scored 18 of those 55 attempts – another league-topping rate, at 33 per cent.

Can Vardy exploit the space? Manchester City have the highest defensive line at 46m from their own goal, according to the starting distance of open-play passing sequences. Liverpool are just a fraction behind that at 45.7m. So there should be plenty of space for Jamie Vardy.

Liverpool will be missing at least three of their first-choice back four – so the high line could be vulnerable.

How have Leicester won eight penalties?!

Leicester have been awarded a league-topping eight penalties in eight games, of which three were converted during the win at City. Vardy has taken six of those spot-kicks and converted five – missing one against Wolves.

Vardy has scored only three of his eight league goals from open play this season.

Indeed, Vardy’s movements across defenders in the box won two penalties at City and one against West Brom, so Liverpool’s challenge is to reach through balls first – without committing costly collisions or rash challenges if wrong-sided.

Fabinho conceded a penalty against Sheffield United in October 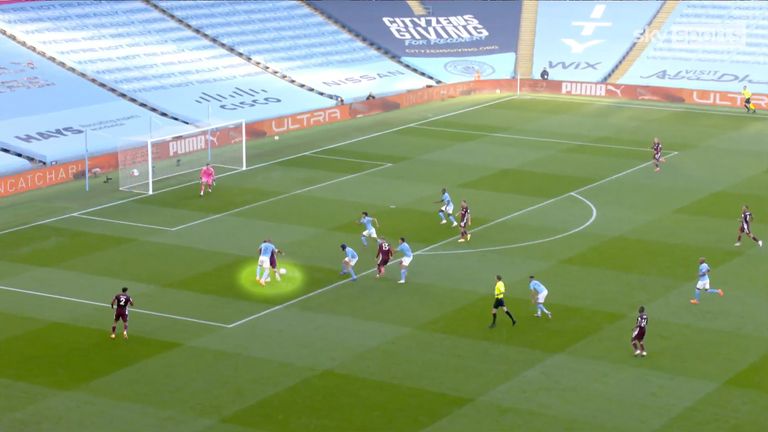 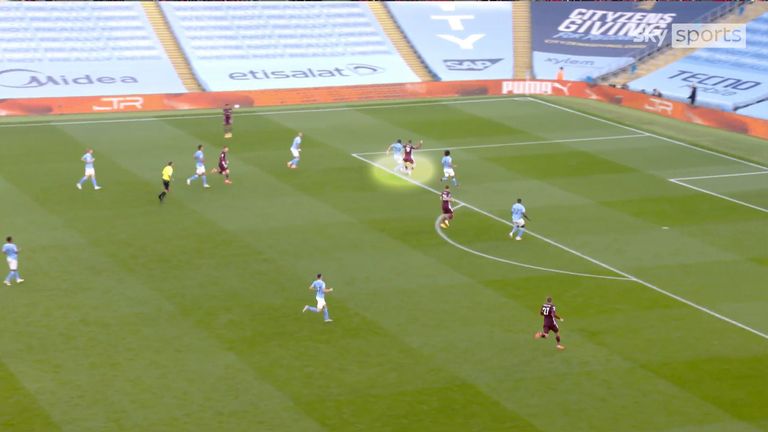 Incredibly, the Foxes’ penalty count has been achieved with only 164 touches in the opposition box – nearly half the total clocked by their upcoming hosts.

Where are the teams most dangerous?

Leicester will need to track Sadio Mane’s runs into central areas, potentially from the right flank in the absence of Salah, while in-form Diogo Jota is likely to pose a threat with similar infield railroads from his favoured left channel. Liverpool’s makeshift defence will be prepared for a race back to goal if Vardy breaches the high line from a long or through ball – typically firing his open-play goals from in and around the six-yard box.

Castagne has provided much of Leicester’s current creativity but that could be boosted with Maddison close to full fitness – having also scored a stunner from range after coming on as a substitute against City. 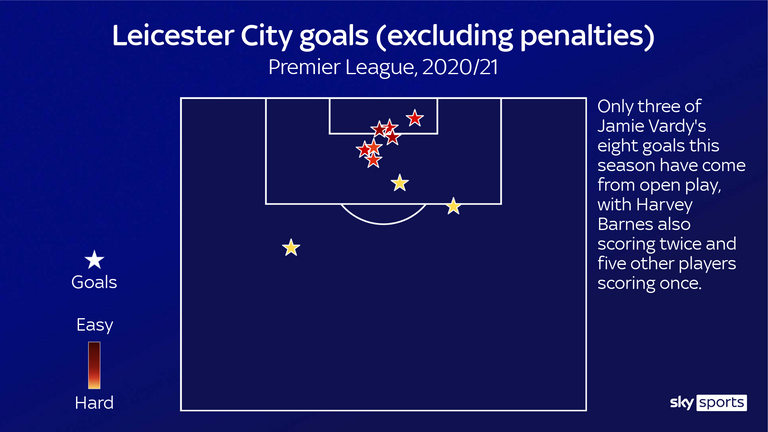 Which formations will be used?

Liverpool have become synonymous with the 4-3-3 system in recent seasons but Klopp has been mixing things up of late, lining up in a disputed 4-2-4 against City last time out, which was also interpreted as a 4-4-2 or 4-2-3-1. Rodgers has won three games in a row after switching to a more reserved 3-4-2-1 diamond formation, perhaps a move to help mitigate the spate of injuries – an approach which looks likely to be deployed this weekend. What about pressing & passing?

Leicester defeated City with only 28 per cent possession – only four teams have recorded less in a game this season – and that share could be repeated on Sunday: Klopp’s side average at 61 per cent, behind only City (62 per cent).

The Reds are renown for their high press but Leicester excel among top-half clubs for breaking down opponents in their defensive third.

However, Liverpool’s wingers lead the way for turnovers in the attacking third and will test the Foxes’ solidity with relentless pressing and counter-pressing. 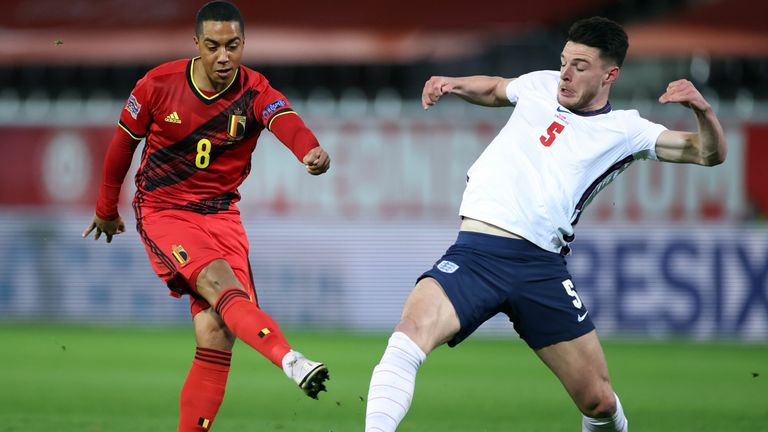 Both teams press in the middle of the pitch, with Leicester midfielders Youri Tielemans and Nampalys Mendy reclaiming possession most among the sides. Against City, Mendy evaded the press in the build-up to Vardy’s first penalty. 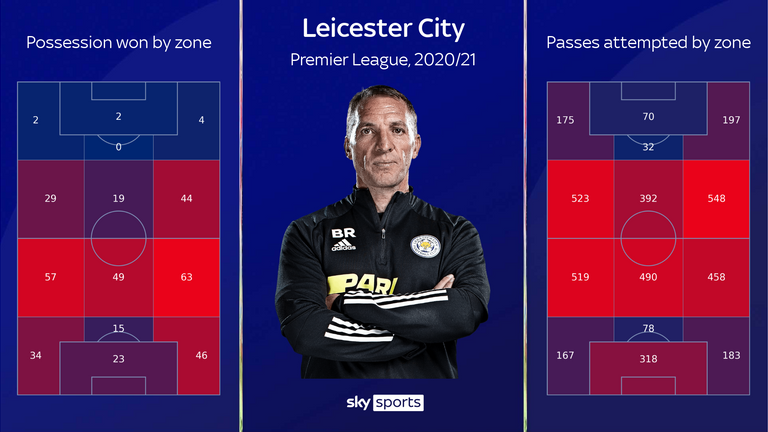 Who will line up for Liverpool?

With Salah out, you might expect a return to the 4-3-3 but it depends on the injury situation around the club.

Liverpool will be looking to keep Jamie Vardy quiet, they haven’t kept a clean sheet in the Premier League since the second week of the season, and we’ve seen what great form Vardy is in.

If Fabinho is fit and comes in, that’s a boost for Liverpool, but attack-wise how will they cope without Salah?

Looking back at the Aston Villa game, and there was a feeling that missing Sadio Mane affected Liverpool quite a bit, and now what role will Diogo Jota play if he replaces him, and can they keep those kind of levels?

We’ve asked the question of Klopp of whether he’s now got a front four, and maybe this will give us some indication of whether that’s the case. 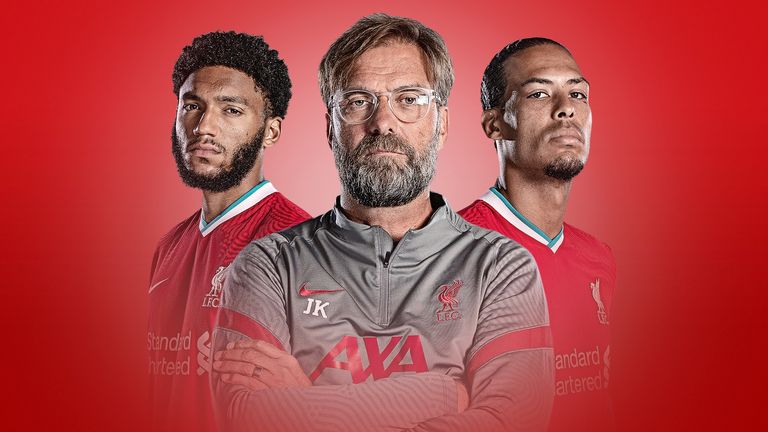 Data compiled by Premier Injuries reveals Jurgen Klopp’s side have indeed picked up a league-topping 17 significant lay-offs this season – one more than Manchester City.

The spate of misfortune has resulted in six different starting centre-back partnerships in just eight league games and the table below suggests Klopp will be hoping Fabinho is fit to partner Matip when the Reds face Leicester on Sunday live on Sky Sports – with Nat Phillips and Rhys Williams, if fit, in reserve. 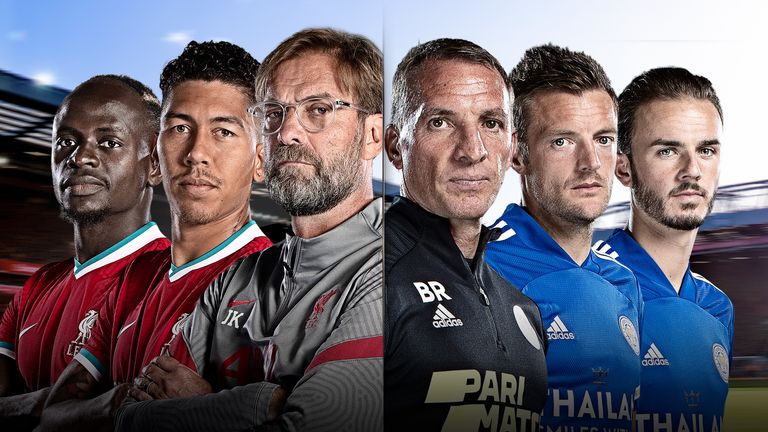 Liverpool vs Leicester will be shown live on Sky Sports on Sunday when the Premier League champions take on the current league leaders in a mouth-watering top-of-the-table clash.

The match has been confirmed as being broadcast live on Sky Sports following the Premier League’s decision to discontinue their pay-per-view model which was introduced in October.

In a statement, the league confirmed ‘all fixtures from Saturday 21 November, and throughout the Christmas and New Year period, will be made available to fans to watch live in the UK.’

‘There is a full schedule of Premier League games over the festive period and clubs are committed to an accessible solution for fans. These plans have been made with the cooperation of our broadcast partners, working with us to deliver these additional matches while stadiums are missing the supporters who are such an integral part of the game.’

Liverpool vs Leicester – which has been rescheduled for a 7.15pm kick-off on Sunday night – is one of three extra matches to be shown on Sky Sports this weekend.

Burnley vs Crystal Palace and Wolves vs Southampton will also be broadcast live on Monday November 23.