Liverpool hero Danny Murphy claims Manchester United legend Paul Scholes was the player he feared playing against the most. Murphy, who famously scored the only goal in three 1-0 wins for Liverpool at Old Trafford, spent seven years as a player at Anfield in the early part of his career.

Speaking on the Squeaky Bum Time podcast, Murphy was asked which player as a youngster he was most excited at playing against.

First he named former United captain Roy Keane, before choosing Scholes – though he admitted it was more fear than excitement.

“Well for me I think initially the excitement comes from going to the big stadiums that you’ve always watched teams play at growing up,” Murphy said.

“Probably the one player who I [was excited the most playing against was] Roy Keane initially because of his repuation and his talent of course. 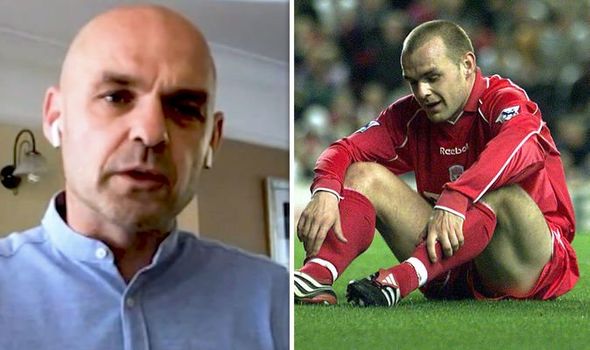 “But over time probably Scholes was the one player I always, it wasn’t so much excitement, it was more ‘Oh my God, what can I do with him today?’ because when I did play centrally, because I mixed up my positions, when I played centrally against Scholesy I did struggle with him because he was so clever that if you pressed him too hard he would play round you and see you coming, and if you sat off him he’d run the game.

“So you were always caught in-between and he was probably the one player that I looked on the teamsheet and thought ‘Oh here we go again’ type thing.

“But mostly, most of the time when you come up against better players it’s a challenge, it’s what you play for, to pit yourself against those top boys.

“But the excitement came from going to Old Trafford or Highbury for the first time, that was the real buzz when you first started.”

Meanwhile, Scholes has had his say on how the Premier League season can be ended following the break due to the coronavirus pandemic.

“Players these days are so fit – they are like machines half of them – so I think they only need two weeks of full training to get back in to it and hopefully by June 10, 11 or 12, they should be ready to go,” Scholes said on Sky Sports’ The Netball Show.

“I think domestically, we can get the league done, the FA Cup done.

“But, I think domestically, we can get the season done in five or six weeks, have a break and then get into next season as well.”