Football is quite the thing when coloured by supporters; emotion and noise enveloping a stadium with genuine meaning given to trying to kick the round thing into the rectangular thing.

That the backdrop, the game’s soul, returned as arguing about lines on a screen and what constitutes a ‘clear and obvious error’ dissipated, it felt as though we welcomed the sport we love back – just in the way we love it.

It is too early to hop, skip and jump to mass conclusions about the campaign ahead based on one matchweek, but there were interesting developments to note and follow.

Liverpool offer reminder of title credentials, but will relish being an aside to the conversation

There was a sea of annoyance when season predictions were published.

Liverpool supporters were aghast to find the majority of pundits had forecast a title battle between Manchester City and Chelsea. Had they forgotten that over the past three terms, including their injury-ravaged 2020-21, Jurgen Klopp’s men have posted the same points’ total as Pep Guardiola’s machine — and won the Champions League?

Liverpool have not been discounted from earning league honours as much as City and Chelsea’s spending dictate that either club not finishing in pole position – especially in the case of the current holders should they land Harry Kane – is failure.

The Merseysiders will set themselves the expectation of being champions again and getting overlooked now serves as another motivational tool. Liverpool, with colossus Virgil van Dijk and the rest of the defence restored, are formidable. The only two posers are whether the absence of Mohamed Salah and Sadio Mane during the Africa Cup of Nations can be absorbed or aided in the market and if those on the midfield fringes can do enough to supplement the Fabinho-Thiago-Henderson axis over a season.

Should Liverpool triumph despite the financial flexing of City and Chelsea, it will be a sizeable feat.

Rafa Benitez’s tweaks have to keep coming up good

Everton’s transfer planning has been completely crushed by the Premier League’s profit and sustainability rules having breached them with a combined loss of almost £265m in the three years up to 2019-20.

The £1.7m outlay on Demarai Gray is their only fee this summer, although Andros Townsend and Asmir Begovic have also been added to the squad. The former two made their debuts on Saturday and impressed in the victory over Southampton, offering extra threat inside and out wide.

But the big on-pitch difference was in the form of Rafa Benitez’s half-time tweaks. With Everton struggling aerially, losing duels and looking laboured in possession after going behind, the Spaniard switch the positions of both central defenders, Mason Holgate and Michael Keane, as well as that of Richarlison and Gray.

“The first thing to do at half-time was to give them confidence,” Benitez explained.

“We had some problems with the ball in the air and with second balls. We changed the positions of the centre-backs and changed the position of Richarlison and Demarai Gray to help us link better and give us something more in the wide areas and between the lines. We played with the character and intensity we were looking for in the first half.”

Given his limited squad and the inability to fund a decent refresh, Benitez’s tactical tweaks might have to continue the trend of earning Everton points.

Brentford bring a buzz and the template to hurt Arsenal

The new season could not have started in more moving fashion. After 74 years, Brentford were back in England’s top flight and marked the occasion by preying on Arsenal’s weaknesses before having an on-pitch party to celebrate their spoils.

How to get at Mikel Arteta’s side is no secret, but the division’s newcomers wonderfully married a variety of methods to provide a template on how to make the Gunners uncomfortable and unsettle their £50 million signing Ben White.

Brentford had identified Pablo Mari’s lack of conviction in possession and aggressively pressed him. White, meanwhile, was bombarded with long balls battles against Ivan Toney, coming off a distinct second best.

Thomas Frank admitted Brentford banked on Arsenal’s frailties at deadball situations and both of the club’s goals materialised from that avenue.

“On set-pieces I thought we were better,” Frank said, adding “that’s why we did long throws and at times we could go high and knew that we could win the ball and create chances.”

Arteta’s men helped implement Brentford’s plan. Arsenal failed to clear a corner, which ultimately led to a beauty from Sergi Canos, before they were undone by a throw-in, which Christian Norgaard converted.

It’s only one loss and the season is but an embryo, but the North Londoners have more problems than solutions. And eek, Chelsea and City are next up.

Varane’s unveiling special in more ways than one

What a welcome sight it was. No convoluted social media video involving pianos or some other nonsensical gimmick, just a superstar in Raphael Varane secretly being brought out of the tunnel, new kit in hand, and paraded around the Old Trafford pitch to set the tone on an unforgettable afternoon for Manchester United.

Transfers have become the preserve of the online space – ‘any news, mate?, ‘announce X,’ ‘X announced’ – and so it was refreshing to see match-going fans, plus those watching around the world, to see a signing being unveiled in a real football setting rather than a manufactured one.

There was another nice little touch to the scene. After holding his shirt aloft and clapping the crowd, Varane headed over to former United defender Rio Ferdinand, who was doing punditry work at the touchline.

The France international used to consume clips of the 42-year-old as a way to improve his game. Varane’s appreciation of Ferdinand was widely known and prompted United to make an approach for him while on the books of Lens in 2011.

A strong sales pitch was only undone by the presence of Zinedine Zidane as Real Madrid’s sporting director, who went on a full charm offensive to successfully entice the centre-back to Spain’s capital.

The ‘Harry Kane team’? Well, maybe not so much

Guardiola’s description of Tottenham, reducing them to a one-man team – a man he is now trying to sign – still rankles at Hotspur Way. While it is foolish to suggest that Kane won’t be a loss to the club if he does move to City for silly money, the north Londoners illustrated that the collective can triumph without the golden, unsettled individual. 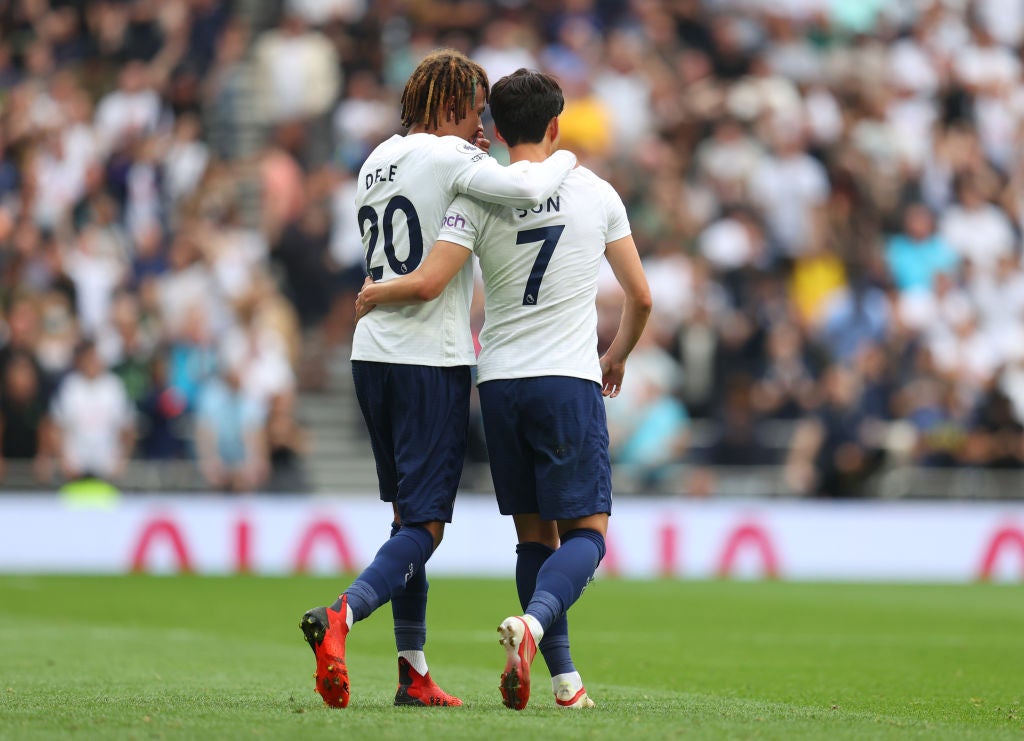 Lucas Moura’s stretching runs were central to Tottenham’s superb victory over City, while Steven Bergwijn was built for a transition game. Dele Alli looked to be enjoying his football again and turned in quite a defensive shift to aid Nuno Espirito Santo’s compact-and-counter cause.

Japhet Tanganga was utterly excellent, despite Jack Grealish and Raheem Sterling doubling up on him. Oliver Skipp was a terrier, and it was a sight to see the maligned partnership of Eric Dier and Davinson Sanchez in the heart of defence offer a titanic performance.

Son Heung-min, the matchwinner, remains one of the standout talents in the league and has a habit of excelling when Kane is unavailable.

The make-up of Tottenham’s squad suits transition football and the true test will come when they have to construct play against deep-lying defences, more so if Kane departs.

Nuno wasn’t first or even fifth choice to guide this team, but given the enormous cloud he has operated under, this was a seriously strong start to his tenure.

City, considering their struggle in front of the sticks, might yet morph into the ‘Harry Kane team.’