Budapest: Mohamed Salah and Sadio Mane pounced on defensive mistakes to score Liverpool’s goals in a 2-0 win over Leipzig in the Champions League on Tuesday (Wednesday AEDT), giving the six-time European champions some respite amid an alarming slump in form domestically.

Paris Saint-Germain’s Kylian Mbappe, meanwhile, scored a stunning hat-trick as his side overcame the absence of Neymar to thrash Barcelona 4-1 away in their last-16 first leg to move within full view of the quarter-finals. 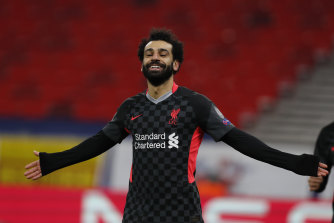 Liverpool’s Mohamed Salah celebrates one of the goals which gave the Reds hope of salvaging their season in the Champions League.Credit:AP

The Champions League is the only trophy Liverpool can win this season after dropping out of the Premier League title race unexpectedly early, and Juergen Klopp’s side are already in sight of the last eight after being given a helping hand from Leipzig.

Salah latched on to a misplaced pass from Marcel Sabitzer back to defender Lukas Klostermann in the 53rd minute, raced into the area and slotted his finish past former Liverpool goalkeeper Peter Gulacsi.

Only five minutes later, a long ball forward was misjudged by Leipzig defender Nordi Mukiele, allowing Mane to run clean through and dispatch a similarly sharp effort beyond Gulacsi.

The first leg of the teams’ last-16 match was played at the Puskas Arena in Hungary because of German restrictions on arrivals from Britain amid the pandemic. Aside from their two-goal advantage, Liverpool will have the added benefit of playing the second leg on March 10 at their home stadium, Anfield, albeit without fans allowed. 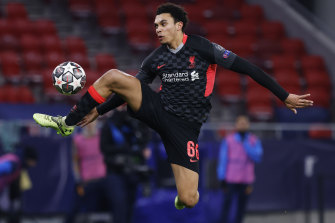 An acrobatic Trent Alexander-Arnold of Liverpool.Credit:Getty

“A lot of people were waiting for us to slip again,” Klopp said. “And tonight the boys didn’t and I’m really happy for them.”

Klopp struck a defiant mood ahead of the match, insisting he would not be quitting or taking a break despite looking worn down by his team’s dreadful run of results of late. The Reds, who have won just two of their last 10 Premier League games, are now in sixth place in their creaking title defence and battling just to qualify for next season’s Champions League.

This win, against a team in second place in the Bundesliga and who reached the Champions League semi-finals last season, will be a morale-booster for Klopp’s side. Especially since it came with a clean sheet, a rarity for Liverpool’s injury-hit defence that was again being propped up by new signing Ozan Kabak and midfielder Jordan Henderson.

“We just want to keep fighting, every time we play,” said Henderson, Liverpool’s captain. “There’s been a lot of difficult situations throughout the season but we’ve just got to keep going. And tonight was a good step in the right direction for us.” 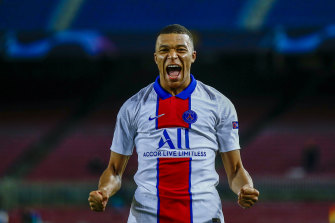 Kylian Mbappe is the first visitor in almost 25 years to score a Champions League hat-trick at the Camp Nou.Credit:AP

In Barcelona, Lionel Messi had put the Catalans in front by converting a first-half penalty but Mbappe led PSG’s comeback in the absence of the injured Neymar. In the teams’ first meeting since Barcelona’s memorable 6-1 victory to reverse a 4-0 loss at the same stage nearly four years ago, PSG again built a big first-leg advantage.

Mbappe scored five minutes after Messi’s opener and added two second-half goals to become the first player to score an away hat-trick at the Camp Nou Stadium in the Champions League since Andriy Shevchenko for Dynamo Kyiv in a 4-0 win in 1997.

Moise Kean also scored in the second half for PSG, last season’s finalists who looked far more dangerous than the hosts throughout the match at the empty Camp Nou.

The second leg will be on March 10 in Paris.

Barcelona was in control early on and opened the scoring with a 27th-minute penalty after Frenkie de Jong fell in the area when his heel was clipped by defender Layvin Kurzawa.

Messi fired a left-footed shot into the top corner for his 10th goal in the last 10 matches.

Mauricio Pochettino’s PSG immediately pressed forward and equalised five minutes later after a nice exchange of passes inside the area, with Mbappe controlling the ball and shooting it into the top of the net from close range after a clever one-touch pass by Marco Verratti.

PSG continued to play better and Barcelona goalkeeper Marc-Andre ter Stegen had to make a few good saves before Mbappe put his team ahead from inside the area in the 65th.

Kean added to the lead five minutes later with a header off a free kick, and Mbappe sealed the scoring by finishing off a quick counterattack by curling a first-time shot into the far corner in the 85th.

The goals allowed Mbappe to pass Pauleta for third place on the club’s all-time scoring list with 111.