Lionel Messi “would be happy” to join Manchester City from Barcelona this summer, according to Sky Sports reporter Kaveh Solhekol. Messi told Barcelona on Tuesday that he wants to leave the club in this transfer window. The news had led to wide speculation over where the Argentina superstar could end up.

City are favourites to sign Messi and have been linked with the 33-year-old in the past.

Solhekol says the Etihad club are one of few teams in England who could afford a deal for Messi.

And he claims the forward would be open to playing for City, who are managed by his former Barca boss Pep Guardiola.

“If we’re talking about the Premier League, there are potentially very few clubs who could afford to finance a deal for him,” Solhekol said on The Transfer Show.

JUST IN: Man Utd target ‘ready to be sold’ in deal Greenwood may prefer over Sancho 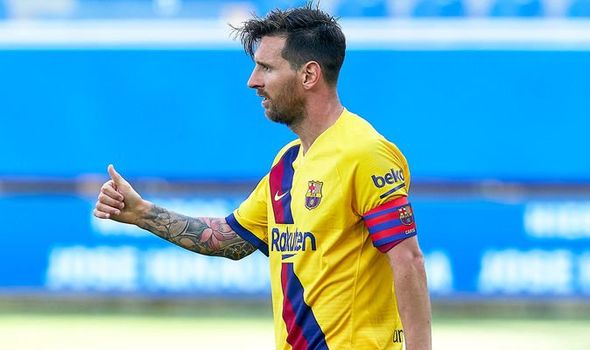 “Obviously the club that everyone is talking about is Manchester City.

“Now, the information that I have is that he would be happy to play for Man City. But that does not mean that he is going to become a Manchester City player.

“What we’re hearing is that as far as Manchester City are concerned, there’s still a very, very good chance that he could remain at Barcelona this summer.”

Meanwhile, Spanish football expert Alvaro Montero claims there is a “huge possibility” Messi will join City if he does end up leaving Barca.

“As we have said before, Manchester City because of the money, because of the Premier League situation, because Pep Guardiola and because everything altogether is a good situation for Leo Messi.

“If I have to bet for one club, obviously I would say Manchester City.

“It’s not new but it’s my opinion after what we’ve seen, the Premier League has a lot of money and Pep Guardiola has been there for a lot of years.

“We know the union of Guardiola and Leo Messi in FC Barcelona was amazing, maybe the best team in the world ever.