Leeds United have shone during their first six Premier League games after a 17-year hiatus from the top-flight and their high-octane style endears most – but is it sustainable?

Marcelo Bielsa’s side produced a breathtaking performance in the season-opening 4-3 defeat with Liverpool, before back-to-back wins, holding Manchester City to a draw, a narrow defeat against Wolves and thumping Aston Villa 3-0.

The Yorkshire club sit 12th in the table but could move into third with a win over Leicester on Monday – some achievement when you consider they have already faced the league’s two most recent champions.

But their intense style of play is, perhaps, worthy of even greater acclaim.

Leeds are still lining up in the 4-1-4-1 formation that reaped table-topping promotion from the Championship last term and imposing the same principles on the field: relentless energy and menace. 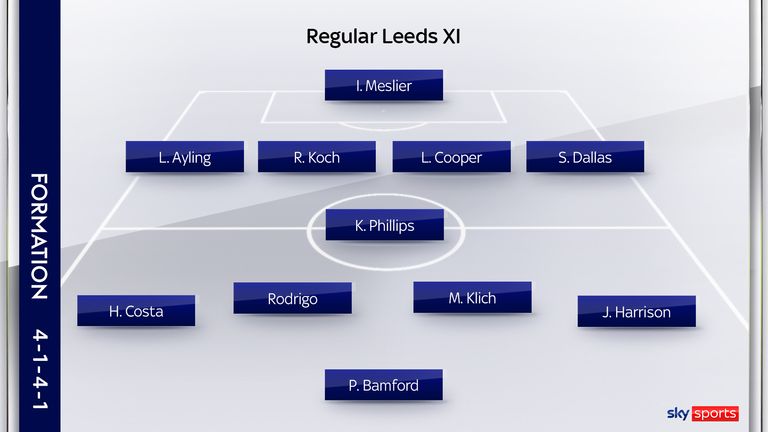 So how exactly do Leeds achieve this?

Leeds and Sheffield United top the Premier League for average distance covered this season with 114km per game – some 10km more than the likes of Fulham or Wolves.

But is this sustainable? Some may allude to Liverpool during Jurgen Klopp’s first full season in charge, when their running figures soared off the chart and arguably contributed to a post-festive collapse.

However, the figures below reveal, individually, few players are topping the distance chart. In fact, that collective distance is primarily achieved by the entire team covering an above-average number of yards.

Perhaps the two exceptions are Mateusz Klich and Kalvin Phillips, who could be sidelined until December with a shoulder injury – both of whom register an average distance of around 11km per 90 minutes.

So, in terms of covering distance, ubiquitous fitness without any standout trojans appears to suggest their work-rate could be sustainable across an entire campaign.

Bursting from the blocks

Here’s where the bubble could burst. Leeds also sprint more than any other team in the Premier League – by a huge margin.

Their average of 166 sprints per game is 25 more than second-ranked Liverpool. The chart below reveals the sheer scale of this achievement to date.

Turning on the afterburners at such frequent rates could provoke injuries and fatigue, with regular Jack Harrison producing a team-topping 21.86 sprints per 90 – although Leeds do have an abundance of options down the flanks.

But, again, the league-topping numbers are largely derived from a broad contribution, working as a collective unit and sharing the hard graft in almost equal measure – with seven other players ranging between 14 and 20 sprints per 90.

How does that translate in defence?

The graphic below reveals Leeds close down opposition passages of play more than any other team, limiting them to an average of just 8.7 passes before making a defensive action in the defensive and middle thirds of the pitch.

In more familiar statistics, this also plays out across a raft of metrics, including tackles, possession won in the defensive third and blocks – the latter further reinforcing the team ethos, to commit everything.

On the pitch, the central zonal visualisation below reveals how these numbers play out, with the majority of passes played midway inside their own half – with concentrations of activity down the flanks.

The passing network on the left shows a well-spread symmetry, with Luke Ayling and Kalvin Phillips providing primary links upfield, while the zonal visualisation on the right shows how Leeds enforce a band of resistance inside their half. 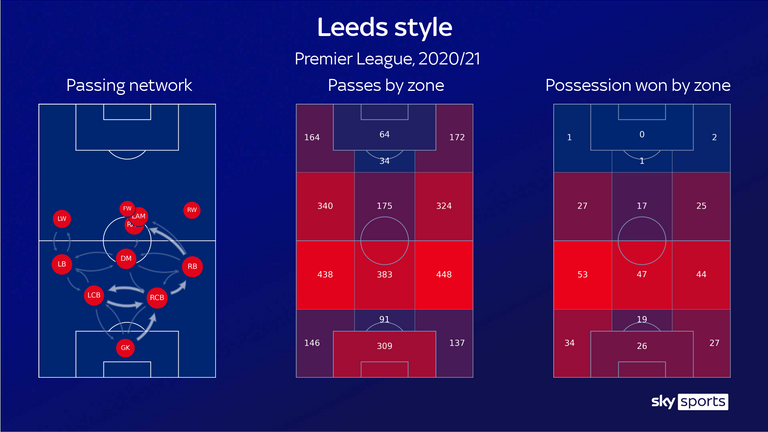 Drilling down into the players’ numbers, Stuart Dallas appears to be Leeds’ toughest workhorse so far, excelling at tackles and reclaiming possession – as has counterpart full-back Luke Ayling and Phillips in deep midfield.

What about in attack?

The high-intensity style also produces notable benefits in attack, with the club ranking second for frequency of direct attacks, direct speed and progress upfield in possession.

As is the case in their own half, the primary action occurs down the wings – with an equal proportion of attempts and threat coming down both the left and right channels. 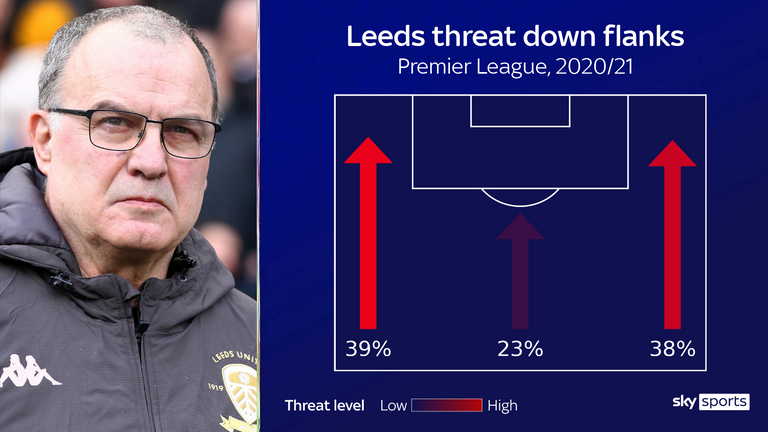 Bielsa’s side possess a unique style, epitomised by hard graft, commitment and team ethic, while the numbers indicate their intensity is fairly shared among the players and could be sustainable for the remainder of this campaign.

Leeds host Leicester on Monday, live on Sky Sports Premier League – another opponent from the upper echelons last term – and the visitors may struggle to match such intensity after their midweek Champions League exertions in Athens.