Leeds United’s social media team have trolled Liverpool over their inclusion in the European Super League. Leeds and Liverpool met in the Premier League at Elland Road on Monday night following a dramatic 24 hours in the world of football. The Reds are one of 12 founding clubs of the Super League which was officially announced late on Sunday.

Liverpool are one of six English teams to have signed up to the breakaway league.

Leeds are not part of the league and made their feelings pretty clear on Monday.

The account also tweeted images of the Leeds players warming up in T-shirts speaking out against the ESL. 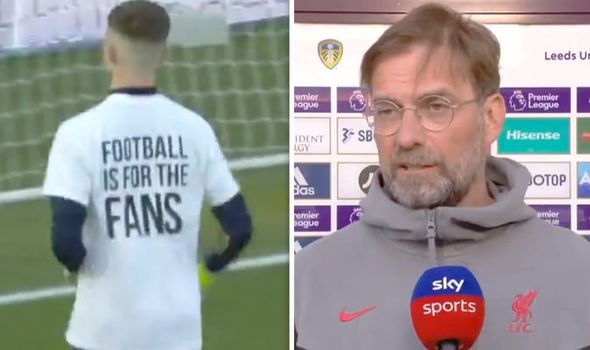 The front of the T-shirt read “Earn it” accompanied with the Champions League logo, with the reverse saying “Football is for the fans”.

Liverpool boss Jurgen Klopp reacted angrily after the same T-shirts were left in the away dressing room, which the Reds players did not wear.

“I heard already there are warm-up shirts or whatever. We will not wear them because we cannot,” Klopp told Sky Sports.

“But if somebody thinks they have to remind us you have to earn the Champions League, that’s a real joke.

“It makes me angry as well, they were in our dressing room. If it was a Leeds idea, thank you very much. Nobody has to remind us, they should remind themselves.”

Klopp gave an in-depth opinion on the breakaway league and insisted his opinion has not changed from 2019 when he spoke out against the idea.

“My opinion didn’t change,” he said.

“Obviously I heard first-hand about it yesterday and when you’re trying to prepare a game, a very difficult game against Leeds United.

“Then we got some information, not a lot to be honest, most of the things you more or less can read in newspapers or wherever.

“It’s a tough one. People are not happy with it, I can understand that, but there’s not a lot more I can say about it to be honest, because we were not involved in any processes.

“Not the players, not me. We didn’t know about it. That’s the fact, the facts are out there, and we will have to wait and see how it develops.”