Jurgen Klopp has denied it is time for a rebuild of his Liverpool squad but admits a top-four finish this season will be a big achievement.

Twelve of his current squad are 28 or over, with Fabinho, Andy Robertson, Diogo Jota, Joe Gomez, Trent Alexander-Arnold and Curtis Jones currently the only players under that age who have played a major part.

Only two – Thiago Alcantara and Jota – of Liverpool’s last six major transfers could be classed in the category of strengthening Klopp’s first-choice XI and both have missed large parts of this season through injury.

A run of two Premier League wins since Christmas has led some critics to suggest the squad needs refreshing after the achievements and workload over the last three years.

Klopp, however, disagrees and pointed to a lengthy injury list for being at the heart of the problem.

“I know what you mean but I don’t think it is time for a massive rebuild like how I understand it: six, seven out, running contracts but trying to get rid of them and bring in all the new faces.

“The squad of this year didn’t have the chance to play together one time really. I think it would make sense to have a look at that but on top of that, of course little readjustments will happen.

“Reacting on the situation but planning at the same time for the future and all these kinds of things.

“I am not sure we can do that in the summer but that is what we will try.”

A return of nine points from a possible 33 since thrashing Crystal Palace 7-0 on December 19 has seen the defending champions fall from first to sixth which has left them in a battle for the top four.

When asked to assess the achievement of qualifying for the Champions League in the face of an injury list which shows no signs of easing – after captain Jordan Henderson was ruled out for at least a month after a groin operation – Klopp said: “Big. Yes it would. Absolutely.

“You can see the competitors. Look, it is not about the possible performance.

“The game we played against Leicester [when they conceded three in the last 12 minutes] we lost, but the performance on the day was one with which the team usually wins.

“It is all about results. The table doesn’t lie. Never. That is completely fine. We know that performance-wise we are not that far away, but results-wise we are.

“That is what we have to change and for all the different reasons that it was a difficult season so far for us.

“We try with all we have to sort it and while you try and sort one problem another problem occurs. That is in a season when it is not going perfect, obviously.” 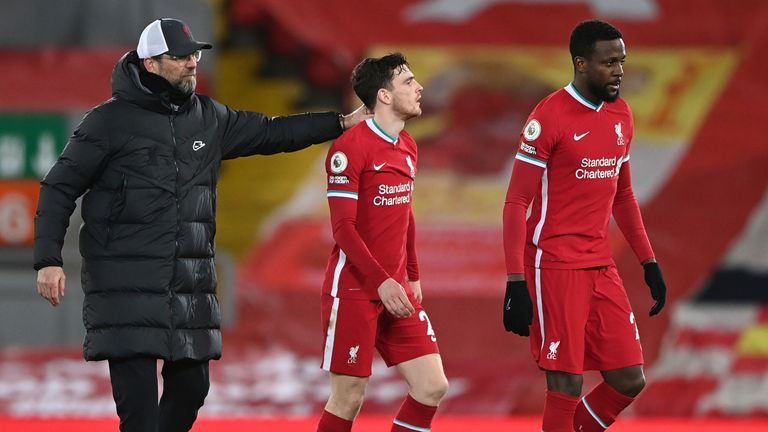 Despite an alarming drop off in results since December, Klopp insists he does not attribute the blame to his players.

Liverpool’s struggles have wrecked their title defence but Klopp insists “careers don’t end after this season” and is confident there are positive lessons the club can take.

“We will try everything this season but there are so many things we can learn from it,” Klopp said.

“And while we are doing that we go through this (tough period) but our football lives – our career – doesn’t end after this season.

“I don’t go and put the finger on my players and blame them for the situation – I don’t do that.

“We are all responsible for it, I am mainly responsible for it. What we go through now, we have to sort problems now, immediately, and in the long term we can get the benefit of what we are going through in the moment.

“It’s not cool but there are much worse things out there than the situation we are in as a football club.

“Maybe the important message even in this moment is we are still Liverpool and that is what we feel.

“We are Liverpool when we win 20 games in a row or whatever and don’t lose, and not when we lose matches? No, we are still Liverpool.

“That, of course, gives me energy, so I am not here only for the big celebrations, I am here for the work.

“And if it is the dirty work, the hard work, no problem.”

Redknapp: It’ll be a surprise if Liverpool make top four 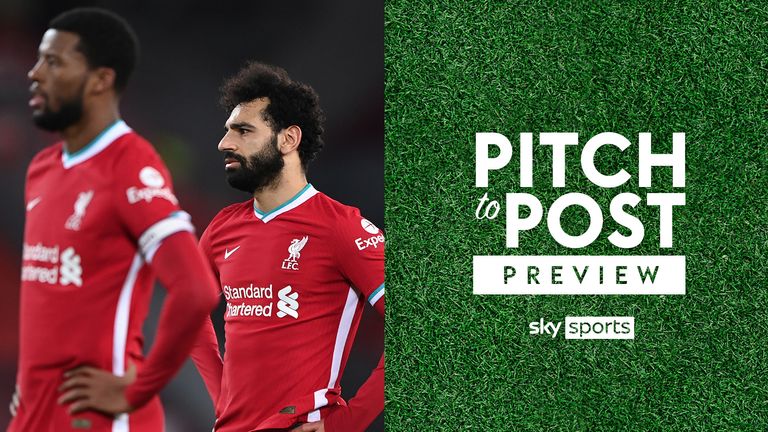 Jamie Redknapp says Liverpool’s injuries and their drop-off in confidence and performance levels makes a top-four finish tough – but expects them to roar back next season.

The defending champions’ Merseyside derby defeat at home to Everton on Saturday made it six defeats in their last nine games and with captain Jordan Henderson the latest centre-back option to be struck by injury, Liverpool’s hopes of a Champions League qualifying spot are in doubt.

Speaking on the latest Pitch to Post Preview Podcast, Redknapp believes Liverpool’s “fear factor is gone” and there will be no quick turnaround in their fortunes, with the Sky Sports pundit predicting more setbacks for Jurgen Klopp’s side between now and the end of the season.

However, he says Liverpool supporters can be optimistic of a return to form in 2021/22 when fans are back at Anfield, and Virgil van Dijk is fit again, and belief is back in the team.