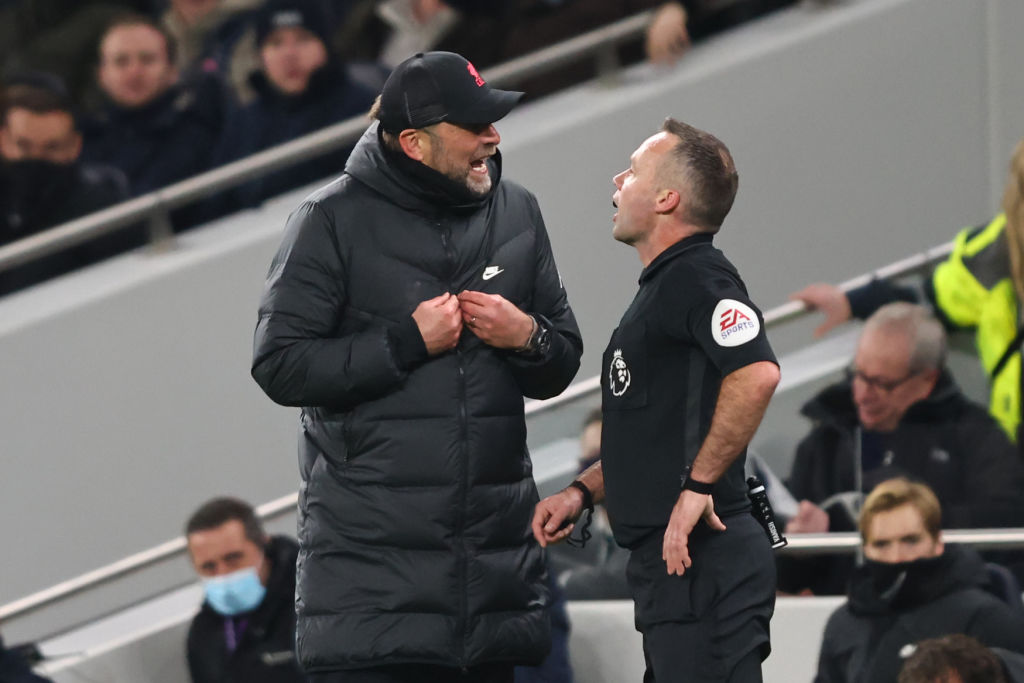 Jurgen Klopp will face no further action from the FA for his comments aimed towards referee Paul Tierney after Liverpool’s 2-2 draw against Tottenham on Sunday.

Klopp was left fuming by several decisions Tierney made during the match including when he chose not to send off Spurs striker Harry Kane for a tackle on Andrew Robertson, while Liverpool were also denied a penalty when Diogo Jota went down following pressure from Emerson Royal.

The Liverpool boss confronted Tierney on the pitch after the full-time whistle, saying: ‘I have no problems with other referees, only you.’

When asked if Spurs striker Harry Kane should have been sent off for a tackle on Andy Robertson during the game, Klopp told Sky Sports: ‘Yes definitely.

‘You can give Robbo a red card, it is not the smartest challenge of his career but that is definitely a red card. No doubt about it. His leg was in the air, it was pure coincidence. Harry cannot judge it. If Robbo’s leg is on the ground it is a broken leg.

‘We have a VAR sitting there and he thinks have a look again at Robertson again. Fine that’s what he is there for. But what did he do in that situation? And then there is the penalty situation with Diogo Jota.

‘Mr Tierney told me Diogo stops on purpose because he wants the foul. First and foremost if you want to shoot you have to stop because you cannot do both.

‘It is always helpful when you play football yourself. When you see the situation back [Jota’s penalty appeal], the VAR is there.

‘Why is he stopping? I don’t understand. The draw is fine. We are not crazy enough to think we cannot draw at Tottenham but these situations are crucial.

‘I have no idea what his [Paul Tierney] problem is with me.

After investigating Klopp’s comments, the FA have decided that no further action will be taken against him.