The identity of Tottenham Hotspur, and what the team will actually look like in the near future, rests on hard calls from two hard-wired personalities.

The first is Jose Mourinho, and whether he can do something he has never done in his career. That is turn around one of those bad runs that feels like it’s terminal. He’s been in this situation a few times before, to the point many talk of the “Mourinho death spiral”. He’s never once got out of it. When it takes hold, it tends to strangle a team, as can be seen in some of the lifeless football.

If that remains the case, it puts the onus on Daniel Levy. He may have to take a decision he really doesn’t want to make, over a managerial reign that feels more associated with him than any previous. Some close to the boardroom even believe he is enchanted by Mourinho, and among the few who still believe this season can end well. Levy did describe the Portuguese as “one of the two best managers in the world”, along with Pep Guardiola, on appointing him in 2019. The brutal reality is that no serious football person has believed that for years. It is a view entirely out of date.

Some around the club already share the view this managerial regime is out of time, that Spurs need to make the change.

Mourinho has so far responded defiantly to this – in public. How he responds behind the scenes, and whether his team thereby have the right response on the pitch, makes for a challenge that is deeply compelling from a pure football perspective as well as a dramatic one.

Whatever people currently think of Mourinho, there is no disputing his claim to be one of the greatest managers of all time. He has the trophies and the credentials. Whether someone of that calibre can figure their way out of this is fascinating.

Some of course believe that it is the very traits that have made him great that have repeatedly created such problems. It is not just that they are outdated, but that they have created a pride in him, where he is desperate to prove they are still effective. It is a common complication among experienced managers. The urge almost becomes more entrenched as each next job suffers more problems.

Many figures who have worked with Mourinho now recognise the same cycle that brought issues – and a diminishing return of trophies – at Real Madrid, Chelsea and Manchester United.

Part of the frustration, and almost the confusion, is that it usually tends to start so well. Mourinho’s charisma is well known, but there is also the clarity with which he speaks about football, especially the opposition. It can be hugely convincing.

This creates an immediate spark, and feel-good form, that players naturally thrive off.

The issue is when that good feeling naturally starts to abate. Players are that bit flatter, but there isn’t the attacking system to sustain performances or results. There is nothing to fall back on.

This is where the complaints that Mourinho overly concentrates on the opposition, or defensive organisation, are so relevant.

It is why Spurs are currently looking almost lobotomised in attack. There isn’t the modern tactical structure.

You can see it in some desperately drab games alone, but some of the stats are damning too.

Spurs are currently 13th in the league for creating chances from open play, with 157. That is the same as Crystal Palace, and less than West Ham, which is remarkable given some of their attacking talent. That talent doesn’t get the ball close to goal enough, though, since Spurs are 16th for touches in the opposition box, on 444.

The consequences of this have created a frustration among fans, but also set the next stage of the cycle.

Frustrated himself, Mourinho attempts to force responses in his squads, and does it in the way he knows best. The Portuguese has talked a lot about his belief in “confrontational leadership”, which is often about provoking players into action. Many recent players, however, have described these techniques as “Mourinho’s games”.

He can blow hot and cold with them, take drastic decisions, and just generally leave them on edge. Many just view them as tedious. They start to create problems of their own, and players can feel singled out, or victimised.

Increasingly, they don’t get the results intended. They do, however, result in the next stage of the cycle.

Mourinho starts making public protestations, which are usually about protecting his own reputation. He points to the quality of the squads – check; his own great history – check; and low points in the recent history of the club – check.

All of this adds up the kind of storm that feels fatal, the beginning of the end. 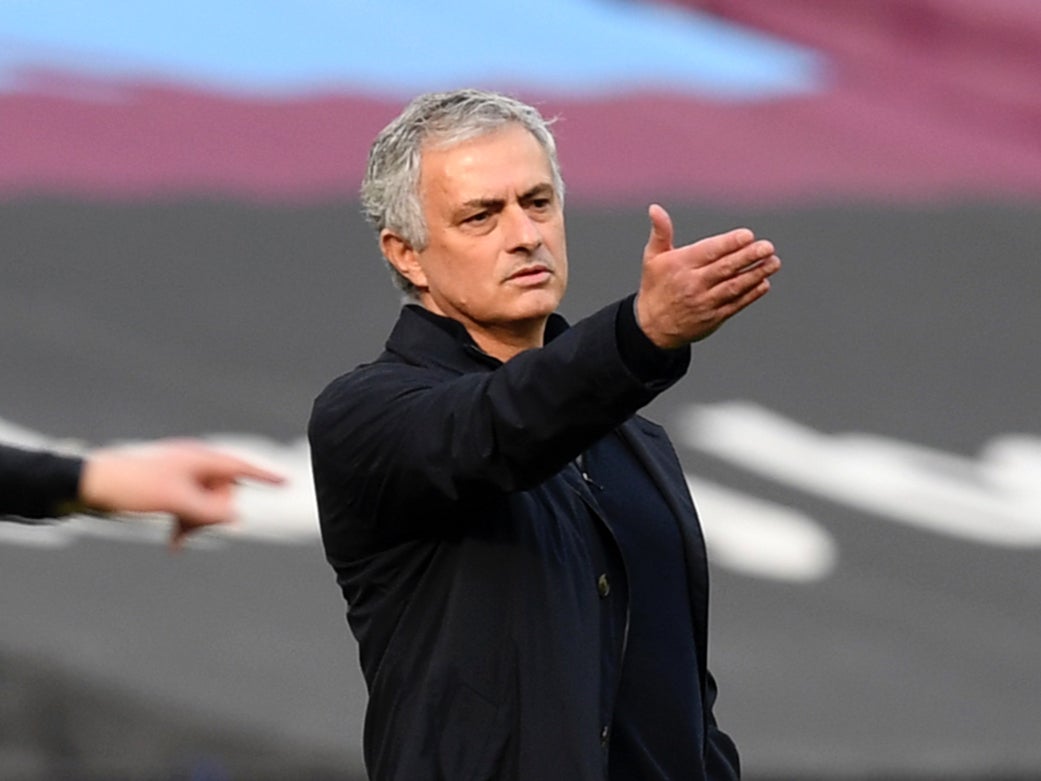 Mourinho is under pressure

It becomes as if Mourinho is trying to manage by grand public gesture, rather than actual managing. The Portuguese tends to get praised for these “defiant” performances in press conferences, but they don’t usually lead to improved performances on the pitch.

This is now what Mourinho has to address. This is where that challenge is.

It isn’t necessarily terminal. There is still a brilliant football mind there, that can come up with solutions.

He still has significant loyalists in the squad, too. Among them are Pierre-Emile Hojbjerg, some of the newer players and – above all – Harry Kane. The English striker loves the freedom and responsibility Mourinho gives him, and sees him as a “born winner”.

The club’s most prominent player is naturally influential, and others are open to persuasion. As Guardiola’s situation has proven, squad complaints are often exaggerated in bad spells. A few wins and all can seem so much better.

Kane and Son Heung-min were in attacking runs that were unsustainable then, but this drop-off is the same. Their sheer quality dictates they will start scoring more again soon.

If that happens, confidence will increase, the mood will improve.

The mood will drastically improve if they win the League Cup. Some might see that final as a lost cause given Manchester City’s form, but Spurs have already beaten them this season, and it is a one-off game. Guardiola’s side can play as well as they have done over the past few months, and just miss a series of chances.

This is one of a few reasons Levy hasn’t yet seriously considered the idea of dismissing Mourinho. There is also the fact they still have a fighting chance for both the top four and the Europa League, which could really be a transformative trophy, as well as what would be a considerable pay-off.

The big question is of course whether that stance can be sustained if this atrocious form continues. The argument would even arise that Spurs would have a better chance in the League Cup final if they made a change.

It would create a real dilemma for Levy. It would come down to the choice between an appointment he almost feels personally invested in, and his famous prudence and sense of logic.

All of that is why Burnley this weekend pose such a distinctive challenge.

On the face of it, it is an entirely winnable fixture. It’s just that Burnley are precisely the sort of defensively awkward team Spurs have struggled against, and there’s not much kudos in getting a win.

Mourinho really needs a series of wins, to change the outlook of the team, and prevent more discussion about a change in identity of the manager.