James Milner is the latest Liverpool star to go down with an injury after limping off against Brighton with a hamstring issue. Milner has been ‘Mr.Reliable’ for Liverpool over the years, playing in a number of different positions to provide cover for Jurgen Klopp.

The versatile midfielder has often filled in on both sides of defence but he was given a rare start in midfield against Brighton.

And he played an important role in slowing down Brighton’s attacking threat.

But disaster struck midway through the second half as Milner was forced off with an injury.

The 34-year-old went down unchallenged with Liverpool’s medical staff rushing to his aid. 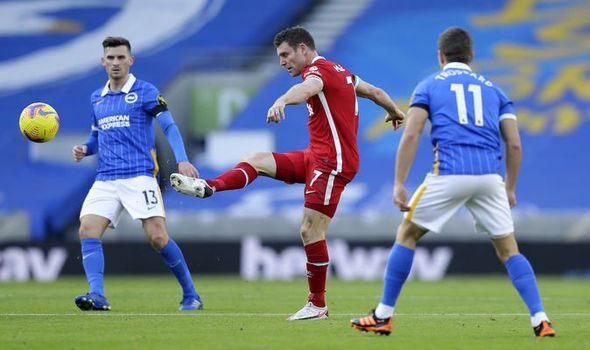 However, it didn’t look promising for Milner as he could be seen clutching his hamstring as he limped off.

The former Manchester City man was clearly in some distress as he pulled his shirt over his face to hide his agony.

Jordan Henderson was brought on at half-time to replace Neco Williams, meaning Klopp didn’t have an option at right-back to come and fill in for Milner.

Curtis Jones was subbed on and played a makeshift role on the right-side of defence.

Klopp though will be hoping Milner’s injury isn’t too serious with games coming thick and fast over the next month.

Trent Alexander-Arnold remains injured for Liverpool, meaning Williams will be relied upon more regularly in the neat future.

Milner also proved his worth last weekend against Leicester as he picked up two assists to help pick up all three points.