Manchester United transfer target Jadon Sancho has copied the tactic of the likes of Harry Maguire and Neymar in delaying a move away from Borussia Dortmund, according to transfer expert Duncan Castles. The Transfer Window podcast’s Ian McGarry claimed this week that Sancho’s 11th competitive cap for England against Iceland on Saturday triggered a bonus payment in his Dortmund contract to the player, his representatives and a family member.

Sancho would not have received that payment if he had moved to United before winning that cap.

However, McGarry claims the 20-year-old can now complete a switch to the Red Devils.

It was thought United were not willing to pay the £108million asking price for Sancho.

But Castles says that it is a common tactic used by players nowadays, to wait until they receive bonuses before completing a move to another club. 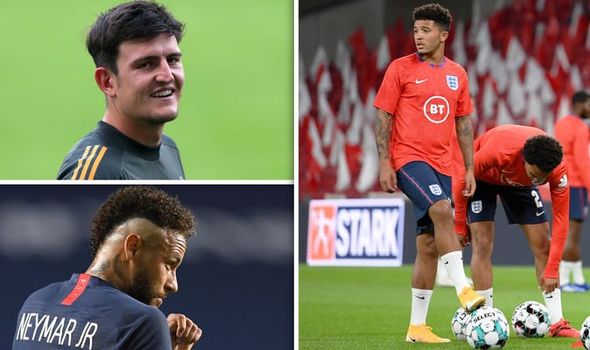 He claims it was a similar situation for Neymar’s world-record £200m transfer to Paris Saint-Germain from Barcelona in 2017, as well as Harry Maguire’s £80m move to United from Leicester last year.

“We see this a lot in modern deals,” Castles said on the Transfer Window podcast.

“Clubs do tend to write loyalty bonuses into contracts, also stage payments to agents, commissions, in the larger deals.

“Why did they wait? Because he was due a loyalty bonus and his father was due an agent’s commission if he got past a certain date before triggering the clause.

“So there was a lot of money, tens of millions of euros at stake in that case.

“Highest-ever fee for a centre-back, Manchester United paid Leicester what they wanted but our understanding on the podcast was that was also a case of Maguire was due a loyalty bonus and there was a payment due to his agent, which delayed the eventual completion of the deal beyond the stage where, in an ideal world, Ole Gunnar Solskjaer would have had the player in and working in pre-season training.”