Barcelona are willing to swap three players for him, Liverpool are keen and even Bayern Munich want him… now with the eyes of the world watching as Bayer Leverkusen take on Werder Bremen, can 20-year-old Kai Havertz shine on the global stage?

All the world’s a stage and all men are merely players. Except Kai Havertz, of course.

Havertz will have the planet’s attention on Monday night as his Bayer Leverkusen side take on Werder Bremen in the Bundesliga. By the nature of the coronavirus crisis and the fact his league are the first back, all eyes are on Germany whenever a ball is kicked.

Not that talent spotters aren’t already aware of Havertz – who at a young age is already a bonafide star. It’s a checklist of the big names when it comes to those who have been tracking the 20-year-old. 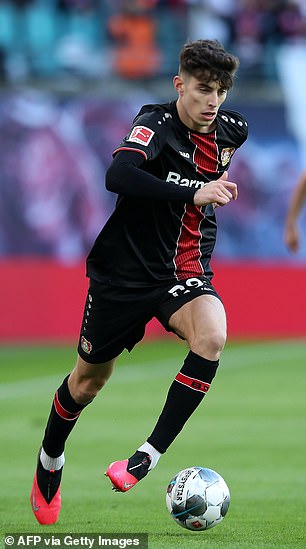 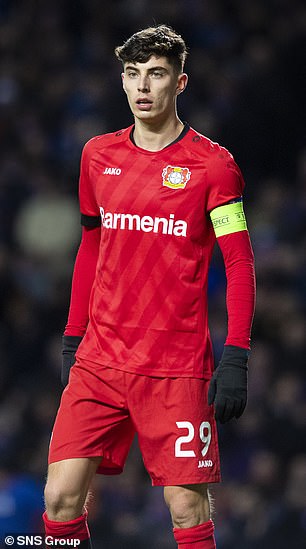 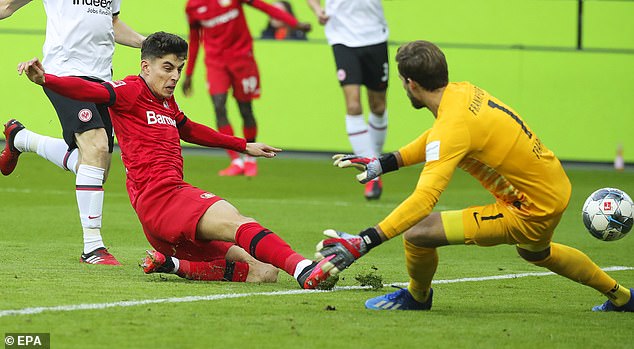 The midfielder is a reported target for the likes of Barcelona, Bayern Munich and Liverpool

That is not the full list – Havertz is on everyone’s radar. But anyone looking for talent for the upcoming transfer window will be tuning in on Monday night.

What they’ll see is a remarkable player, given his age. Havertz made his debut at the age of 17 years and 126 days back in October 2016. He became Leverkusen’s youngest ever Bundesliga debutant in the process.

Since then he has racked up 110 league appearances and 30 goals, although those baseline numbers disguise other elements of his play. 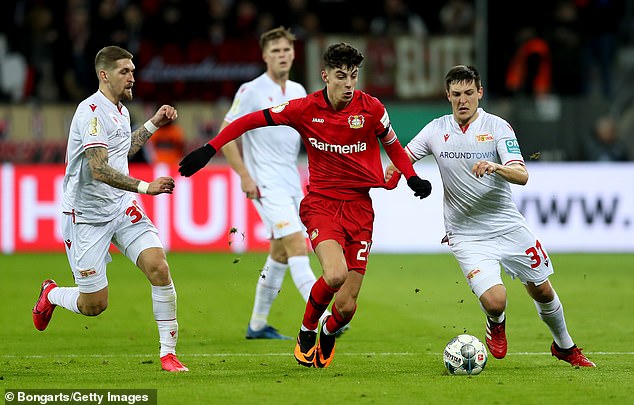 He’s comfortable either as an attacking midfielder or a winger, although he is most adept at playing as a No 10 or as a No 8 with the ability to push forward.

The nature of Leverkusen over the last few seasons means he has been shifted around a lot. He has dealt with four different managers in the early years of his career.

Leverkusen, traditionally one of the big hitters of German football, have only finished in the Champions League places once in Havertz’s years in the first team.

It means experimentation and Havertz has played as a false nine, a winger and a No 6 alongside his preferred positions. 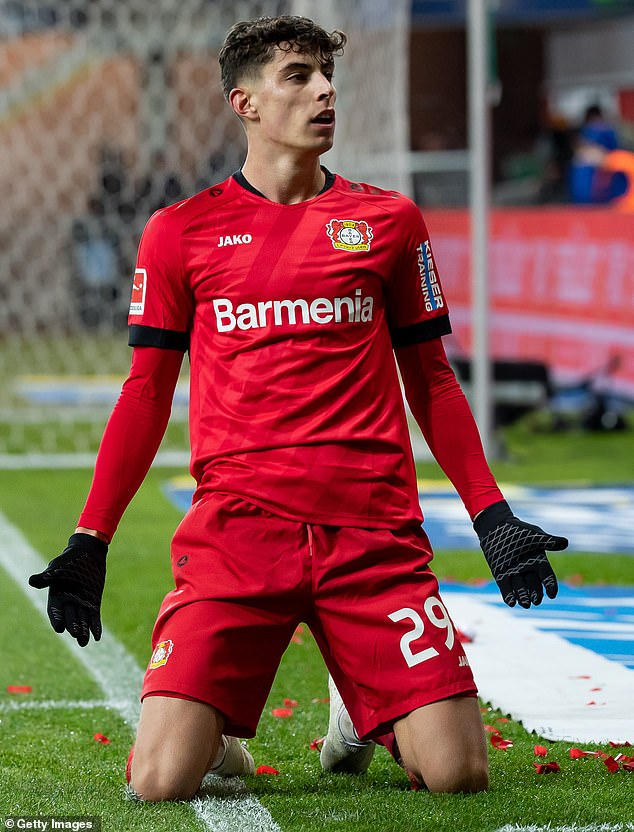 Now, under Peter Bosz, he generally plays as a No 8 and has shone there. Last season he scored 17 goals from that position, taking advantage of the freedom afforded to him by Bosz and Charles Aranguiz, who sits as the deepest midfielder.

This season has been more difficult, with just six goals to his name. He has, though, provided seven assists, giving him a total of 0.43 goal involvements per game in the Bundesliga this campaign.

He has a slight frame but is 6’2″, giving him the height required to get on the end of chances while retaining the silky feet that make him so impressive.

His output last season put him on Germany’s radar – he has since been capped seven times – and manager Joachim Low himself spotted the incredible consistency in his game before handing him his debut. 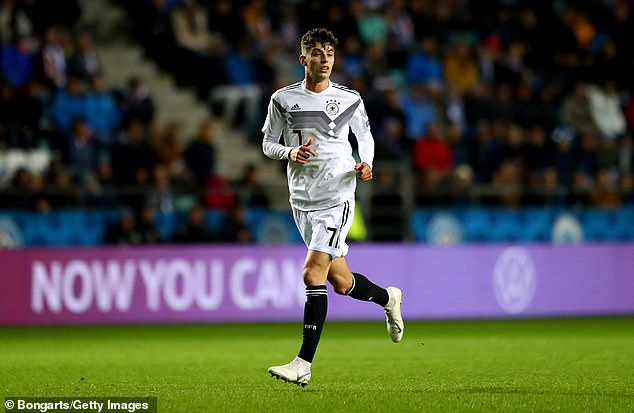 He said: ‘With Kai Havertz I asked myself after the first time he trained with us whether he could’ve already been with us for a year or two.

‘It seemed as if he’d always played with the others. I’ve seen that very, very rarely with a player before.’

Ally McCoist, meanwhile, praised him heavily on TalkSPORT on Monday morning, comparing him to Michael Ballack.

The pundit said: ‘He’s brilliant. I’ve seen him play because obviously Rangers drew them in the UEFA Cup and he looks a bit special.

‘He doesn’t play and look unlike a young Michael Ballack believe it or not. He’s got that. 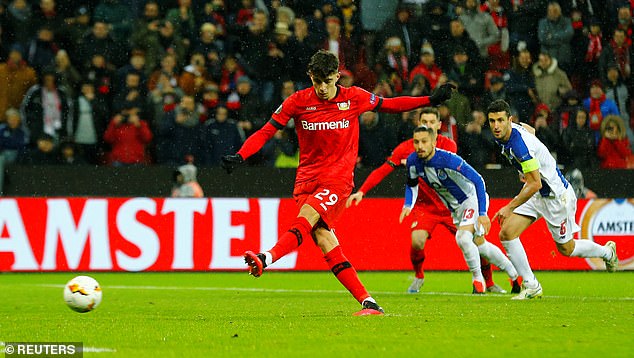 ‘They’re comparing him [to Ballack], which is a little bit unfair, but at the same time he’s got that look about him.

The competition for Havertz will be huge this summer, even beyond those who might take a shine to him while watching on Monday night.

Barcelona have lined up Emerson Leite, their own young prospect Carles Alena and Marc Cucurella as potential options for a swap deal.

They will already have to battle with Liverpool and Bayern, and will not want anyone else to enter the market.

Ballack himself chipped in last week and admitted he was unsurprised at the interest – while calling on Havertz to stay at his former side. 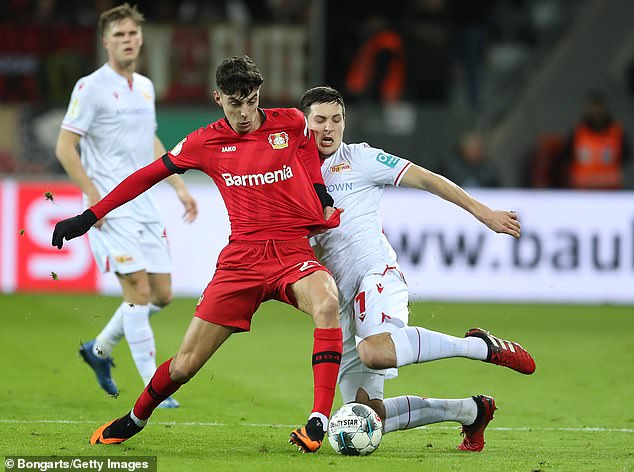 The ex-Chelsea midfielder said: ‘Players with his quality are in demand everywhere. But I think he’s in good hands in Leverkusen.

‘The conditions there are perfect for young, top players and their development. Bayer play attractive football and their training facilities are very good.

‘Leverkusen also offer a cautious environment, and as a player you can make mistakes without being the focus of criticism. You should appreciate that.

‘Of course a player like Kai Havertz has to play in the Champions League, so it would be important for Leverkusen to qualify for it.’

Leverkusen themselves must be hoping a few of the European big hitters misplace their remotes on Monday night. As the eyes of the world turn to Bremen, Havertz will be the centre of attention.