The reject who made it to the big time: How Brentford defender Ethan Pinnock defied expectations to reach the pinnacle of English football

Ethan Pinnock has done both. Rejected by Millwall at 15 and having played the majority of his career in non-League football, he’s now the mainstay of a Brentford team in the Premier League taking on Leeds on Sunday.

So how was his introduction to non-League football at Dulwich Hamlet? 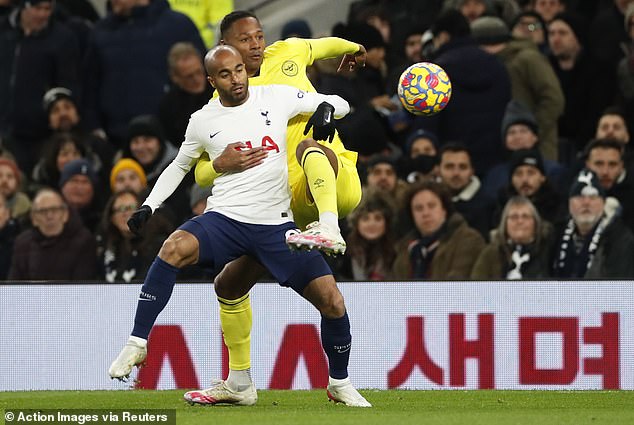 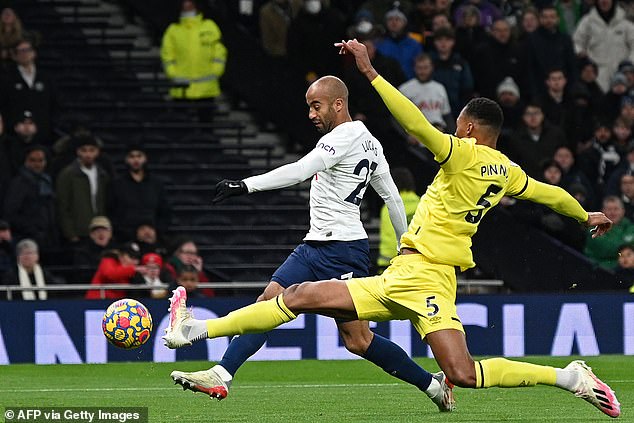 ‘It was my first game, not an actual league game, a pre-season match. I got the ball, passed it on and a striker clattered into me two seconds after the ball had gone. I was 17 and in youth football that never really happens!’

His story is quite the ascent, from seventh tier of the Isthmian League at 22, via the National League with Forest Green Rovers and then on to Barnsley and Brentford.

He eventually made it to the Premier League at 28 and is now more than holding his own there in Brentford’s back three.

‘It’s quite late in my career [to get into the Premier League] and maybe the first few games, there are periods when you look at who you’re playing or what stadiums you’re playing in because you’ve been playing in lower leagues,’ he says.

‘But once you’re actually playing that all gets put on the back seat. You’re focused on your job. We got promoted, we deserve to be here. And we’ve shown we can compete with the best teams.’

Such as against Liverpool, where Salah might have sneaked a goal in against them but Pinnock himself got one up the other end and Brentford forced a 3-3 draw. 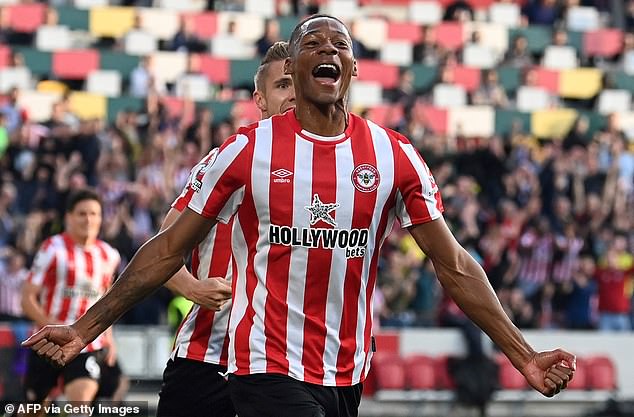 Life on the pitch may be more challenging but it beats the trips to Lowestoft away on a Tuesday night, getting back at 3am and turning out for lectures at the University of Greenwich at 9am that morning.

‘There were a couple of faraway mid-week trips. One I remember is Lowestoft Town. I was at uni all day, rushing to make it in time for the bus. There would be one or two stops along the way to pick up players.

‘After you play the game, then you get home at whatever time it is, and then the next day you have to get up for lectures or players going to work, it’s really tough. From where I had my lectures you could see Charlton’s players training out the window, so we would be doing our lectures and you could see that.

‘A lot of people don’t realise how difficult it is when you’re down there. What you’re getting paid isn’t enough, so you’re juggling two to three things.’

Then there are the challenges, such as the striker who went in on him two seconds after the ball had gone. ‘When you’re up against that every week you become more robust.’

Pinnock isn’t an anomaly, though. Jamie Vardy, Chris Smalling and Troy Deeney are more high-profile names who have evaded football’s academy talent spotters and risen to the highest level. Even at Dulwich, Pinnock wasn’t the first: George Elokobi playing for Wolves and Simeon Jackson for Norwich. 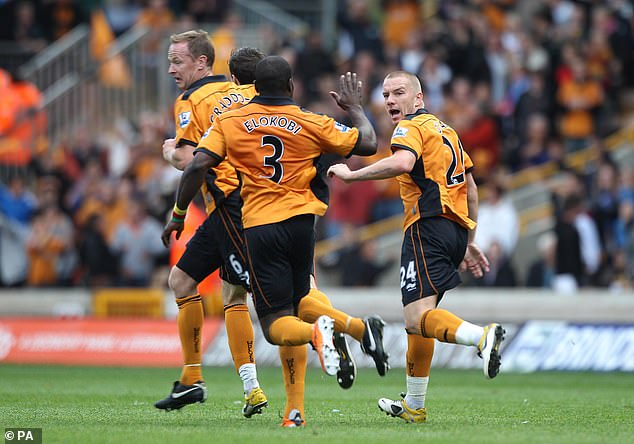 The 28-year-old played at non-league side Dulwich Hamlet, like George Elokobi (centre) 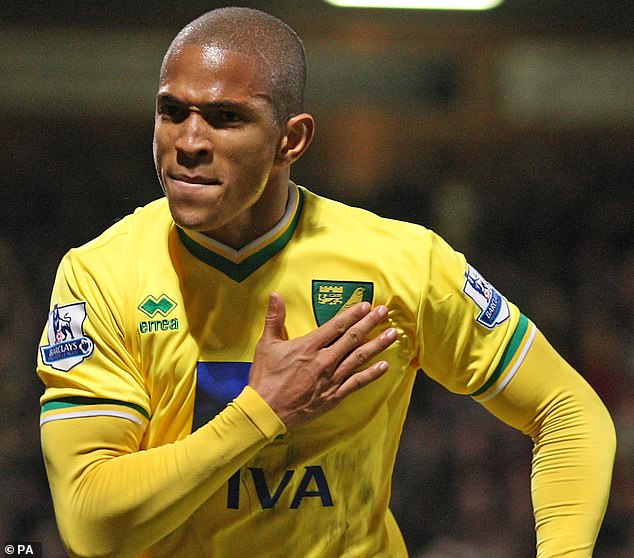 For Gavin Rose, who coached Pinnock at Dulwich from the age of 16 until his departure to Forest Green at 23, it’s evidence that there are multiple paths to English football’s summit. ‘Academies aren’t for everyone,’ he says.

‘Players develop at different times. And with Ethan, he’s only ever played first-team football. He’s never played for academies or Under-23 teams where win or lose it doesn’t matter.’

He was a winger until Rose converted him into a centre-half, illustrating that often academy rejects are simply playing the wrong position. At Dulwich, he even had a trial at Burnley when Eddie Howe was in charge, who also said he thought his best position would be in defence.

Pinnock sensed he wouldn’t make the cut at Millwall at 15. ‘I could feel that it was coming. It was tough at the time, I was there from Under 9s, so even at school people knew that I was the footballer.

‘The specific meeting itself, I didn’t go to. My dad went and they said they were giving me until the end of the season to improve.’

And if that sounds like a euphemism for, ‘you’re not good enough’ that’s because it is. 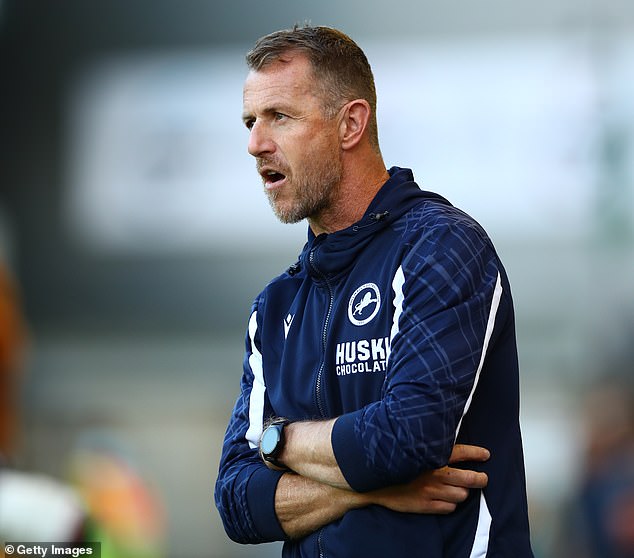 ‘My dad came home and we decided to come out at that point instead of just waiting. That’s when I went to start training with Fisher Athletic (prior to joining Dulwich). It was nice to be in an environment where it was a bit more relaxed, to get that adrenaline back and to get that enjoyment back.

‘I think that was essential. When I was ready to get back into things again, I was in a better place. At the time, they thought I wasn’t physically ready or aggressive enough. I had quite a late growth spurt.

‘I always felt technically I was good enough but maybe at the time I wasn’t as aggressive, or physical or tall as some of the other boys.

‘It just depends on what the club’s looking for and it’s hard to judge as boys develop at different rates and different ages.’

Rose has some sympathy for Millwall. ‘They can’t take everyone on,’ he says. ‘Maybe they had better players at the time.

‘But they can’t be happy because they had him in the building for free and now he’s playing in west London in the Premier League.’