817 days ago Manchester United Women were preparing for their first professional game. On Saturday, they will take on Manchester City already top of the WSL with the chance to go eight points of their rivals.

Sky Sports News has spoken to key figures at the club to find out just how the club has developed so rapidly in the 27 months since their first match.

Twenty-one players were signed in that period by the first-time manager, who was encouraged to apply for the job by Phil Neville after assisting in the England setup.

By the end of the season, United had won promotion to the WSL at the first attempt, topping the Women’s Championship and winning 18 of their 20 league games.

“The fact it was Manchester United in terms of the tradition, the history, the scale of the club and that it was a blank canvass,” Stoney recalls when thinking back to why she took the job.

“I was going to get to build this club from the bottom up, to bring in the players I wanted. I was going to be able to build a philosophy I believe in, create an environment I think will work and the club has allowed me to get on with it.

“To be honest, they knew I knew women’s football better than they did and they supported me through it. It’s a unique opportunity, you never get that in football. Every player is here because I chose them, every staff member is here because I chose them, the philosophy we have is because it’s the one I want to play. You don’t ever get that and for me it’s just a fantastic opportunity.”

Back to the future 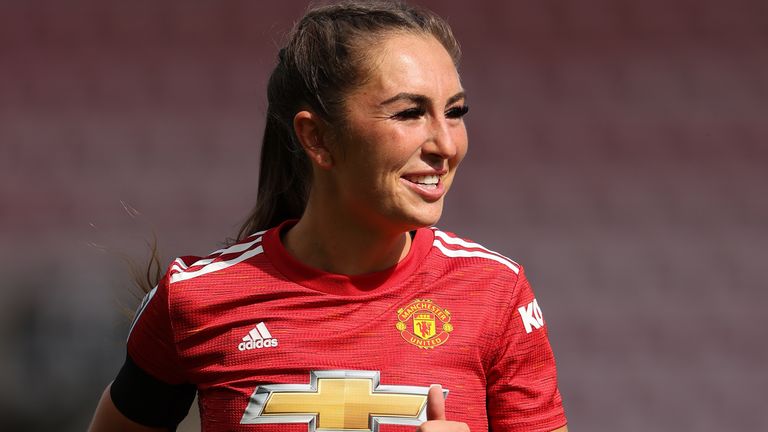 Part of Stoney’s philosophy was to dip into the talent pool the club itself had developed.

Despite the senior team disbanding in 2005, the club’s centre of excellence continued to produce professional standard players that had to go elsewhere to break into the game.

Millie Turner, Ella Toone and Kirsty Hanson were among a group of players who rejoined the club they represented as a teenager and have gone on to become a huge part of the team’s success.

Katie Zelem, who won back-to-back titles with Liverpool before joining Juventus for a season where she also won Serie A, rejoined the club that trained her in her youth. She is now club captain.

She told Sky Sports News: “Before I stepped foot through the door, when they’d appointed Casey as manager I knew they were going for it. I had a presentation with Casey and I played with her at Liverpool; Casey’s a winner. For me I knew I was joining a club that wanted to be the best. I knew the ambition was to reach the Champions League and that’s hopefully where we’re heading.”

“It’s great what the club has done, I love the philosophy of bringing back youth to United. We’ve not just improved as a team but if you look at everyone individually they’ve really improved as players themselves.”

England midfielder Lucy Staniforth and Spain full-back Ona Batlle were among the senior players to join but it was the additions of two-time World Cup winners – Tobin Heath and Christen Press – on one-year deals that excited the fans.

“If you look at our team from the first year to now we’ve got so much more experience,” Zelem told Sky Sports News. “We’ve recruited winners.”

“It’s not just what they’ve achieved on the pitch but they’re also really good people for the group,” added centre-back Amy Turner, whose form has been singled out by Casey Stoney as one of the unheralded reasons for the club’s success.

“They’ve brought that extra bit of confidence and that belief we maybe didn’t have before. You can see the intensity they perform at and when you’re behind that it really eggs you on to match that.” Manchester United’s development as a club took a step up when they defeated Arsenal last weekend – their first league win over one of the established ‘big three’ since their reformation.

The season started by holding champions Chelsea to a draw at home and they go into the derby against Manchester City with the prospect of going eight points clear of their city rivals.

“We haven’t achieved anything yet,” Turner told Sky Sports News.

“After the Arsenal game it felt like something had happened but, as Tobin said in the changing room, it means nothing if we don’t win on Saturday.

“We were like ‘way to bring the mood down, Tobin’, but that’s the mentality you have to have. The league isn’t going to be decided on one game.”

Mentality, hard work, development and a little star power has got Manchester United to the summit 817 days after their first professional match. It will be interesting to see what will be needed to keep them there.