The city of Doha will register air temperatures as high as 41 degrees in the hours leading up to the Socceroos’ World Cup qualifier against China in Qatar on Friday morning (AEST).

But if the work of a Sudanese-born professor known locally as “Dr Cool” has the desired impact, the Australian team will be confronted with a pleasant – even slightly chilled – climate when they run out on the pitch.

In upgrades made to the Khalifa International Stadium as part of the nation’s successful bid to host the 2022 World Cup, the newly renovated stadium includes climate control systems built throughout the stands and alongside the pitch. 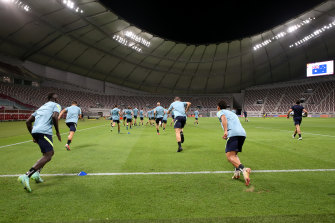 A system of recycled air, filtered and cooled will moderate the climate to between 23 and 25 degrees for Friday morning’s match while potentially reducing the extent of the humidity which would otherwise be more than 60 per cent outside the stadium’s walls.

The system was designed by Dr Saud Abdulaziz Abdul Ghani, a professor and engineer whose studies centre on air conditioning, earning him the nickname “Dr Cool” at the Qatar University. The Khalifa stadium is the only World Cup venue that wasn’t built from scratch but underwent significant renovations for the tournament, including the installation of large covers to prevent outside wind entering the arena and a unique cooling system.

Plastic boxes with air vents are under each seat inside the stadium while 170 larger vents are built alongside the perimeter of the stands, facing the playing field. 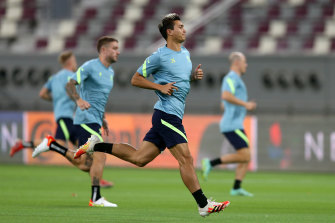 Australia players attend a training session ahead of the FIFA 2022 World Cup Qualifier in Khalifa International Stadium. The pitchside air vents can be seen in the background.Credit:Getty

“The most important thing to cool effectively is that you don’t want the outside wind to enter the stadium. That’s why the size and design of the stadium have to be studied and altered accordingly so that they block warm air from entering the stadium,” he told FIFA in 2019.

“We are not just cooling the air, we’re cleaning it. We’re purifying the air for spectators. For example, people who have allergies won’t have problems inside our stadiums. We have the cleanest and purest air there is.”

While the enclosed Sapporo Dome was the first World Cup stadium to use climate conditioning at a World Cup, in 2002, the venues of Qatar will be the first to apply such technologies to open air, outdoor arenas.

The Olyroos played at the Sapporo Dome at the recent Tokyo Olympics while the Socceroos’ were forced to play their home qualifier against China on neutral territory after federal and state governments would not make concessions for quarantine measures for either team. Doha was selected due to the lack of restrictions in place for arriving teams, the stadiums, proximity to Europe and Asia where all but one Socceroo is playing club football as well as logistical reasons with Australia having to play Vietnam in Hanoi in a qualifier next week. 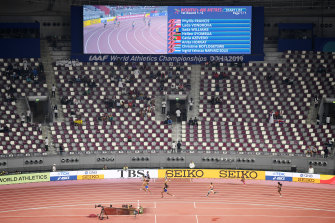 The building of stadiums in Qatar have not been without controversy. Work conditions having reportedly lead to the deaths of more than 6,500 workers, almost all of whom were migrants. Workers from Nepal, India, Pakistan, Sri Lanka, Kenya and the Philippines among other countries were brought to Qatar to build stadiums and infrastructure for the 2022 World Cup but have endured terrible conditions, including long working hours, requirement to work through extreme heat, poor accommodation as well as sub-standard safety measures in place across work sites.

There have also been allegations of state-sponsored slavery committed by the North Korean government relating to the construction in Qatar, who allegedly sent nationals to work on the sites for the World Cup while retaining the overwhelming majority of the workers’ pay.

The Qatar World Cup bid has been mired in controversies since it won the vote in 2010, including allegations of corruption in the bidding process, moving the tournament from June to November to avoid the peak of the summer as well as being embroiled in a diplomatic dispute with other Arabian Gulf nations, who in 2017 called for Qatar to relinquish its hosting rights.

Qatar won the vote for the hosting rights of the tournament, beating USA, South Korea, Japan and Australia at the ballot.