Arsenal had one foot in the quarter-finals of the Champions League before Wednesday night’s game against Hoffenheim. They are through, just, but they came incredibly close to a shock exit as they fell to a humbling 4-1 defeat.

The German side had to win by five clear goals to leapfrog Arsenal into second place in Group C and given they were beaten 4-0 by the Gunners in October, there didn’t seem to be much hope.

But three goals in four second half minutes had Arsenal on the rocks and, in truth, they are lucky they are still in this competition. 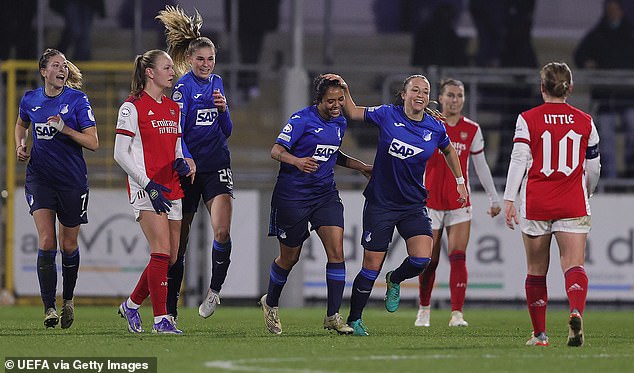 It has been a difficult month for Jonas Eidevall’s side, who were beaten 4-0 by Barcelona last week after losing the FA Cup final against Chelsea. Sunday’s 4-0 victory over bottom-of-the-league Leicester perhaps papered over the cracks that have started to form.

Arsenal’s defence look lost without Leah Williamson, who is out until after Christmas with a hamstring injury. Eidevall desperately needs his influential centre back fit and back in his starting XI but he may feel he needs further reinforcements in January’s transfer window.

This defeat against a young Hoffenheim side, who had just two players over the age of 24 in their squad, is worrying for the Arsenal boss. 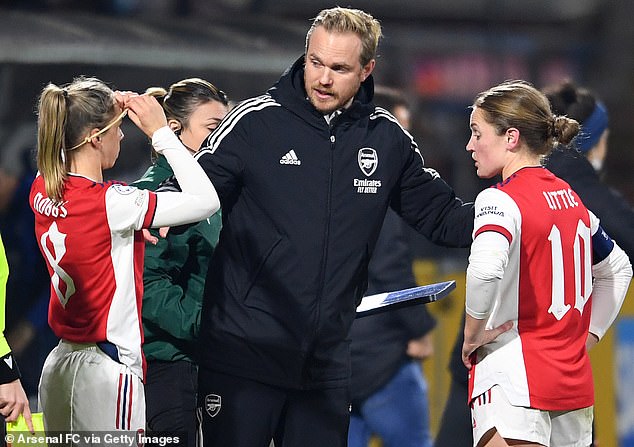 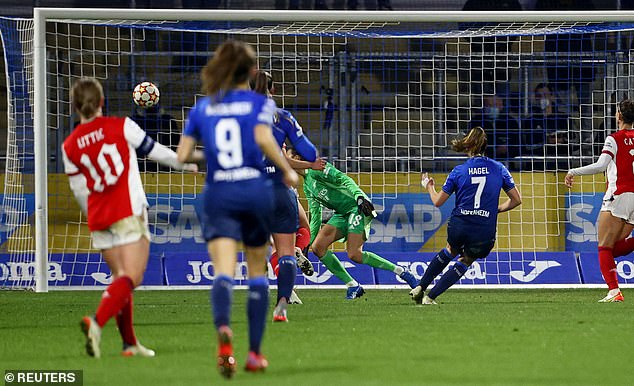 ‘I think it’s one of those psychological things, it’s the worst thing in the world to feel like you lose something that is basically 100 percent secure before the game, you can really feel that. I feel it, I think the players feel it as well. It’s a terrible feeling to feel like “is this gonna slip through our hands?”

‘We had this five minute period in the second half which is unacceptable being Arsenal. The mistakes we do here and how easy we give goals, we can’t do that against any opponent. And then it is a positive that we could recompose ourselves into the game. We definitely created more scoring opportunities in the last 30 minutes. Then we go through, it’s a weird feeling.

‘We are giving away some very easy goals. I think it’s been a common theme from us since coming back from this international break and we really have to put a stop to that. Because the highs in the game are still good but that lows, they’re not good. We keep making easy mistakes and we need to stop that. It’s impossible to win football matches when we do that and we need to do better. It’s as simple as that.’ 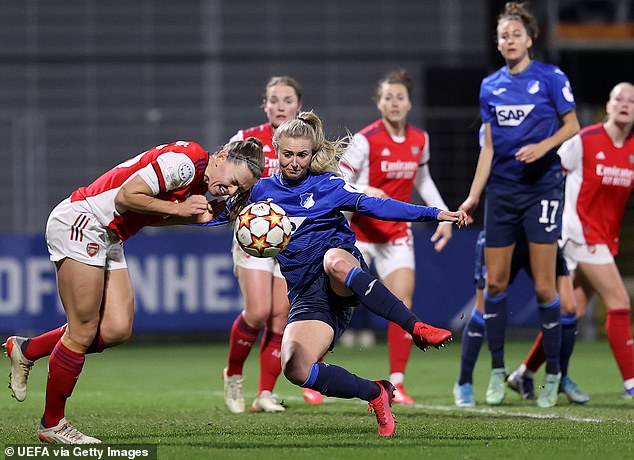 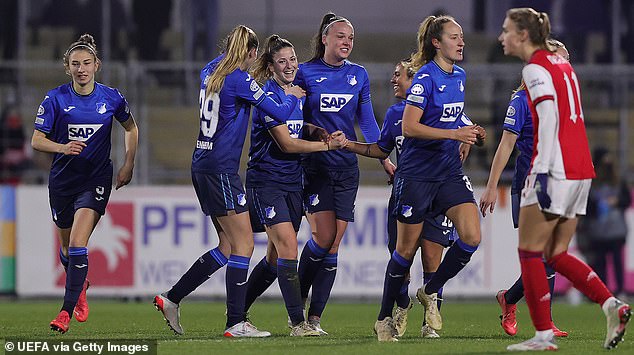 Hoffenheim manager Jurgen Ehrmann had said he wanted his side to play on the front foot and they made a lively start before finding the opening goal in the 21st minute.

Gia Corley beat Anna Patten to the ball and outpaced Lia Walti before laying the ball off to Jule Brand, who kept her composure to dink the ball past Lydia Williams at her near post.

Arsenal needed a bit of luck to get back on level terms before half-time. Beth Mead’s initial shot was spilled by Hoffenheim goalkeeper Martina Tufekovic. Laura Wienroither beat Mana Iwabuchi to the ball at the back post but could only turn into her own net.

But the Gunners did not start the second half any better than they did the first and quickly found themself trailing once again. Chantel Hagel beat Frida Maanum to Sarai Linder’s cross and side-footed into the top corner to make it 2-1. 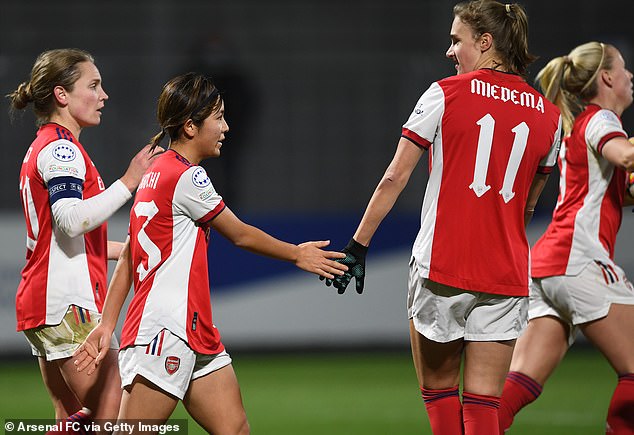 It went from bad to worse for Eidevall’s side as Hagel added another two minutes later. Jean Beattie gifted possession straight to the Hoffenheim striker and she took two touches before curling a finish past Williams.

Two minutes later it was 4-1 and suddenly Arsenal were panicking. Corley got in between Katie McCabe and Steph Catley to head home Brand’s cross.

At this point, Vivianne Midema called her team-mates into a huddle as they tried to calm things down.

Eidevall decided it was time for action, too, and brought on Jordan Nobbs and Nikita Parris. Those subs seemed to help stem the flow of Hoffenheim’s attacks and the Gunners just about managed to see out the remaining half an hour.

Miedema had a great chance to pull a goal back in the 89th minute but Tufekovic made a great 1v1 save to deny the striker.

This is a night Arsenal will want to forget but it is job done, just.