Sydney FC, Melbourne Victory and Perth Glory will reluctantly fulfil their AFC Champions League obligations in Qatar later this month after they were threatened with a $300,000 fine and two-year suspension from the tournament if they withdrew.

Players and coaches from all three clubs had raised major health and wellbeing concerns over the prospect of playing in COVID-challenged Doha, as well as the impact of another two-week stint in quarantine upon their return to Australia and how it could affect their preparations for the upcoming A-League season. 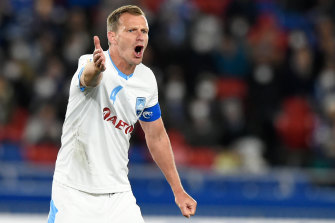 Sydney FC captain Alex Wilkinson and his troops will finish off the AFC Champions League.Credit:Getty

But the Asian Football Confederation, who are under pressure to complete the tournament and meet broadcaster demands, have refused to budge and told clubs there would be heavy sanctions if they chose not to compete – including a severe $300,000 penalty, a two-year ban from the ACL and the responsibility to bear any other losses the AFC would have suffered as a result of their decision.

The clubs, Professional Footballers Australia and Football Coaches Australia met on Wednesday morning to discuss the situation and agreed they had little choice but to play on, despite the reservations shared by all three parties.

Earlier this week, they wrote to Football Federation Australia, who helped assuage some of their concerns around the AFC's hub protocol plans, insurance implications and whether foreign players would be allowed to return to the country, but left the final decision on whether to go to the clubs.

PFA co-CEO Beau Busch said it was disappointing the AFC had not consulted with player unions across Asia, through FIFPro, before locking in the times, dates and location for the ACL, and was hopeful collaboration would improve ahead of next year's tournament, for which Sydney FC have qualified and Melbourne City and Brisbane Roar have earned play-off berths.

"We've seen really effective engagement between FIFPro, the European Clubs Association and UEFA. There hasn't been that same level of engagment [in Asia] and that's something we'd really like to see going forward, to make sure the players' voices are heard and their concerns are answered directly by the AFC as well," Busch said.

"What's being asked of players and coaches is significant. It's a really challenging situation. The Asian Champions League is a really important tournament, it's just this time around it comes with significant challenges as well."

FIFPro released a statement on Thursday morning, saying it was "disappointed and concerned" that the AFC had not spoken to its affiliated player associations in Australia, Japan, Malaysia, South Korea or Thailand.

"Furthermore, we have not received any information about the outbreak of COVID-19 in the tournament’s so-called 'medical bubble' during the western AFC region competition in September," the statement said.

"As the globally recognised representative of professional footballers, we respectfully call for openness and direct consultation in the Asian football competition planning decisions as happens in other continents. 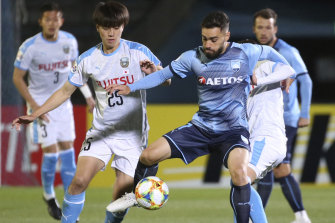 "It is necessary now more than ever because of the ongoing COVID-19 pandemic. The players whose health, financial situation and careers are on the line deserve to be part of these decisions."

A-League teams are still at risk of missing out on Christmas with their families, with any team that progresses beyond the round 16 to be trapped in quarantine in Australia until after December 25. Anyone who does contract COVID-19 in Qatar, which is reporting around 200 new cases per day, would also have to stay in the country until they test negative.

With the new A-League season to kick off on December 27, clubs whose returns are delayed or who are unable to conduct field training during quarantine – which may be the case for Perth Glory, who are keen to fly direct into WA on the way home – will be accommodated by flexible fixturing for the initial rounds of the domestic campaign.

The cost of hotel quarantine and the requirement to meet security and police costs for their 14-day stint was one of the biggest concerns for A-League clubs, who are already cash-strapped after a reduction to the competition's broadcast deal and a year mostly without ticketing income.

Sources indicate some players could yet make individual decisions not to travel, based on their own personal and family circumstances, with the blessing of their clubs.

"Strictly from a coach's point of view, they're always going to want what's in the best interests of their players," FCA president Phil Moss said.

"There's still some complexities to work through with regards to everyone being on the plane, but certainly the level of collaboration between the players, the clubs and the coaches was exceptional … we're a lot more comfortable [now]."