‘Any fans in the world want to win games, and we’re not quite doing that’: Harry Kane sympathises with England fans who BOOED after their dire 1-0 loss away to Italy sealed their relegation in the Nations League

Harry Kane said he understood why England fans were booing after their 1-0 defeat to Italy in Milan on Friday night.

Away fans were vocal in their anger after the UEFA Nations League defeat, which saw the Three Lions relegated from the top tier of the competition.

England have not scored in open play in over 450 minutes of action – and lost to Giacomo Raspadori’s second half goal. It has raised the pressure on Gareth Southgate less than two months ahead of the World Cup in Qatar. 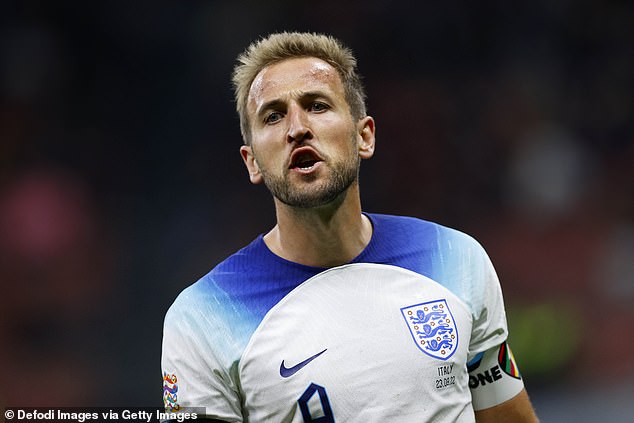 After the game, captain Kane told Channel 4: ‘I think overall, we had the better chances in the game. One fine moment for them with the ball over the top, and they scored. Even from that moment, we dominated.

‘At the moment, it’s not quite falling for us. One of those things. Preparing for November, coming to places like this is really good preparation. We dust ourselves down, we learn from it, and we get ready for Monday.’

After five matches without a win, or even a goal, Southgate and the team back in England are going to look over what the side have to do to overcome this run.

‘We’ll have to assess that,’ Kane said. ‘You’re playing against top opposition. You don’t get loads of chances in these type of games. Not quite clinical enough, with the crosses, with the finishes.

‘It’s been a disappointing few games. It’s part of football, you learn, you move on. We’re preparing for the biggest tournament of all in a couple of months time. We need to make sure we’re ready for that.’ 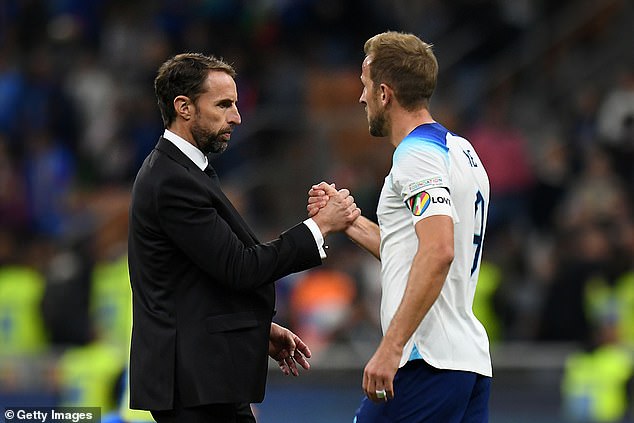 Gareth Southgate’s England side have now gone five games without winning, or even scoring

He said that the England camp are not losing confidence despite the poor run of form, especially ahead of an important World Cup winter. England finished fourth at the last World Cup in 2018, and expectations had been high for a similar performance, especially after they were runners up at Euro 2020 last year.

When asked if the squad felt less confident following recent results, the captain told Channel 4: ‘I don’t think so. If you saw the way we played today, I think we dominated with the ball. We created chances, especially in the second half.

‘There’s no need to panic. We know what we’ve achieved over the last four years, we know what we want to achieve going forward. This is a spell that’s disappointing for everyone, but we’ll move on, and make sure we’re ready for Monday.’ 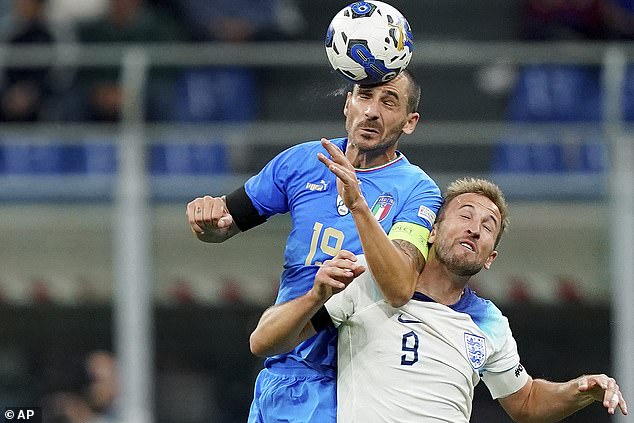 Kane felt that England were the better side, but were undone by one good ball over the top

Next week, Germany travel to Wembley, after they also lost 1-0 on Friday, at home to the group’s surprise package, Hungary.

Kane urged England fans to: ‘Get behind us, as they always do. Playing at home against Germany, it doesn’t get much bigger than that.

‘We’ve done a couple of fantastic major tournaments in a row, and I’m sure they’re looking forward to November. We’ll try and put in a great performance and win the game. Regardless, we know we’ll have the full support come November once we get to that World Cup.’ 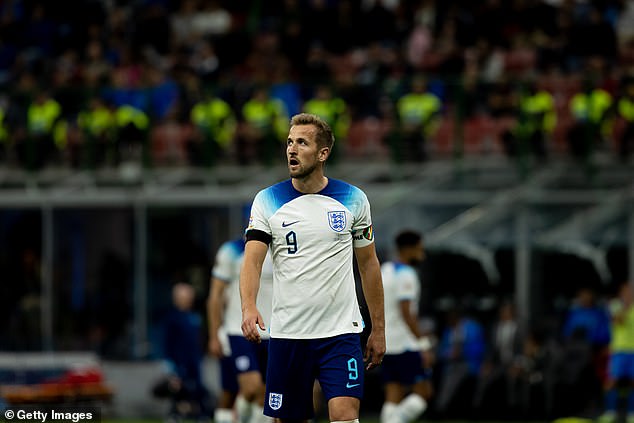 However, he was totally understanding of those travelling fans in Milan who booed when the referee’s final whistle was blown.

‘Of course, we’re not winning games. Any fans in the world want to win games, and we’re not quite doing that,’ Kane said.

‘We need to learn, we need to move on. Another big game in a couple of days. Hopefully we can win that, and that will be great preparation for a couple of months time.’

The Germany match is England’s final chance to play together before the beginning of the World Cup on November 20, with the Three Lions playing their opening match against Iran the following day.