The finish may have been improvised but Rhyan Grant's unorthodox match-winning goal for Sydney FC in Sunday's grand final was a routine hatched straight from the training ground, perfected at the death of their biggest game of the season.

The opportunity took 100 minutes to come to fruition and saw Grant use his chest to score the only goal of the game in Sydney FC’s win over Melbourne City, but came about via a set play the Sky Blues worked tirelessly on the training ground leading into the grand final. 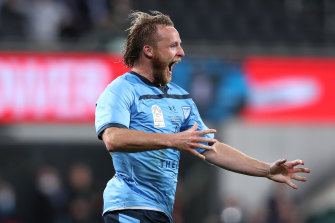 "Tonight I said to Bimbi before the game, I said it felt like I was going to score," Grant said.

"We were just having a joke but in the back of my mind I felt I would have been a chance. I tend to get a few chances every now and then and felt tonight I would get a little bit lucky and it fell that way."

The Sky Blues had to overcame a sluggish start to the match and were lucky not to have conceded early.

A Harrison Delbridge goal for Melbourne City was controversially ruled out by the VAR for a player being offside but not contacting the ball, deemed to have blocked Sydney FC goalkeeper Andrew Redmayne's line of sight.

That let-off for Sydney FC kicked them into gear, according to Corica, who admits his side were outplayed up until that point.

"I thought they played really well, especially for 15-20 minutes, they shocked us a little bit [and] they were on top," he said.

"I thought the goal helped us a little bit – the disallowed goal, it woke us up a little bit and I think from then on in, we controlled the game. I think definitely in the second half and in extra time, we had the better of the chances."