There is a reason Pep Guardiola called him the best English manager in the game right now, but Graham Potter is only interested in beating Everton on Monday Night Football and keeping Brighton in the Premier League for another season.

Potter first came to many people’s attention in this country during Ostersunds’ historic run to the 2017-18 Europa League knockout phase, including a memorable 2-1 win at Arsenal in the round of 32 by the Swedish minnows.

It was during his successful seven-year spell working at Ostersunds that Potter, who guided the club to victory in the 2016-17 Svenska Cupen, developed a reputation for playing possession-based, attacking football with players comfortable in a tactically-flexible formation. 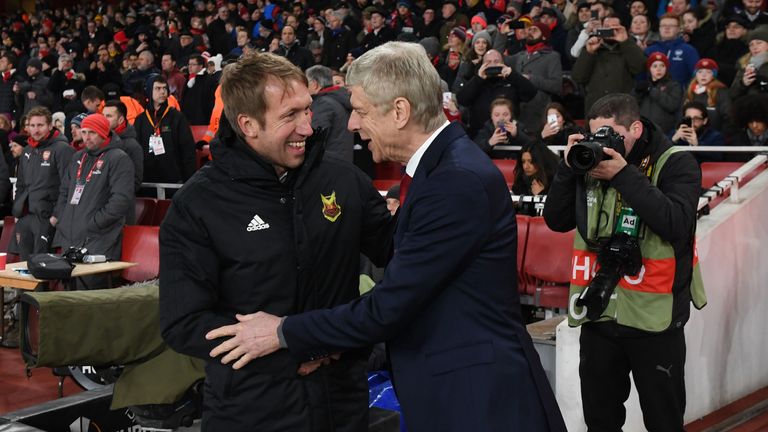 The Englishman has since taken that philosophy with him from Scandinavia to Swansea City in the Championship and now on to Brighton, who he took charge of in May 2019 after replacing the hugely popular Chris Hughton at the Amex.

However Potter, 45, kept the Seagulls up with a game to spare in his debut season at the helm, with Brighton recording their highest Premier League points tally (41) and number of goals (39), while also securing their joint-best finish (15th) in the Premier League era.

Despite some outside criticism, Potter has stayed true to his principles, as seen during January’s hard-fought 1-0 loss at champions-elect Manchester City when, with Brighton languishing just two points and a place above the drop zone after a demoralising nine-game winless run, the visitors still stuck to their beliefs on how to play the game.

“As a spectator, I like to watch these teams. I like watching Brighton play. I recognise it.

“When I was a football player, I would love to play in this team.”

While clearly flattered by the City manager’s words, though, Potter is not looking for validation for his work. “You always have to think about things from your own perspective, you should not necessarily seek validation from outside, just because it is somebody’s opinion does not necessarily mean it is the truth, it is just an opinion,” he said ahead of the MNF clash with Everton.

“And that is the same if it is positive or negative as there is a lot of negative opinion out there as well. But obviously from a weight of opinion and who you are going to listen to, Pep Guardiola in terms of understanding football, there is clearly a weight there as opposed to someone who has no experience or no knowledge of football and has an opinion.

“But I do not necessarily need an external person to say, I believe in what we are doing and the work I’ve done in my career and how I’ve gone about things, how I work, the staff, the people here, the players.

“We have made progress and I think you can see an exciting future, but we have to also understand the reality of where are at – and that is fighting for points in every single game, starting against Everton.”

Brighton head into Monday night’s home clash with Everton on the back of a narrow 2-1 loss at Manchester United in a game in which they had led for long periods.

But despite the visitors only going down to a late Mason Greenwood strike, Potter refuses to dwell on that, instead focusing on what his side needs to do better.

“It is always tricky analysing a defeat at Old Trafford,” he said. “On the one hand you have to say that the opponent is a top team in the league, and considering where we have come from as we played them twice in the league last season and did not really get near them at all, well beaten in both games.

“And this year we have played them twice and probably unlucky not to get anything, certainly the home game we played really well and deserved something from the game.

“The other night, if we are being honest, we were not really on top of our game, we can play better and do better and that is what we need to focus on and we need to be honest and say that, because ultimately, if you are not playing well, then it is hard to go to those places and get points. And that is the learning point for us.”

Another area Potter will be desperate to improve is Brighton’s wretched Premier League home form, with the club having to wait until January 31 to taste success on the south coast this season after a 1-0 win over Tottenham, their first victory at home since they beat Arsenal in June.

Since Potter took over at the Amex, no other top-flight team have won as few home matches, or collected fewer points, than Brighton.

“We have drawn a lot of games and on reflection we could have… and you do not want to be that ‘could have, should have….’, but again, the margins at this level are so small that you only need to turn a few of those draws into wins and it looks a lot better, especially with our away record,” he said.

“That is where we are at and we do not really have any time for hard-luck stories or to feel sorry for ourselves, we have to make sure we finish off these eight games as strong as we can and use everything we have learned over the last however many months and try and get the points we need to stay in the Premier League next year.”

One positive for Brighton ahead of Everton’s visit is their last display at the Amex, a resounding 3-0 win over fellow strugglers Newcastle last month which Potter hopes his players can build on between now and the end of the campaign.

“We did play well and got the result, so it becomes easy for us to say that, but we actually played well against Crystal Palace, Aston Villa, Fulham, Tottenham – we have actually played well, but we have drawn,” Potter said. “But it is something we have to improve completely.

“But the players also understand the relationship between performances and results, they are not stupid and we have to maintain that and that is what I said about the Manchester United game – if we do not perform really, really well, to our top, it is hard for us to get points in this league.

“So we have to make sure we do that as even if you play well, it does not guarantee you as that is how hard the competition is. We have to carry on keep being humble enough to stay in the competition, ambitious enough to try and win matches and that is what we are trying to do.”

Interestingly, Brighton have exactly the same league record as at this stage last season, only with a slightly better goal difference, and yet Potter believes there has been definite and visible progress, especially since they returned to action last June.

The Seagulls beat Arsenal 2-1 in their first game back after lockdown – the club’s first top-flight victory of 2020 – to complete a maiden league double over the Gunners, while this season has seen them win 1-0 at champions Liverpool to register a first league victory at Anfield since 1982.

“Yes, absolutely in terms of the performance (he is seeing progress), subjectively with my eye and then there is enough data out there that suggests yes, we have improved,” he said.

“And like I said, if you compare the two matches we played against Man Utd last year to this year, as just a basic one there was a huge difference.

“So yes (there has been progress), but at the same time we also know the points is the same, so that is the bit that stops you being really, really positive and excited for the future, because we still have the points that we have and we have to respect that and then keep working to change it.”

Starting against Champions League-chasing Everton, who are next up at the Amex on Monday evening in a contest Potter knows will test his side to the full.

“As you expect from a team of that quality, with Carlo Ancelotti as a manager and the investment they have had, they have a really, really impressive squad, lots of intelligent, top players that can score in lots of ways.

“They can score from wide, combinations through the middle of the pitch, James Rodriguez has an unbelievable set-play delivery, as does Gylfi Sigurdsson, they have big, physical players who can attack and defend the box well.

“So they are a really, really good Premier League team and a club with a fantastic tradition, history and culture. And they are ambitious and so want to push to the next level and that is what they are fighting for and we are fighting for something different, but we have to make sure we are there to compete.”