Kyiv: Striker Alassane Plea scored a hat-trick as Borussia Moenchengladbach crushed their hosts Shakhtar Donetsk 6-0 on Tuesday to take over from them at the top of their group in the Champions League.

Glabdach, who conceded late equalisers in their previous group matches against Inter Milan and Real Madrid, scored four in the first half, with two coming from the 27-year-old Plea, to kill off the game and eventually earn one of the largest away wins of the competition. 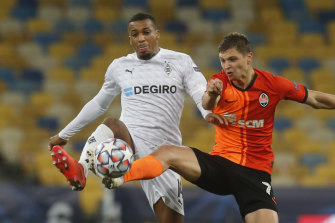 Alassane Plea, left, netted twice in the first half en route to his hat-trick for Borussia Moenchengladbach.Credit:AP

They are now top of Group B on five points from three games, one point ahead of Shakhtar.

Inter and Real, on two and one point respectively from two games, play each other later on Tuesday.

Gladbach, now on an eight-game unbeaten run in all competitions, caught Shakhtar by surprise with a two-pass counter attack and Stefan Lainer finding space down the right to cut back for Frenchman Plea, who scored with a crisp finish in the eighth minute.

They doubled their lead nine minutes later when Christoph Kramer's shot from outside the box took a deflection from Valeriy Bondar to send Shakhtar keeper Anatoliy Trubin the wrong way. 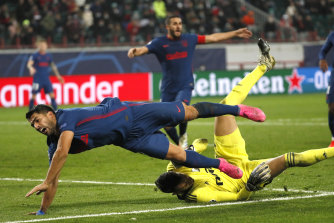 A Plea missile from 25 metres put the game beyond the hosts before Ramy Bensebaini added a fourth a minute before the break.

Lars Stindl made the most of a Trubin error to put his team 5-0 ahead in the 65th, before Plea beat the offside trap to complete his hat-trick with a fine finish.

Atletico Madrid, meanwhile, were held to a 1-1 draw at Lokomotiv Moscow in their Group A match after the home team's goalkeeper Guilherme pulled off a string of superb saves to keep the Russian side in the hunt for a last-16 berth.

The result left Atletico second in the group on four points from three games, two behind Bayern Munich who were playing Salzburg away later on Tuesday. Lokomotiv have two points and Salzburg one.

Centre back Jose Gimenez fired Atletico ahead in the 18th minute with a fine header from 13 metres after an inch-perfect cross by Hector Herrera, a minute after Guilherme kept out a Saul Niguez shot.

The home side levelled in the 25th after a lengthy VAR check deemed Herrera to have handled the ball in the penalty area and Anton Miranchuk sent Atletico goalkeeper Jan Oblak the wrong way with a perfect spot-kick.

Angel Correa hit the crossbar for the visitors with a curling shot from 25 metres on the half-hour and Atletico continued to pile on the pressure after the break as Guilherme twice denied Joao Felix.

Koke headed against the woodwork in the 66th minute with Guilherme beaten but Luis Suarez saw his rebound ruled out for offside as Lokomotiv hung on desperately in front of a noisy contingent of home fans.

A last-gasp intervention by Murilo Cerqueira denied Felix a sitter in the 80th minute, with Lokomotiv struggling to keep possession and barely able to break out of their own half.

Atletico swarmed all over the hosts in the last 10 minutes but Lokomotiv's packed defence somehow held on, punting long balls upfield whenever they could to run the clock down.