Rico Lewis kickstarted attacks, showed tenacity and fully justified Pep Guardiola’s faith in him in Man City’s win over Leeds… the 18-year-old kept Joao Cancelo and Kyle Walker on the bench and we will be seeing much more of him

Rico Lewis has played better than this and that is perhaps the most significant indication that Manchester City seem to have another serious prospect on their hands, because as full Premier League debuts go, this was not bad at all.

He operates at right back but then to say that is not really doing Lewis justice, having spent half of last night tucked beside Rodri as an auxiliary midfielder. And looking as if he had been doing it for years. Tactical dexterity should not come quite this easy.

Barely 18, the teenager from Radcliffe – a little town nine miles north of the Etihad Stadium – is now a fully-fledged member of the globetrotters. Pep Guardiola predicts that is where he will remain for years to come and it is hard to argue with that synopsis. 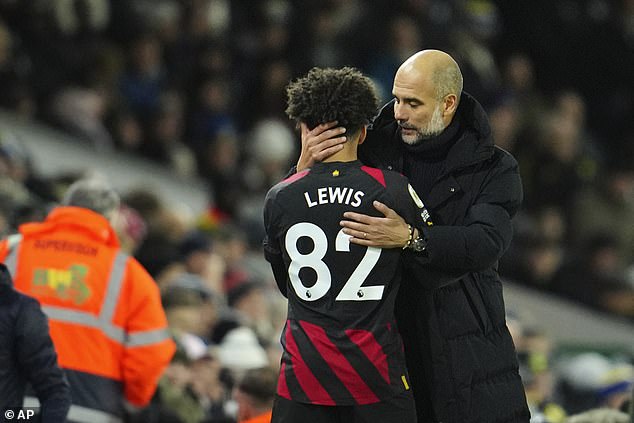 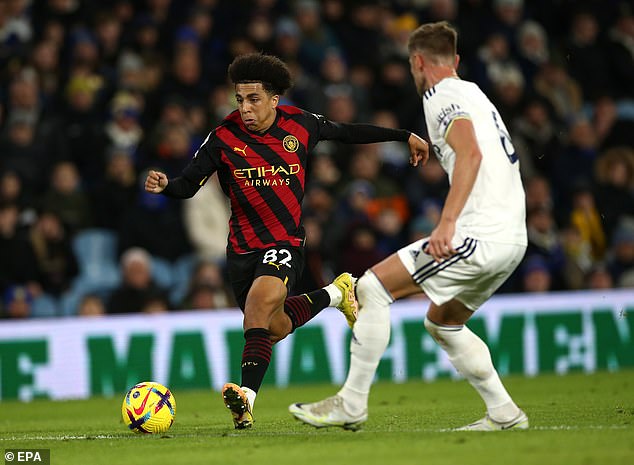 Here is defender who was not even on Guardiola’s radar six months ago but the manager was very pleased with his evening’s work in a febrile atmosphere that has shrunk far more experienced men, embracing Lewis as he earned a deserved rest. His first touch, inside the opening seconds, happened to be a no-look pass so nerves were never going to be an issue.

The trust placed in Lewis by the coaching staff is self-evident, yet even more obvious given Guardiola left both Kyle Walker and Joao Cancelo on the bench for a fixture against a Leeds United team the City boss claimed he would rather not have been facing straight off the World Cup. Guardiola reasoned that he simply could not drop the academy graduate after starring in the Carabao Cup before Christmas.

‘For the way he played against Liverpool, it would be unfair to not let him play again,’ Guardiola said. ‘It’s almost impossible to play better than him but I had the feeling that he has to play.’ 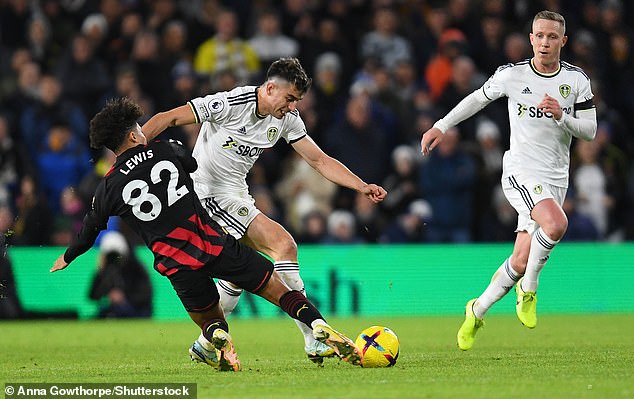 And play he did, showing absolutely no issues with the osmosis that comes with being a full back in a Guardiola team. Lewis was developed in the Guardiola laboratory that is City’s academy and it shows.

A good scanner when off the ball and boasting the sort of spatial awareness required to thrive in this environment, there were a few occasions where he kickstarted attacks.

And he might have collected a couple of assists had Jack Grealish and Kevin De Bruyne converted cutbacks. He stood up to the tricky Willy Gnonto, shepherding and defending dutifully. He even picked up a booking for a tactical foul, which is another square on the Guardiola bingo card. 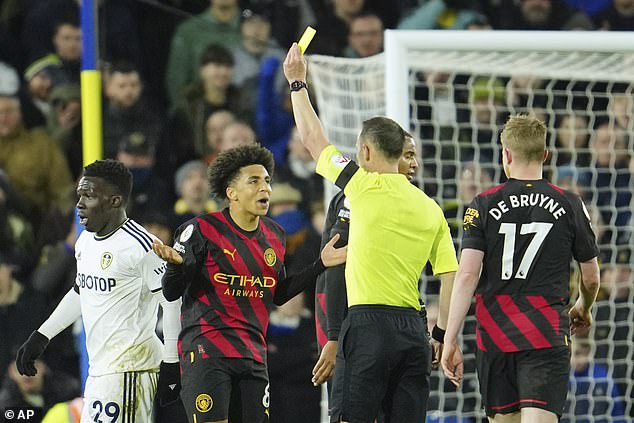 But it was a moment when this remained goalless, nine minutes before the break, that truly caught the eye – and it was straight out of his dad’s Muay Thai gym, where he spent so many years training and learning that craft as a child.

Lewis briefly dawdled in the centre circle, something you cannot do at Elland Road, and Marc Roca robbed him. Leeds appeared to be on their way in a dangerous area, with plenty of City’s red and black shirts ahead of the ball.

Before Roca could progress from his first touch, Lewis was on his feet and diving in, somehow retrieving his mistake and setting City away. Five seconds later Ilkay Gundogan was going close from the subsequent counter. Guardiola clapped. We will be seeing more of Lewis.