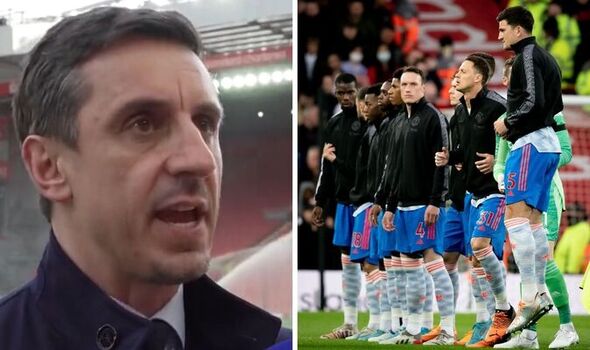 The Reds demolished United 5-0 at Old Trafford earlier in the season and it appeared as though a similar scoreline was on the cards early on Tuesday night. United’s defence was all at sea when both Trent Alexander-Arnold and Salah raced down the right wing with Diaz free in the middle.

Salah found his strike partner as Diaz scored Liverpool’s opening inside five minutes. The Red Devils were unable to get out of their own half as Liverpool’s pressure continued as they hunted down for a second goal.

And it came in spectacular fashion in the 22nd minute after some excellent football between Joel Matip and Sadio Mane. Matip fizzed the ball into Mane’s feet, who dinked a brilliant first-time pass over the top of Harry Maguire and into the feet of Salah, who finished expertly past David de Gea to send Anfield into raptures.

While Neville waxed lyrical about Liverpool’s build-up, he was left furious by the state of play by United.

“Let’s be clear, this United team are a waste of space,” he said on Sky Sports. “But the football Liverpool have delivered here is absolutely sublime.

“That pass from Mane, that touch from Salah and that finish are world class. It’s why Liverpool go into these last 10 or 11 games of the season in an unbelievable position to sweep up.”

United came into the game knowing they had a chance to hurt their rivals’ chances of clinching a historic quadruple. But their last victory against Liverpool at Anfield came back in January 2016 with United failing to impress on the red side of Merseyside.

Ralf Rangnick had opted to change his system to try and keep Liverpool’s frontline at bay by starting three central defenders. Phil Jones was brought in for just his second Premier League start of the season with Victor Lindelof and Maguire playing alongside him.

United confirmed earlier in the day that Cristiano Ronaldo would not be in the squad to face Liverpool following the tragic death of his baby son.