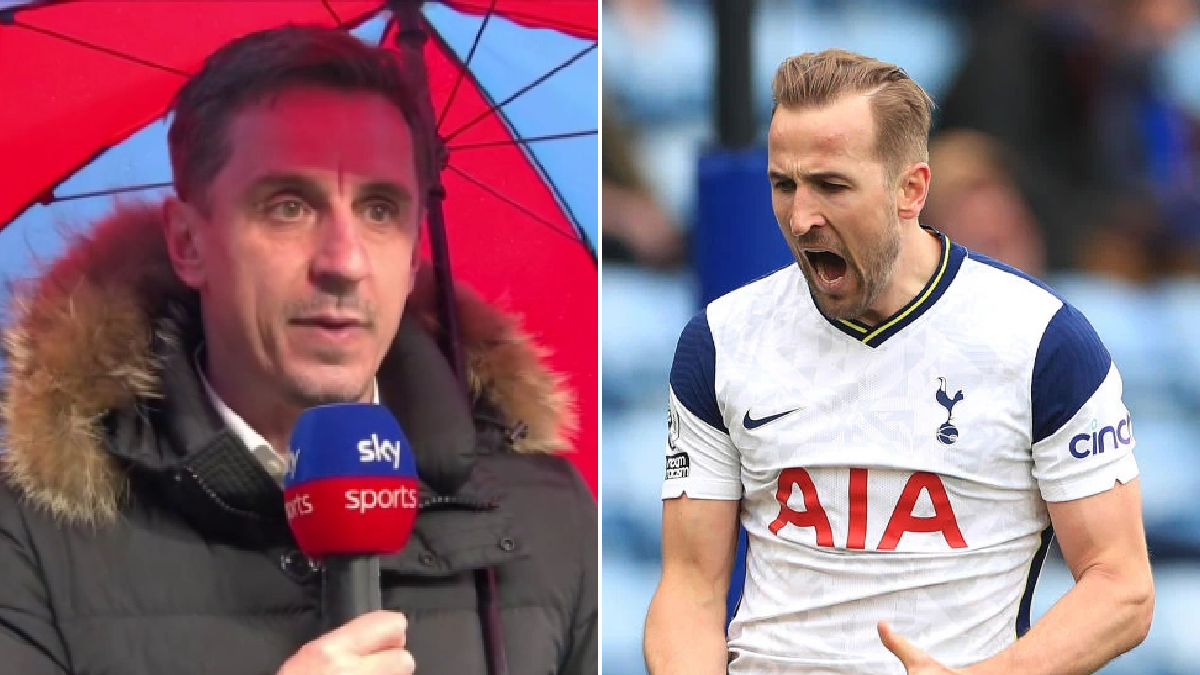 Gary Neville believes Manchester United could hold an advantage in the battle to sign Harry Kane because they have a trio of players Tottenham might be tempted to accept in part-exchange.

The 27-year-old forward, who claimed the Golden Boot and Playmaker of the Year award after a remarkable individual season, recently opened the door to leaving seventh-placed Spurs as he looks to add trophies to his own personal accolades.

Neville knows it will take a mammoth fee to convince Tottenham to sell, but feels the inclusion of players such as Anthony Martial, Dan James and Jesse Lingard might be the ideal deal-sweetener.

Speaking on Sky Sports after the final round of Premier League games, he explained: ‘It’s difficult. City don’t tend to break their budget do they, £65m/£70m [is their transfer record] – they’re not going to get him for that.

‘So it’s whether they could get a player to Tottenham that would makeweight the deal. And I think that’s what United maybe have in Martial, James and Lingard.

‘They’re types of players you could send there [to Spurs] plus a chunk of money and it might make Daniel Levy happy, I don’t know.’

‘I don’t know what part of the interview people think he said that. He said there was a conversation to be had and if the chairman wants to accept a bid for him. He never said he wanted to leave.

‘I think he’s obviously at a point in his career where it’s a reflection point. It’s the same for Tottenham as well I would think.’

United have also been linked with Jadon Sancho and Raphael Varane in addition to Kane, and Neville feels it would take that level of star-studded investment for the anti-Glazer sentiment from supporters to begin to ease.

Asked if that trio might quell the protests, Neville said: ‘I think it would appease a lot of the fanbase in terms of obviously the ones that want to look at signings – the ones that have been appeased before.

‘I think there is an element of the fanbase that are not going to let this go but I think that there will be some to be fair, if they sign Harry Kane, Varane and Sancho – it will cost a lot of money – but it’s the type of thing that would quieten some of the fans down and create incredible excitement at Old Trafford.’