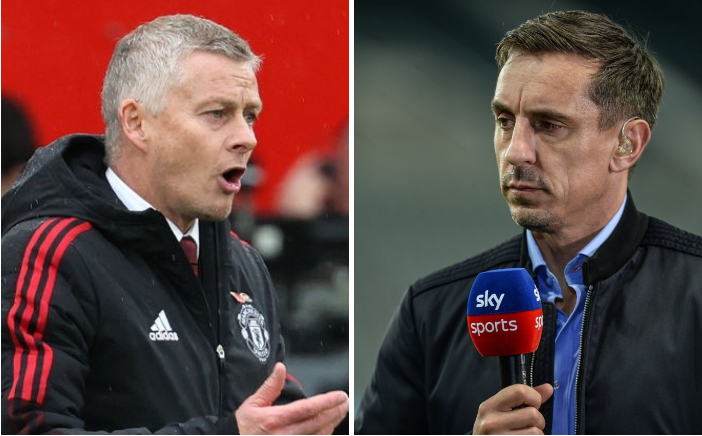 Gary Neville maintains he will never call for Manchester United to sack Ole Gunnar Solskjaer, but admits his former teammate has been guilty of making a ‘silly’ and ‘glaring’ error this season.

A dismal run of form which culminated in Manchester City’s embarrassingly comfortable 2-0 win at Old Trafford prior to the international break has again left Solskjaer clinging to his job.

The two-week hiatus did little to quell the speculation that United are already making plans to hire a replacement, even if they may bide their time and wait until the end of the season.

Neville, who shared a dressing room with Solskjaer for 11 trophy-laden years, has been placed in an awkward position in his role as a lead pundit for Sky Sports with the Norwegian’s position appearing increasingly untenable.

No matter how deep the crisis, however, Neville is adamant he will never call for a managerial change but concedes Solskjaer’s failure to address the lack of balance in his team earlier this season, shoehorning in too many attack-minded players, represented a baffling error of judgement.

‘This season has been a shock and they have a horrific week coming up,’ he told the Mail Online.

‘The signing of some very good players adds further condemnation to these recent performances. I think United with this squad should challenge for the title. But we are in a really bad position and it’s heartbreaking to watch Ole.

‘For Man United fans who loved him and ex-players who still love him. It’s not easy commentating on a former team-mate. I think Ole not sorting out the compactness of the team earlier was silly. It was a glaring tactical omission.

‘I am happy to say that. Not good enough. But I just won’t say the other thing. Not about Ole or any manager. I never have.’

Despite his personal relationship with Solskjaer and several other members of the United coaching staff and current hierarchy, Neville has been reluctant to make contact, aside from text message at the height of criticism aimed at the current manager.

‘I text Ole that once because I thought it was getting that bad,’ he added. ‘But I don’t have any football communication with them, even when my brother [Phil] and Giggsy [Ryan Giggs] were working at the club.

‘A sporting director at another club asked to meet so he could give me some insight on his place and I said no. It would compromise me.

‘I don’t have a personal relationship with anybody in football including at United.

‘It means I can speak openly on TV about anything or anybody.’